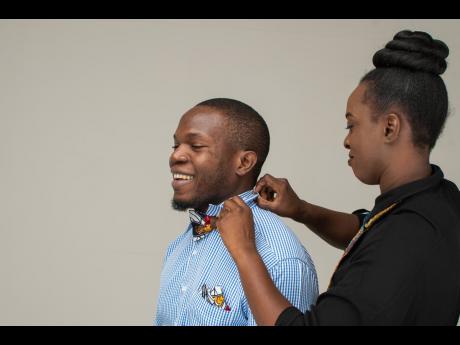 Whether silk or cotton, plain or bedecked with rhinestones and glitter, there’s one thing you know for sure, putting a bow on it will make it better. The often under-appreciated bow tie takes centre stage every year on August 28 when the style savvy – men and women – come together to celebrate this simple yet fashionable accessory. Locally, fashionistas have growing options with several purveyors of bow ties popping up, but few are anything like the colourful, customisable dapper accessories from MeLine Fashions by Spanish Town-based designer Celia Williams.

A current student of the Edna Manley College of the Visual and Performing Arts pursuing a BA in Arts Management, Williams is a fiercely independent mother of one son, and an entrepreneur who epitomises the spirit of the creative industry. She describes herself as the professional woman of tomorrow, being focused, hard-working, goal-driven, and dedicated with an outgoing and free-spirited personality that is reflected in her pieces.

Catering to her male MeLine Fashions customers, Williams specialises in custom-made bow ties made from fabric including African prints. The company recently launched its bow tie line, which is a reflection of Williams’ fashion-forward style and creativity, adding that she believes “Bow ties are no longer just for formal wear, these can be worn to just about anywhere these days. Our men are not boring, and when you see a man in a bow tie you tend to pay attention. I mean you see it and automatically you think he’s a gentleman.”

Ironically, bow ties were in fact the original ‘professional’ attire, traditionally worn by professors, architects, attorneys and even politicians, having been descended from the more formal cravat. Somewhere along the line though, these once-noble pieces of male attire became synonymous with the socially awkward and just plain odd. However, over the past few years the bow tie has been regaining its rightful place as a trendy accessory for men. Unlike other more staid forms of fashion such as the top hat and coattails, bow ties seem to have somehow managed to remain a viable option for the male wardrobe. If you have the courage for it.

For the last six years, Williams has been providing her customers with what she considers as artsy, bold, sophisticated and contemporary pieces of wearable art, and chooses to use African prints to embrace the history and culture of her forefathers and their struggles and triumphs. “MeLine Fashions bow ties always have that edgy side that will give any outfit personality when being worn. Men are able to wear a nice button-down shirt, a wool sweater and fitted tailored pants and compliment that outfit with a bow tie,” explained Williams.

Hylton agrees that bow ties are indeed creeping back towards becoming a staple in a man’s tie collection. Williams urges men to embrace the bow tie and celebrate on International Bow Tie Day with bold and unapologetic statement bow ties to complement their wardrobe. She asserts that it’s an item of clothing men can incorporate daily into their corporate looks.

“It is true that some men are so uniquely partial to bow ties that their bow ties have become the signature elements of their look. For such wearers the bow tie is emblematic and that’s the way these men like it. For the average man, the semi-strategic use of the bow tie as a device to establish a trademark look is something of a double-edged sword. Men who wear bow ties now and then wish to enjoy the bow tie option without being labelled ‘the bow tie guy’.”

International Bow Tie Day was established to celebrate the glory of the bow, and the amazing power it has to make anything it’s placed on infinitely superior to what it was before. Annually Heineken celebrates the day and acknowledges the men of the world, whether you love this style for its retro-cool factor or quirky connotations, International Bow Tie Day marks the one day when the bow tie reigns supreme.