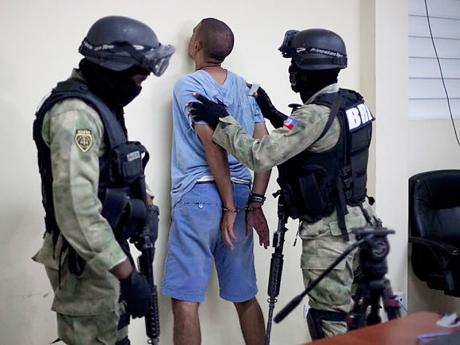 Clifford Brandt is placed against the wall at the police station after his arrest in Port-au-Prince, Haiti, Tuesday, August 12. Brandt was taken into custody in the Haitian town of Cornillon, near the border with the Dominican Republic, Communications Minister Rudy Heriveaux said. - AP 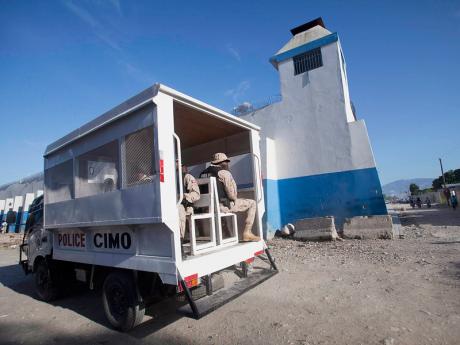 A police truck passes next to the main prison in Croix-des-Bouquets, Haiti, on August 11. An attack on the prison on the outskirts of the capital to free the son of a prominent businessman being held on kidnapping charges resulted in the escape of 329 inmates. - AP
1
2

On Monday, August 11, Jamaicans awoke to a wave of panic, stemming from the news that the Haitian National Police were seeking international help following a prison break that freed a prominent businessman and allowed hundreds of other inmates to escape.

It was reported that a commando of 10 to 15 heavily armed men had pulled off a spectacular jailbreak at the Croix-des-Bouquets maximum-security prison, freeing 329 inmates, and wounding two guards. The police declared that the raid was an inside job, and launched an investigation.

Out of the 329 escapees, however, the Haitian government decided to first focus on the search for one fugitive by the name of Clifford Brandt Jr, as it was widely believed that the freeing of Brandt was the reason for the incursion. The government offered one million Haitian gourdes for his capture.

Who is Clifford Brandt Jr, who could have triggered such a brazen assault, and whom the Haitian government was so anxious to apprehend?

The amazing story of O.J. Brandt

It would be impossible to study the history of Haiti from 1920 to 1976 without discussing the power and wealth of Clifford Brandt's great-grandfather, Oswald John Brandt, whose influence on the Haitian economy, and successive governments, is legendary.

Throughout Haiti's turbulent history, powerful political exiles have sought refuge in neighbouring Jamaica. O.J. Brandt was born in Jamaica in 1890. He found himself gravitating towards those exiles, and assisting them in many ways while they were in Jamaica. In 1910, he fell in love with a young Haitian woman by the name of Therese Barthe, who came to visit her father, also exiled in Jamaica. The two married, and when Therese returned home shortly afterwards, O.J. followed his heart, and migrated to Haiti. He was only 20 years old.

In Haiti, Brandt became the toast of the town. His wife's uncle was a powerful army colonel, and all of the exiles he had befriended in Jamaica had returned home to take up prominent positions. Among them, Septimus Marius, who was appointed minister of finance, and established the National Bank of Haiti. Fondly remembering services rendered by Brandt in Jamaica, Marius gave him a job at the bank.

In 1919, the Royal Bank of Canada opened a branch in Haiti. Brandt made a transfer to the Royal Bank. Rapidly rising through the ranks, he was named managing director in 1925. In 1928, Brandt left the bank to go into business for himself.

From 1915 to 1934, Haiti was under US occupation, and opening up to foreign capital. Brandt was well-placed to take advantage of myriad opportunities. When Haiti entered the Second World War on the side of the Allies, the possessions of German families, who were some of the richest in Haiti, were nationalised, and sold at fire-sale prices. Despite his own German origins, Brandt received the lion's share of the House of Reinbold, the biggest conglomerate in Haiti, acquiring cotton, soap, textiles, and cooking oil factories.

He dominated the import-export sector, bringing in pharmaceutical products, European cars, equipment, and luxury items, and exporting agricultural products, coffee, and cacao. He was also in the insurance business, and fully immersed in the black market. He established his empire and completed his meteoric rise to the pinnacle of Haitian society, becoming a powerbroker and kingmaker, putting governments in power, and toppling same, controlling, bribing, corrupting, sponsoring, subsidising, and financing his way to absolute power, until his death in 1976.

In 2004, after the kidnapping of President Aristide by US Special Forces, and his subsequent exile to South Africa, a deadly wave of kidnappings was unleashed on Haitian society, reaching its peak in 2006. The first suspects were outraged Aristide supporters, inner-city gangs, and deportees. But despite several raids by police and UN forces on inner-city slums, resulting in many arrests and extrajudicial killings, the kidnapping scourge persisted.

On October 16, 2012, the two children of one of Clifford Brandt's business rivals, Robert Moscoso, were abducted by armed men wearing police uniforms. A US$2.5-million ransom was demanded from Moscoso, the chairman and CEO of Sogebank, one of Haiti's biggest banks.

One week later, Brandt was arrested, along with 14 other accused members of his criminal syndicate, sending shock waves, and shaking the very foundations of Haitian society. Brandt, in handcuffs, brought police to the empty house where the bound victims were rescued. He was charged with kidnapping, false imprisonment for ransom, assassination attempt, smuggling of firearms, fraud, forgery, usurpation of title, criminal conspiracy, illegal possession of weapons of war, illicit enrichment, money laundering, and issuing death threats.

The Brandt kidnapping ring and murder cartel was revealed by local and international investigators to be one of the most sophisticated and powerful criminal syndicates in the Caribbean. During questioning, Brandt allegedly confessed that he was only number 5 within the leadership hierarchy of his organisation, implicating the eldest son of the president, members of the Haitian elite, members of the president's private security, and police brass.

The arrest of one of the richest men in Haiti, bent on destabilising Haitian society, and the implication of his peers, has launched an extensive debate on the function and role of the Haitian elite within the society, reviving age-old, thorny issues of greed, corruption, treachery, and the disconnect and alienation of that class from the rest of Haitian society.

Two days after his escape, Brandt and two other fugitives were apprehended by Dominican soldiers, as they tried to enter the Dominican Republic. Twenty more escapees have since been recovered. Brandt is still in pretrial detention.

Myrtha Désulmé is the president of the Haiti-Jamaica Society, and the Haitian Diaspora Federation's vice-president for Advocacy and Public Policy Caribbean & Latin America. Email feedback to columns@gleanerjm.com and myrtha1804@gmail.com.