CHEC it and dam it 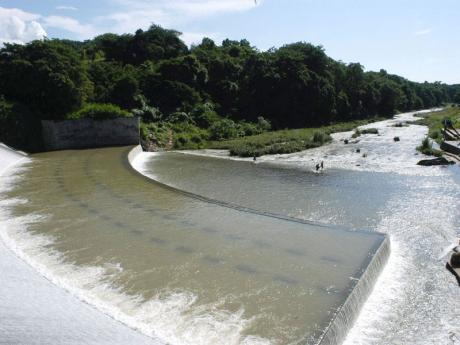 A section of the Rio Cobre dam in St Catherine.- File

Thank you, China Harbour Engineering Company (CHEC), for completing the first part of the highway system which bypasses Mount Rosser. We will be forever in your debt. Actually literally, it will take 50 years for the financial obligations to be fulfilled, after which the road will be turned over to the Jamaican people.

That means that the Jamaican, who is yet to be born, will be around 25 years old when it is settled. Approximately half of Jamaica's population is 25 years old and older. Therefore, with an average life expectancy of 74 for this country, the majority of us will not live to see that day. But at least Vybz Kartel will have been out a good 14 years and with his modified complexion, will easily blend in with the new immigrants.

Now, let's make it clear, if the Chinese had not stepped in, the project would have been left in fallow, like a cane piece after reaping, with no idea as to when work would recommence, much less be completed. French contractors, Bouygues Travaux Publics had quit because of the failure of the Jamaican government to come up with more euros, despite Jamaica having spent around US$120 million. It is up to the public to say whether or not it was money well spent. Projected to fork out US$610 million, around US$75 million is estimated to have been chop-sticked to complete this leg. We were left with little choice but to go with humility like Kwai Chang Caine in the Shao Lin temple and take our licks as we learned a hard lesson in governance and management of our economy and infrastructure.

This looks like a more demanding deal than that which was struck with the French a decade ago. Although they delivered top-class roadways leading to Portmore, Clarendon and the Spanish Town roundabout, the toll on the Jamaican populace will only be felt for another 20 years. Nevertheless, Napoleon's descendants also required their pound of filet mignon. Their agreement binds the government to increase the toll or compensate the developer if there is any reduction in traffic levels on the toll road due to "the carrying out of works by or on behalf of the Government of Jamaica which: (a) provides a new rail public transport passenger link between Spanish Town and Kingston; or (b) enhances the speed or capacity of competing roads within the transport corridor served by the toll road".

In simple language, government can only touch-up Mandela; it cannot be widened, even if it wanted to make it fair for the fare paying commuter, who does not take the yellow chi chi buses.

Further CHEC reveal that a feasibility study is going to be commissioned with a view to damming the Rio Cobre and hopefully damn the dependence on foreign electricity and increase the supply of potable water as 'well.' Of course, when it comes to Chinese and rivers, I am as nervous as a Black American driver with blue lights flashing in his rear-view mirror. I rather like the Rio Cobre as it is, with the crocodiles, derailed trailers and assorted junk in the Bog Walk gorge, and I truly fear that it might become as polluted as the Yangtze and Yellow Rivers in China. Nonetheless, if it can truly have a major impact on the domestic and agricultural water supplies and provide a renewable energy source, then "doh je" and "xie xie ni".

However, nothing in life is for free and it is reported that 1,200 acres of land had been promised to CHEC by the Government to facilitate development plans in St Catherine. With 'baited' breaths we await the Government's choice because the Goat Islands comprise just over 600 acres, and they are located in St Catherine, in spite of being part of the misleadingly nomenclatured Portland Bight.

The former Jamaica Labour Party (JLP) administration feels shafted for not being given credit for the engaging of CHEC. Indeed, that party has a solid record of accommodating foreign firms in exploiting our natural resources. In 1947 it passed the Mining Regulations. Under this piece of legislation, any prospective mining company wishing to gain a mining lease, to start sucking minerals from our ore, was first required to own the land. The Regulations also provided for a 99-year lease to such companies. Via this process, some 142,000 acres were acquired by three main companies.

Three years later, the Bauxite and Alumina Industries (Encouragement) Act and its 1953 Regulations later, made it possible for the transnational bauxite companies to be declared "recognised producers" thus giving the minister of mining a basis for making further agreements, concessions on taxes and duties and special provision with the companies. These concessions were so generous that government seemed to develop halitosis based on how far backwards it bent.

In this present scenario, don't blame CHEC; they will take as much as government allows them to; they have no loyalty to us. Face it, the Chinese are not running a charitable organisation and they have millions of their countrymen to cater for. Despite the country being now a capitalist player, it is still a state-led economy. Thus, unlike the British and Americans when they were our earlier colonisers and neo-colonisers, Mr CHEC is thinking of the interests of the Chinese state. In spite of the massive size of its economy, with a gross domestic product (GDP) of US$9.33 trillion, it's average GDP is not much better than ours; US$9,800 to our US$9,000. Although its 2013 unemployment rate was 4.1 per cent, compared to our 16 per cent this represents more than 55 million Chinese without jobs. Moreover, with a poverty rate of 6.1 per cent, that is a whopping 83 million warm bodies.

The discussion regarding the suitability or quality of the highway is subject for another day. However, it is because we have wrecked ourselves why we have to CHEC ourselves, bow and take it on the chin.