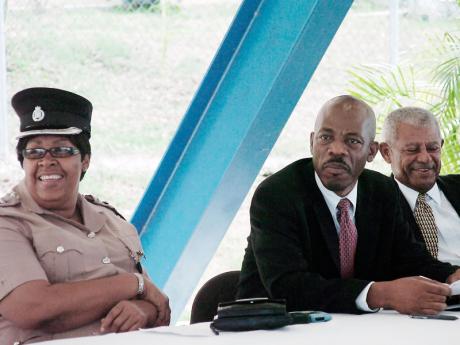 In this undated file photo, then Assistant Commissioner of Police Carl Williams is flanked by SSP Linette Williams-Martin and Dr Lee Bailey, president of the St James Police Civic Committee.-Photo by Christopher Thomas

Anyone remember the American boxer Carl 'The Truth' Williams? The same one who collided with a right hook from Mike Tyson in the second minute of the first round in 1989? I'm not sure why he was so called, but when the referee stopped the fight controversially after the count of eight, Williams was still coherent and demanded a rematch. It never came, and we felt cheated and were left to wonder how he would have fared had the fight continued.

Well, our new commissioner has the same name, and I would like to believe that he stands for the principles that earned his namesake the nickname. Williams, the 28th commissioner but most important, is only the 11th Jamaican and just the ninth to have risen from the ranks of the constabulary. Tomorrow, he walks into his office at Old Hope Road, dons his insignia on his shoulders and takes on the burden of serving, protecting and reassuring. Of course, the big question is, who will he seek to protect and whom will he serve?

If the script was followed, it was logical that he should have been selected. Williams holds a recently minted PhD in criminal justice, and thus he is not the stereotyped hands-on 'crime fighter' who makes you cringe when interviewed, as he slaughters the vice-chancellor's Nettlefordian English and occasionally earns the ire of the Independent Commission of Investigations. On the other hand, he is not an armchair academic who sits back and simply crunches data. True, he is not flamboyant or charismatic, but he makes sense when he speaks. However, both sets of Jamaicans who communicate in the two languages used here understand him.

Nevertheless, Williams is only one man, and unless his name is No Man, he is not an island. And he still has the same set of policemen and women who served under immediate-past commissioner Owen Ellington. He still has to contend with those elements who want to do what the old-time Jamaica Constabulary Force (JCF) was designed to do in the post-Morant Bay Rebellion period, when the natives were to be controlled, not protected. Also, some traits of the culture of the Suppression of Crime Act still prevail. In 2014, zero tolerance to corruption, violations of human rights and shoddy policing are priorities.

Nonetheless, this is 21st-century Jamaica, and the profile of the constabulary has changed faster than that of the typical parliamentarian. The House of Representatives still has persons whom one wonders if they are sensible. Lawyers, doctors and business people have always abounded in the House, but inarticulate yokels have consistently been elected since 1944 and the trend has not disappeared, though somewhat diminished.

People are still given ministerial portfolios and shadow responsibilities based on their allegiance to the leader and other subjective criteria. However, when the shortlist of the finalists in the commissioner derby was settled, the line-up looked like a Caymanas Park sweepstakes and the pace was hot.

Heat was generated among the chestnut colt, two bay colts, the filly and the two grey stallions, with a cumulative 15 university degrees Celsius, excluding other qualifications. An interesting subscript, which might be lost on the less-than-scrupulous onlooker, is that Deputy Commissioner James Golding, not a gelding, entered the race after climbing the various strata of the Island Special Constabulary Force (ISCF). Golding, not a front-runner though, was shortlisted. For a 'blue bag' to have been so elevated says not only volumes for his personal ambitions, but how much that underclass of the police force has transformed. This is a far cry from when 'corpie' was eligible to enter the force by being merely functionally literate, burly, and wearing size 10 shoes.

Few noticed, but while the JCF was sitting on its laurels and being comfortable in its achievements, the ISCF was quietly raising its recruiting standards, enforcing and encouraging personal growth. Ask anyone who has faced the blue-seam cops in recent years how smart they have become.

Indeed, to have a constabulary with so many qualified personnel at the helm is remarkable. Nonetheless, being brighter and more qualified on paper doesn't mean smarter or more honest. Notwithstanding the correlation between low educational attainment on the one hand and criminal behaviour on the other, it does not necessarily follow that the JCF, with more educated leaders, will be cleaner. Just look at the legal profession, with the myriad cases of criminal activity.

Degree does not guarantee competence

Similarly, having one or several degrees, while that might mean qualification on paper, does not guarantee competence. Despite holding a grey-haired doctorate myself, I am honest enough to know, and admit, that there are lots of 'PhDiots', including some who are irked that data do not support their theories or prejudices. Nonetheless, I have no reason to believe that Williams is one such.

While his academics should help in his job, what matters is how much policing he knows and how much he learned from others before him. Inasmuch as he might want to put his own stamp on the force, he must keep the good things that his predecessors did, while emerging from behind the shadows they created.

He takes the reins from Owen Ellington, one of the most complete commissioners in recent memory. Ellington had a commanding presence, like his forerunner Hardley Lewin, and was able to speak about any aspect of policing and national security at the drop of a hat. Yet, he disappeared under a cloud, which clearly did not engulf Williams.

As a nation, we cannot afford for Williams to fail. He must continue to squeeze out corruption, improve professionalism and collaborate with the other bright loyal police in doing his work. All patriotic Jamaicans must give him support and keep him, like his predecessors, politically neutral, sober and honest. After all, we want him to last beyond Round One.