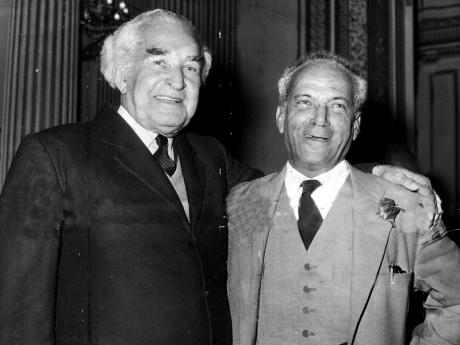 It is May 1938. The headlines on the front page of The Daily Gleaner of May 3 screamed, '4 dead! 9 in hospital!! 89 in jail!!! Police forced to shoot down rioters in Westmoreland. Dollar-a-day demand ends in death!'

Frome quieted down under the heavy hand of the police, but unrest broke out in other parts of the island, particularly in Kingston. On May 11, some 100 unemployed persons marched to Headquarters House and to the offices of the KSAC, demanding jobs on a works project running in Trench Pen.

Professor Colin Bryan, Jamaican historian based at the University of North Carolina, narrates the story in his new book, Freedom's Children - The 1938 Labour Rebellion and the Birth of Modern Jamaica. Palmer documents just how hard things were for the black masses of the country. The promise of work failed to materialise and on May 17, "hundreds of unemployed men in threatening and violent mood halted work at Trench Pen".

The labour unrest arrived at the Kingston wharves on May 19. Workers for the United Fruit Company, the world's largest banana company, walked off the job, demanding better working conditions and higher wages. They needed a leader.

Tomorrow, the nation celebrates National Heroes Day. Two national leaders who have been made national heroes emerged out of the labour unrests of 1938, and so did modern Jamaica.

Last Wednesday evening, the Sir Arthur Lewis Institute of Social and Economic Studies hosted a seminar, '1938 and Beyond: Exploring the Roots and Legacies of Modern Jamaica'. The 'exploration' was based on two new books. One book was Ewart Walters' We Come from Jamaica: The National Movement - 1937-1962, with which I had already tangled in the press over its reported treatment of Alexander Bustamante. The other book was Colin Palmer's Freedom's Children - The 1938 Labour Rebellion and the Birth of Modern Jamaica.

I was invited to speak on Palmer's history alongside Johns Hopkins-based Jamaican professor of history, Franklin Knight, and one of the country's walking history encyclopaedia, Arnold Bertram. Professor emeritus and eminent Garvey scholar, Rupert Lewis, chaired.

There is a frightening lack of knowledge of '38 and its significance. Living memory of pre-Independence Jamaica, and, most definitely, of the 'founding' is dying out.

There are not enough data-grounded discussions and public education events like the SALISES 1938 seminar. We cling to our partisan myths and pet prejudices. Both Walters' We Come from Jamaica and Palmer's Freedom's Children add to a growing body of work from inside and outside academia on our history and society.

Black being held back

On the Kingston waterfront, that fateful day in May 1938, the spontaneously striking worker realised that they needed leadership, somebody 'fi talk fi wi'. Lucius Watson and five other workers came to the conclusion, "Well, we don't have no leader, let us go call St William Grant. Grant was chosen for good reasons. He was a working-class black man like them, a staunch Garveyite who had been one of Garvey's lieutenants in Harlem but had been deported. Grant spoke on Sunday nights in the parks. And he was a race man."

Colin Palmer makes it abundantly clear that race, a reaction to black being held back, was a central part of the upheavals of 1938. Palmer tells us that the extensive documentation that he examined in archives and the Bustamante Museum, as well as the newspapers of the period, particularly The Daily Gleaner, "allowed me to make a more trenchant analysis of the labour rebellion and its aftermath and to underscore my argument that the events of 1938 were as much an assault on the barons of capital as they were a racial conflict".

The waterfront delegation to St William Grant's home found him merino clad, broom in hand, in his yard. "Mr Grant, is you wi come to. There is a strike down the waterfront and we want somebody to come and talk to us."

"All right, oonu wait on me, a coming. I'm just going to call on somebody."

Grant led the men to Alexander Bustamante's home on Beeston Street. And the rest, as they say, is history.

Bustamante had turned up at Frome and Trench Pen as "negotiator" and had been writing strings of letters to The Daily Gleaner about the condition of the country and its poor classes. The waterfront strikers were at first reluctant to accept Bustamante as leader. "We no wan' no white man yah!"

Black Grant, who had "a voice that rang like a bell", turned on the persuasive appeal and also threatened, "Listen to him! He have sense. If you don't listen to him, the meeting is over." When Busta was finished, the striking workers almost lifted him off the platform.

"The riots," historian P.M. Sherlock tells us in West Indian Nations: A New History, did not take place because the labouring folk wanted self-government, but because they wanted better living conditions and higher wages. Frustration and discontent spread through the masses of the people. The combination of mass poverty, growing race pride and middle-class impatience was explosive."

Norman Manley, turning down an invitation to run as a candidate for a KSAC seat in 1937, advised his friend O.T. Fairclough, "The problems of Jamaica, my dear Fairclough, are social and economic, not political." But when the trumpet sounded for political leadership, Manley answered.

"I am not a labour leader," Norman Manley told a large crowd gathered to hear him on May 26, 1938, in the midst of the labour upheavals, although he had volunteered to mediate in the labour-inspired rebellion on the wharves of Kingston following Bustamante's arrest as an "agitator" by the colonial authorities.

Manley had closed his presidential address at the launch of the PNP on September 18, 1938, with these ringing words: "... I believe we will have launched tonight a government which ... will make of this country a real place that our children and our children's children will be proud to say, 'We come from Jamaica,'" a phrase pulled into the title of Walters' book, which privileges Manley as leader of the national movement.

That movement of emergent national, political - and race - consciousness has, of course, several streams, going back to the Garveyism of the 1910s and '20s; the New York-based Jamaica Progressive League; Bedwardism; the Norman Manley-led Jamaica Welfare founded in 1937 with a Big Banana money grant; and the trade union movement in which Bustamante ruled.

Jamaica 2014 is not Jamaica 1938. Colin Palmer's Freedom's Children, in title and purpose, really begins in 1838 with the promise of better mus' come embedded in freedom from slavery. His las' lick in his preachy conclusion: "The descendants of Freedom's Children still await, for the most part, the fulfilment of the tantalising promise of 1938" is not beyond contest by unbelievers in the possibility of the perfect society. Palmer declares himself a believer in progressive politics.

Despite the fracturing of the national movement, which Walters bemoans, and the corruption of the politics, which emerged out of '38; despite the foibles and failures of leaders and people, which Palmer both candidly and extensively addressed, much has changed for the better. Look at me, as black as they come, writing for The Gleaner and Garfield Grandison serving as editor of that bastion of white and brown power in Jamaica in generations past!