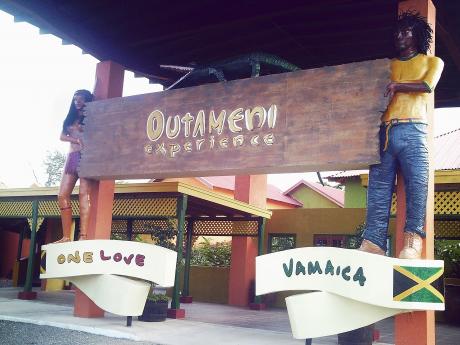 Contributed
FILE Tainos flank the Outameni Experience sign at the cultural and tourism venue in Coopers Pen, Trelawny. The $180-million purchase of Outameni by the Government has sparked outrage among business leaders, analysts, and the Opposition.

In our 'fi-mi' country, there are quite a lot of winners - some big, some small - but inevitably, most Jamaican are left out. They may be disgruntled and feel impotent because time after time they are the losers. Today, we will take a look at a few who win and who lose.

Take for instance Senator Frazier - Binns' plea for music sessions to go beyond the legal 2 a.m. limit. Oh, sure, she had copious reasons for seeking extension of the limit by a couple of hours because it would "empower the nocturnal economy". But what it would basically mean is that your local sound-system operator would be a winner (and a grateful supplier of votes). The losers? About 3000 people in his neighbourhood who won't get to sleep until dawn.

Then there was the West Indies cricket team who went on strike as they were about to take the field against India. Several of them already earn multi-millions every year but their selfishness has stuck West Indies cricket with a US$42 million bill. Each of these greedy winners should have to fork over his share of the debt until it is paid off. And never play cricket for the West Indies until such time. The real winners should be a new generation of youngsters waiting in the wings. The rest of us cricket lovers are the losers as India will never want to play us again.

Another profligate winner is state minister for science, technology, energy and mining, (does he actually have time to use the phone?) Julian Robinson, who splurged over a million dollars a month roaming with his phone (closely followed by - you can guess it - Phillip Paulwell at $900,000). As one political analyst put it "if the population is expected to endure austerity measures, then surely, their political representative can do the same. The losers? Us tax payers.

Speaking of government ministers Noel Arscott, minister of local government and community development, recently appealed to Jamaicans to pay over the $2.8 billion in outstanding property taxes. For a start, why aren't all those non-payers in gaol?

Forensic speculation, in the meantime, has drawn up a list of reasons why these taxes have not been paid.

4. Property tax is only for rich people.

5. I know someone in the tax office.

6. The tax notice must have got lost in the post.

7. They don't collect my garbage or fix the potholes.

9. I have never paid property tax before and I'm not going to start now.

These folks, no doubt, consider themselves winners, and the rest of us who pay our taxes are suckers.

The little man and the not-so-little man are also winners in our fi-mi land, thanks to our political system. One of the most frustrated men in academia must be Professor Donald Harris who has, for decades, tried to tell us what's wrong in our society so we can get it right.

In a 2012 publication, he pinpointed excessive construction costs including cost overruns due to the poor quality of construction work, cost of providing security on sites, kickbacks of various sorts from contractors to off-site agents, excessive post-construction costs of repair and maintenance due to neglect or even actual, use, and the cost of security 'protection'. Of course, successive governments could do something about these things, except it was they who condoned and authorised them. If only we losers had some of the wasted money to fund education, health, security, etc.

Let us not overlook the big winners in the private sector. A prime example is the banks. The deputy governor of the Bank of Jamaica says, on average, a saver can get 6% on the savings but to borrow (his own) money, he has to pay 17% interest. Abroad, the spread is 3% to 4%.

Everytime this embarrassing issue raises its head, the banking cartel trots out the usual excuses. But the winners here have to be the bank's shareholders (in Scotiabank's case, the majority of whom live abroad), and staff. Both banks make over a billion dollars annually. NCB's managing director reputedly earns nine figures and the other day the staff got a 16% increase. This at a time when so many are on a wage freeze, coping with the cost of living hovering around 9% per annum. The losers are, of course, the banks' savers and borrowers.

The mother of all instances of winners versus losers is the Outameni/ Out-of-Money controversy. While arguments can rage over the NHT's legal right to use its contributors' funds for undertakings other than building housing solutions for Jamaicans, the evidence shows that there are winners and losers involving vast sums of money. This is what it looks like (if not spectacular praedial larceny, then what?).

3. Mr. Lennie Little-White is prepared to negotiate terms for the purchase of a licence by NHT for the use of the intellectual property (est. $3 million)

4. Orange Valley Holdings (Mr. Little-White) is prepared to make it economically feasible to obtain the Outameni Experience audio-visuals for NHT to buy for an additional fee.

5. The Jamaica Development Bank's $80 million preference shares in Outameni are to be or have been written off.

1. Thousands of NHT contributors who would like to have a house.

The prime minister says what NHT contributors have to look forward to are further expenses: $111 million to reopen the Experience, the great house and the play area, plus the current cost of maintaining the property of over a million dollars a month, plus the cost of operating Outameni until it is expected to turn into a profit in three years. And more to come for sure.

For now, we have an all-PNP board and a defiant chairman who expect, the storm to soon blow over. Jamaica can expect Outameni to be, as Mr. Little-White would prefer to call it, blackwashed.

n Anthony Gambrill is a playwright and author. Email feedback to columns@gleanerjm.com.