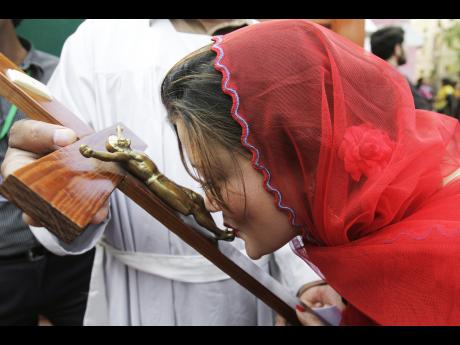 AP
A Christian kisses a representation of Christ during a Mass on Good Friday in Lahore, Pakistan. Christians around the world are marking Easter.

I am encouraged to engage Dr Patrick White in a debate on atheism because of his respectful, courteous and measured response to my recent piece on morality. We don't have to be rude and abrasive when we disagree, and Dr White's article in The Gleaner last Monday, 'Morality doesn't prove God exists', demonstrates that.

Of course, I know that Dr White's addressing me as "the Reverend Ian Boyne," rather than as a journalist, is intended as a put-down, but that is excusable! (I did get the point, Patrick!). But I was not using what is called The Moral Argument as proof of God's existence in my article. My thesis was that Darwinian atheists have no basis for asserting objective morality or moral realism, and that by doing so they were intellectual parasites.

Evolutionary theory and atheism have no ontological basis for positing objective morality. Moral subjectivism or constructivism is a necessary corollary of atheism. Another major point I made - and that was the thrust of that particular article - was that atheists have no basis for privileging human rights over animal rights and that atheists' espousal of notions of human dignity are absurd on atheistic philosophical grounds. In other words, if you don't believe in God or some supernatural reality outside of nature, you have no basis for protesting human-rights abuses or being against genocide and slavery, while remaining silent on the slaughter of millions of chickens, cows and sheep.

So rather than pointing to allegedly absurd and ridiculous moral codes in the Bible, as Dr White would contend, he should critically re-examine his own values and the philosophical basis for upholding them. So let's forget about The Moral Argument for God. Let's say God does not exist and the Bible merely represents the mindless mutterings of some ancient imbeciles.

But on what basis does atheistic Dr White go confidently about everyday life asserting belief in human rights and human dignity while eating animal flesh and wearing products made from it? Why aren't all atheists, including Dr White and my friends Clive Forrester and Hilaire Sobers, not outraged by the suffering inflicted on animals while being so worked up over slavery, homophobia, racism and sexism? I have just read atheist Michael Shermer's just-released (2015) 541-page magnum opus, The Moral Arc: How Science and Reason Lead Humanity Toward Truth, Justice and Freedom. It's a most impressive work, thoroughly researched and an intellectual gold mine. It is Shermer's best work.

But he fails to make a naturalistic case for ethics. At least he fails to ground that ethics objectively. I agree that as humans we can pragmatically develop a system of ethics in our own interest. But no compelling case can be made for a universalistic, trans-cultural, trans-contextual ethics. The atheist evolutionary psychology professor, Steve Stewart-Williams, makes that point convincingly in his book, Darwin, God and the Meaning of Life.

But let's deal specifically with this notion of human dignity, especially vis-‡-vis animal dignity. Now on what basis, Dr White, do you hold to human dignity over animal dignity? Why do you believe human life is superior to animal life? Stewart-Williams rightly observes: "The doctrine of human dignity has its historical roots in the anthropocentric, pre-Darwinian view of the universe ... . The image-of-God thesis is the idea that we and we alone were created in the image of God and have an immortal soul and that this is a fundamental difference between all humans and all other animals. That justified a fundamental difference in how we treat all humans vs all other animals."

As he says, "The rationality thesis is the idea that we and we alone possess rationality - the spark of reason - and that this is the difference that justified privileging our species above all others." But note this, Dr White: "Evolutionary theory undermines both these theses." So on what basis do you, as a scientific naturalist, still cling to these pre-Darwinian views of exclusive human dignity and human rights? Or do you accept that humans have no inherent rights over animals? Are you philosophically and scientifically consistent? We know scientifically that there are animals which possess high intelligence.

And how do you deal with humans who are mentally handicapped and intellectually challenged? Do you still treat them above intelligent mammals?

Stewart-Williams has more to say, Dr White. "By undermining both the rationality thesis and the image-of-God thesis, the Darwinian world view undermines the doctrine of human dignity. It leaves it without intellectual foundations ... . The idea that human reason is the supreme adaptation is an equally human-biased or anthropocentric view of the world." It's the same as white people and males asserting superiority over blacks and women, Dr White. You are living off the intellectual heritage of Judaeo-Christian religion and you have smuggled in alien notions into your scientific, atheistic world view. You can't eat your philosophical cake and have it, Dr White!

I love Stewart-Williams' honesty and I am forced to quote him again: "Thus even though we in the West live in a semi-post-Christian world, the ethical attitudes they inspired linger on." That is the intellectual parasitism I am accusing you and other atheists of, Dr White. Face up to it like Stewart Williams and like philosopher Michael Ruse, who stated: "Morality is the collective illusion of the genes. We need to believe in morality and so, thanks to our biology, we do believe in morality. There's foundation 'out there' beyond human nature."

Why doesn't Dr White get worked up about animal suffering and animal slaughter? Why is he not at the forefront of the animal-rights movement like fellow atheist Peter Singer? Doesn't his scientific Darwinian naturalistic position compel him to do so, for consistency? Peter Singer says in Unsanctifying Human Life: Essays on Ethics: "All the arguments to prove man's superiority cannot shatter this hard fact: In suffering, the animals are all our equals."

What makes us different

Dr White is worked up about all the suffering, pain and evil that Christianity has caused and which the Bible sanctions. He and Richard Dawkins are repulsed by the genocidal Christian God. But why? Why the selective moral outrage? Even Hitler sought to justify his barbarism by rooting it in nature. Hear him: "If we did not respect the law of nature, imposing our will by the right of the stronger, a day would come when wild animals would again devour us ... . The law of selection justified this incessant struggle by slowing the survival of the fittest."

Virginia Morell puts its well in her book, Animal Wise: "The question 'What makes us different?' is the wrong question. Instead, given that we now know that we live in a world of sentient beings, not one of stimulus-response machines, we need to ask how we should treat these other emotional, thinking creatures."

Dr White, you need to elevate animal rights on the very same level as gay rights, women's rights and the rights of black people. Why this bias for gays and other oppressed persons and not for oppressed animals? Offended that I am putting gays in the same category as animals? Why not, given scientific naturalism? Michael Shermer, one of the most passionate and prominent New Atheists and founding publisher of the well-known Skeptic magazine, struggles painfully over this animal-rights issue in the chapter 'A Moral Science of Animal Rights' in his tome, The Moral Arc.

"Critics (of animal rights) counter that our superior intelligence, self-awareness and moral sense add up to make us wholly other from all other animals and this justifies our exploitation of them. But Singer points out that by these criteria human being in states of infancy, severe mental retardation, grave physical handicap or coma would imply that we exploit them. Since we would not consider wearing or eating such humans, so we should not do the same to animals whose capacities are in such categories." He quotes film-maker Mark Devries, who did Speciesism: The Movie, as saying: "The presumption that non-human animals' interests are less important than human interests could be merely a

prejudice - similar in kind to prejudices against groups of humans such as racism." Indeed, on naturalistic grounds, it most definitely is! Only religious people can privilege human brings and invest them with a dignity above animals, which would make it ethical to use them for scientific research to advance human interests and for our palate.

Forget about all the "moral absurdities in the Bible" just for a moment, Dr White, and contemplate your own crumbling house of scientific naturalism. Or accept its logical conclusion and start lobbying for animals as you have been for gays.