Jamaica still in love with Obama 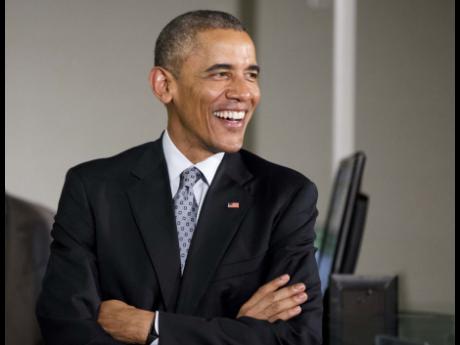 AP
President Barack Obama tours Indatus, a Louisville-based technology company that specializes in cloud-based products and services, in Kentucky last Thursday. Jamaica is preparing to welcome him for his first official visit to the island later this week.

It can't be that he got a mouthful of Lewinski. It can't be that he snorted coke. It cannot possibly be that he sent thousands of troops to die in search of weapons of mass distraction. It cannot be that he smiled in the faces of Caribbean banana-producing countries, yet pushed the World Trade Organization (WTO) to squeeze them out of their three per cent market share, because of campaign obligations to Chiquita and other American capitalists.

Never mind his name, Barack Hussein Obama was born in the United States, and cradled in Hawaii. He's as American as pineapple pie. Moreover, his mother is not only American, but white. So it doesn't even matter if his daddy is human, she can't question his maternity. For all the dirt they try to dig up on him, the only dark stuff they find is his pigment. Yes, extremist and racist Americans might hate him because he is black, but most Jamaicans love him for the same reason.

What is ironic is that apart from Obamacare, there is very little that he has done for 'coloured folk'. This universal health-care regime caused millions of previously uncovered American citizens and residents to be able to access the most basic provisions of medical attention.

Obama inherited an American economy that was led into recession under two administrations of George W. Bush, with Congress dominated by the Republican Party, and unemployment was almost eight per cent. In 2014, it fell to just over five per cent, and large numbers of 'white folk' got jobs. This is the no-nonsense president who used the available intelligence and sent troops into Pakistan and found and eliminated public enemy No. 1, Osama bin Laden. This bin Laden was the main pretext for the War on Terror and billions of American taxpayers dollars were spent trying to locate.

True, this president is a warrior king, like his predecessor, Bush, but he put his foot down hard on Israel, whose continuous human-rights violations and disregard for the position of Palestinians were making it very difficult to broker a peace deal. Obama has managed only the unimaginable. After decades of threats, hostilities and defiance, Iran has finally agreed to a discontinuation of its nuclear proliferation. And far from being hegemonic and one-sided, it shows a respect for the sovereignty and dignity of the Iranian people and state.

But Obama epitomises the view that a black man cannot do anything right. Speaking on radio last Wednesday, firebrand African-American economist and journalist, Julianne Malveaux, remarked that her mother, when told of Obama's initial presidential victory, sighed, "I hope they don't kill him!" Though apparently unrelated to the anticipated arrival of Obama to Jamaica next Wednesday, a white American, reportedly frustrated with the cost of renewing his travel documents, threw them over the perimeter wall of the US Embassy in Liguanea last week.

With swiftness almost akin to American police arresting black people, our Jamaican cops quickly held on to the perpetrator and arrested him, with such efficiency and respect for his human rights, that the pushers of the Leahy Law would give them three thumbs up. Then in the blink of an eye, they checked the contents of his rucksack and found nothing harmful. Just like when Bush sent soldiers into Iraq, but this time they had probable cause.

Cynics and sceptics believe that this isolated and coincidentally timed incident might be a test of the capability of the Jamaican security forces in protecting the most important citizen of the world. And the Embassy officials say that so far, and with all the security arrangements in place, the highly melanised Jamaican security detail passed with flying 'colours'. Not taking any chances, however, the Jamaican military has called out its reserve units and the police are in full readiness.

Obama might be in a country of black Third-World residents, but we have an enviable peaceful history between Jews and Muslims. This is the only place that radical Muslim Louis Farrakhan could have worshipped in a synagogue, and where both religious-ethnic groups intermarry regularly.

Moreover, the Secret Service seems to not understand where the threats come from regarding the president's safety and security. For example, in true American cop style, they showed extreme vigilance in 2013 when Miriam Carey, an African-American woman, suffering from post-partum depression, and although possessing no other weapon than her motor vehicle, rammed her car into a White House gate while her infant was in the vehicle. Having been cornered after a bizarre chase, she was swiftly shot to death.

However, these Secret Service agents have been more lax with Obama's security than with any other president in modern memory. In 2009, Caucasian couple, Tareq and Michaele Salahi, crashed the president's state dinner, and the Secret Service didn't even bother to check if they were guests. Two years later, a man with an assault rifle parked his car and fired several rounds into the White House. For some strange reason, the supervisor mistook the gunshots for engine backfiring and told his men to ignore it.

In March 2014, leading up the election, three 'last-line-of-defence' agents were drunk, one unconscious, while in the Netherlands with the president. Then on September 16, 2014, an improperly screened security contractor, with a criminal record and loaded gun, was in the same elevator with the president in the Bible South town of Atlanta.

And three days later, after the alarms were disabled because of being too noisy, a veteran from the Iraq war scaled the fence and made it into the hallway of the White House while armed with a knife. Interestingly, the perpetrators were non-white.

So, guess what? The bar has been set very low by the president's men themselves and we can do better. After all, it is not the first time that Jamaicans have sworn to put their lives on the line for the president.

- Dr Orville Taylor, senior lecturer in sociology at the UWI and a radio talk-show host, is the 2013-14 winner of the Morris Cargill Award for Opinion Journalism. His just-published book, 'Broken Promises, Hearts and Pockets', is now available at the UWI Bookshop. Email feedback to columns@gleanerjm.com and