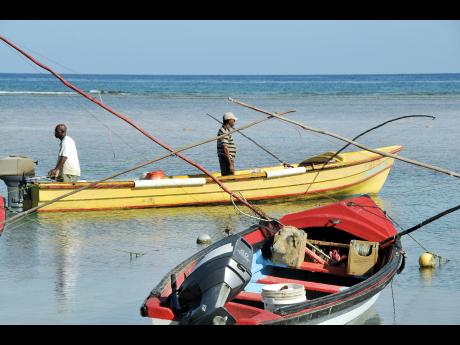 File
Fishermen in Whitehouse, Westmoreland, returning to shore with not much of a catch after spending the morning at sea.

The recent news that drones are being considered for use in monitoring Jamaica's marine space is a welcome one. I have long been an advocate of the use of additional forms of technology to assist with managing Jamaica's vast exclusive economic zone (EEZ) both for its resources and security purposes.

If one examines the details of this proposal, it appears that there are two main components. The first component is the use of drones to support the enforcement of illegal, unreported and unregulated (IUU) fishing in Jamaica's waters.

Other large industrial fishing vessels under various flags of convenience may also be operating without permission in our waters. In addition to fishery management, other benefits include the use of the drones to combat illegal drugs and gun trafficking, as well as assistance with search and rescue operations.

However, given Jamaica's harsh economic realities, the Coastguard is heavily under-resourced and not fully equipped to deal with such a wide area of maritime concern. Drone surveillance is, therefore, a step in the right direction.

A second and equally important component of the recent announcement is the use of the drones to increase fishery production. As the article stated, "Surveillance by the drones would aid Jamaica to maximise the true potential of its fisheries industry." This suggests that drones will possibly be used to map new areas for exploitation of existing fisheries (fin fish, lobster, conch, sea cucumber). They could also be used to target new or underexploited fisheries, for example, pelagic species such as tuna, mackerel, swordfish, mahi mahi and squid, to name a few.

My concern lies primarily with this second component, the so-called 'maximisation' of the fisheries. On the surface, these goals seem laudable, and the use of drones and other remote sensing technology (satellite imagery, etc) should be encouraged. Jamaica's fisheries are indeed one of the most heavily overfished in the world.

Over the years, I have participated in several international scientific conferences, and the state of Jamaica's coral reefs is often used as an example of the worst-case scenario in various presentations. The poor state of our reefs has been shown to be directly linked to a long history of overfishing key fish species such as parrot fish that help maintain a healthy balance between living coral and plants (algae/sea moss).

One recommendation has been that Jamaica reduce the fishing pressure on its nearshore coral reef-associated species (parrot, snapper, grunt) and instead exploit the pelagic species I mentioned earlier. Making this shift is challenging, however, because these fish species are found further out at sea and require larger boats with more expensive equipment to harvest them.

However, the main red flag with the proposal as presented by the Ministry of Agriculture and Fisheries is the fact that the purchase and operation of the drones are being significantly funded by a private fishing company. While this private entity may have good intentions, there is the likelihood of a conflict of interest.

In economic terms, this means there is the potential for a situation of information asymmetry. This is where one economic actor has more (or better) information than other competitors and firms (including the consumer) in the particular industry. This imbalance of power can lead to market failures, and in this case, result in overexploitation or excessive capture of the 'economic rent' of the natural resource (fisheries). In short, one economic actor ends up having an unfair advantage over competitors.

The fact that a private seafood distributor has poured significant capital input into this effort means questions must be asked. Will this private entity have proprietary rights to the information about the location of these new fishery resources? Will it have sole or first rights to exploitation? Will the data collected be incorporated into a comprehensive fisheries management plan?

Will the information be used by the ministry's Fisheries Division to set quotas based on the biology of these species? Will a fair share of the revenues from the export of these additional fisheries resources accrue to the people of Jamaica (via taxes, licence and fees)? How will the national security-related information be segregated from fishing-related information?

In my opinion, it would be better policy if the results of this pilot effort were to be used instead to design a system where the government, through the relevant ministries (National Security and Agriculture), was in full control of the operation and information produced by these drones. The Government should, instead, seek to find sustainable financing mechanisms, including taxes, fishing licences, as well as international aid to support monitoring efforts. Using this approach should minimise the potential for such conflicts of interest as described earlier.

Rules for fair allocation of resources, including the provision of biological information about the state of Jamaica's maritime resources, should be set by a regulatory body. These regulations should, of course, benefit from the input of key stakeholders such as fishing interests, academia and others.

On the one hand, I applaud the Government's cooperation with a private-sector partner for seeking innovative ways to improve marine resource management. However, on the other, I would advise them to tread carefully with this type of partnership. Remember the phrase 'he who pays the piper plays the tune'?

Jamaica's fishery sector has had a long history of overexploitation not only by the 'small man', but by a few well-connected and influential players reaping most of the benefits. This needs to change. Public-private partnerships are important, but transparency and fairness are necessary components for a sustainable fisheries sector and shared benefits for all Jamaicans.

- Peter E.T. Edwards, PhD, is a Jamaican marine scientist, environmental economist and policy analyst. He currently works as a consultant for a federal ocean and coastal management agency in the USA. Email feedback to columns@gleanerjm.com and peteretedwards@gmail.com, or tweet @peterericthor.