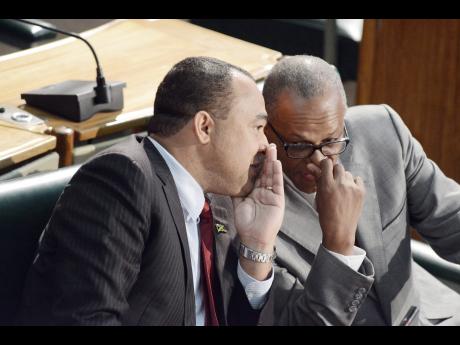 Norman Grindley
Christopher Tufton (left) whispers to Arthur Williams in their return to the Senate in February after a ruling from the Constitutional Court. The pair had to wait for an appeal ruling in March to validate their reinstatement to the Upper House.

"1 ... the request for and procurement of pre-signed and undated letters of resignation and letters of authorisation by the leader of the Opposition from persons to be appointed or appointed as senators to the Senate of Jamaica, upon his nomination, is inconsistent with the Constitution, contrary to public policy, unlawful, and is, accordingly, null and void."

In its reasons for judgment, one Supreme Court judge, Daye J, opined that the high ideals, principles and values intended for the Senate by the Constitution's framers were:

"(a) A measure of security of tenure.

(b) Independence of deliberation (i.e., freedom to debate).

(c) Separation of powers in the legislature.

(d) Check and balance of power within the legislature."

These concepts, doubted by some analysts in the cheap seats (including yours truly), were emphatically confirmed as sound law by the appeal court [Holness v Williams SCCA 22 of 2015 (judgment delivered March 25, 2015)] save only for the use of the word "unlawful". The opinion of the vaunted Privy Council (the retention of which has been the JLP's perennial cause celebre) hasn't been sought, so we must accept and enforce the appeal court's decision.

Already, despite the judges' assurance that what was being addressed was "the validity of the letters" and not "the status of a member" (Panton P; paragraph 32), the status of senators Reid and Clarke (summarily banished from the Senate without being heard in court) AND former senators Williams and Tufton (who wasn't a party to any litigation although always at liberty to join in) have been affected by the appeal court's decision. I'd expect the principles espoused by a judgment of such chilling effect to sink in throughout Jamaica and certainly within the Houses of Parliament.

Even before the appeal court decided, the attorney general, in an unusual move, delivered a public opinion, unsolicited by any party to the litigation. He opined that the Supreme Court decision effectively restored Messrs Williams (the beneficiary of the judgment) and Tufton (who was not) to their Senate seats.

So, as at March 25 when the appeal court delivered its judgment, it appeared all were singing from the same hymn sheet. The Senate was declared and understood to be an august, independent body entitled as of constitutional right, inter alia, to independence of deliberation and separation of powers from the Lower House. Any action, even by agreement, that sought to restrict any of these "high ideals, principles and values", construed by two courts as the intention of the Constitution's framers, would be "inconsistent with the Constitution, contrary to public policy, and, accordingly, null and void".

Alrighty then. All together now: Leave the Senate alone to independently debate and vote! Right?

Less than two months after the appeal court's judgment, it's reported that the leader of government business in the Lower House surreptitiously sent an anticipated contract to the Opposition suggesting the contractual terms should dictate the Senate vote on the current CCJ bills. Apparently, the document sought the JLP's consent to having one-half of its eight senators vote for the CCJ bills. The quid pro quo expressed in the contract, whose existence was shrouded in secrecy until the story was broken by one intrepid newsman, was that the CCJ wouldn't be implemented until after a subsequent referendum, provided no political campaigning attended that process.

Where do I begin? First, the contempt for Jamaican taxpayers and the cruel abuse of the Jamaican electorate disclosed by these shenanigans are staggering. Why taxpayers would be asked to pay for an unnecessary referendum AFTER the bills are duly passed in BOTH Houses of Parliament beats all cockfight. Can the PNP identify a reason for this proposed profligacy with other people's money that's consistent with the national interest? Or is it political expediency through and through? Was Jamaica's current fiscal strangulation by an IMF programme that denied teachers more than three per cent increase after a six-year wage freeze just a dream?

Obviously, the PNP considers Jamaican voters 'muggies' who'll swallow anything. Are we to turn up to polls, at great inconvenience; dip our fingers in ink; vote for or against the Caribbean Court of Justice; AND believe our votes mean anything? Really? Seriously? NOW DO YOU SEE THE REAL VALUE OF VOTING IN JAMAICA? Now do you see what political parties think of your vote? Now do you see that so long as this oppressive, anti-democratic Westminster style of governance is in vogue, the only vote that counts is a vote by roadblock, placard, plane ticket; or boycott?

But, there's more. This unworthy attempt to 'fix' a Senate vote is in express breach of the legal principles expounded by two Jamaican courts in Williams v Holness. If political parties can secretly agree a Senate vote in advance, that's a dagger to the heart of independence of deliberation AND freedom of debate. Since this perverse proposal came from MPs in the Lower House, through the leader of government business, this means PNP MPs have no regard for the appeal court's declaration that there must be:

"(c) Separation of powers in the legislature;

(d) Check and balance of power within the legislature"

and any support for, or glee at, Andrew Holness' resulting embarrassment is exposed as hypocritical political gamesmanship. Clearly, PNP MPs consider themselves above the law.

Based on the legal language used, it seems the proposed agreement was drafted by a lawyer. WHO DRAFTED IT? Was it someone from the attorney general's chambers? Was the AG consulted on the constitutionality of such a furtive manipulation of democracy? When asked about the document by said intrepid newsman, the AG refused to answer.

I wonder why the proposed agreement asked for four JLP Senate votes when only one was needed. This fits perfectly in Arsenio Hall's comic category, "Things that make you go hmmmmm ... ." I've no idea why this peculiar request was made, but I know that if I were writing a novel of political intrigue,

my plot would be built on an imaginary government working assiduously to insert a mole in opposition senators' ranks. The mole's task would be, when activated, to provide the swing vote for planned upcoming Constitution-altering legislation. But, in order to protect the mole's identity, my fictional government would first try to get the Opposition to agree to direct several senators to vote with government. In fact, my fantasy government would be positively Machiavellian by ensuring the mole wasn't among those chosen to vote with government.

What a preckeh! It seems that what's good for the goose is most definitely not good for the gander. Andrew Holness was hanged, drawn, quartered, tarred, feathered AND run out of town on a rail for accepting Arthur Williams' advice that pre-signed letters of resignation drafted by Williams were legal. Two courts, consisting of six judges, allowed Williams to reveal confidential attorney-client information in order to bring a lawsuit against his own client for accepting his legal advice.

But, when the PNP takes steps to produce an identical result, namely, destroying senatorial "independence", and goes further to deliberately organise MPs' attempted interference with senators in flagrant breach of the "ideal" of separation of powers between legislatures, nobody, save for said intrepid newsman, takes anyone to task. After a couple of news cycles, it fades away.

Nobody condemns the disgusting leadership example displayed or the danger to democracy inherent in such clandestine attempts to pre-decide a Senate vote. Instead, media are all over an internal constituency squabble and anxious to broadcast wild, salacious, unsubstantiated allegations about political activists that ought properly to be the subject of police reports.

You see, in Jamaica, professionalism in media is a rarity, which means puss and dawg don't have the same luck. And the differences between PNP and JLP include:

1. PNP internal party squabbles only become public when the party permits; and

2. When the PNP has a national political agenda, nobody breaks ranks openly. For certain, the legal mind who crafted (oops, sorry, 'drafted') the secret agreement is unlikely to sue any PNP functionary for attempting to subvert the Constitution.

This is PNP country. We must do as they say, NOT as they do.