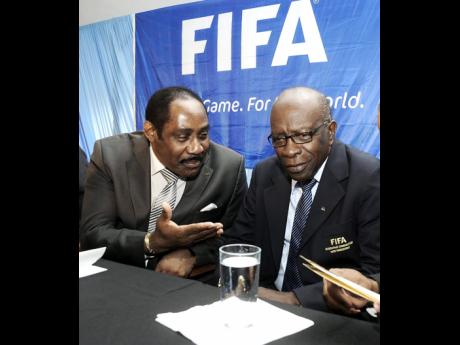 Rudolph Brown
Head of the Jamaica Football Federation, Captain Horace Burrell (left), and former FIFA Vice-president Jack Warner in 2010. A corruption saga led to Warner being separated from the vice-presidency and Burrell being suspended.

"FIFA fo fum! I smell the blood of a Trini Man." It is another epic fairy tale but it is literally going to be a Grimm brothers' story that doesn't look like it is going to have a happy ending. Like a long African river, our beloved football icon of CONCACAF, Austin 'Jack' Warner, has lived in denial about his involvement in any shady deal regarding football.

A few years ago, when anchor of football Jamaica, Captain Horace Burrell, dodged the bullet and escaped with a slap on the wrist over improper payments, Warner brushed off all aspersions. Warner was defiant, and, although no spring chicken himself, even found time to throw a jab at former prime minister and president of the Premier League Clubs Association, Edward Seaga. His dinosaur reference, though uncharitable, was all the stranger because I have known of Warner since I was in university, and he was no boy even then.

Warner seemed to have developed a reputation for untouchability, and a few labelled him the 'Teflon Don'.

Reality is now hitting him in his face like a shot from Messi or Kaka, but he has to finally face the referee and possibly give up a penalty before the fans. On Wednesday, reports surfaced that Swiss police had arrested a number of FIFA officials. Looking rather surreptitious, all were in that country and apparently at the most convenient time for their arrest and charge.

As the newsrooms reeled under the information, the offices of CONCACAF in South Florida were being raided. American representatives to CONCACAF were carted away and rumours surfaced about the arrest of Warner, after his successor was named among those nabbed in Switzerland. Of course, being in Trinidad at the time, Warner rebuffed the report and said that he had walked away from football more than four years earlier and was dedicating himself fully to his political career and service to the people of his country.

Yet within hours, the don was flatfooted by revelations that his own two sons had already squealed like two pigs in a poke and delivered sealed confessions to the American authorities from as far back as 2013. If ignorance is bliss, the incredulity of Warner as he stuttered in surprise must have debunked this old adage.

Before he regained his fluency, proceedings were long begun in pursuance of an extradition request from the American government. Doubtless he was totally innocent until proven guilty, but his claim of being oblivious rings like an "I can't recall" a few years ago, when another West Indies party, sharing similar lettering, as his Independent Liberal Party (ILP), was faced with the extradition of another don.

Hours later, Warner had posted bail, as the Kamla Persad-Bissessar government seemed not to have any intention of delaying or seeking the assistance of any American law firm to thwart proceedings. Truly, man hath a short time before he faces final judgement.

Now, we know that Warner did have associates in Jamaica and those of us who like local pastry are keeping our fingers crossed that nothing untoward is going to arise from the dough we have here. Our nationalism is not simply capped in half-baked accusations and kickbacks.

Nonetheless, a question that arose in the debacle which ended with the extradition of Christopher 'Dudus' Coke, a few years ago, was, "How come America can charge and get extradition for a person who has not committed a crime on American soil?" The explanation is simple: The US Congress has passed laws that allow it to have jurisdiction outside of its borders, as long as it can be remotely shown that what it defines as a crime (whether or not defined as a crime elsewhere) has had some impact on that society.

Thus, Coke had been accused of shipping drugs into the United States, a crime to which he confessed. With the increase in the global movement of capital, the US has enacted more legislation to protect its financial borders, and where there is any portion of what it deems as ill-gotten gains, passing through its financial system. Hence, where kickbacks and other inducements for corruption are channelled through American banks, it triggers all of the powers under the legislation and Uncle Sam can send for whomever it considers to be perpetrators.

This is the sobering lesson for us all on this little piece of rock. It might be strange that the United States, which narcissistically plays its World Series of baseball among a number of teams from within its borders, and has its World Champions of basketball and its own version of football, has an interest in a global sport. Indeed, soccer is a growing sport in the USA but it is still a relatively minor sport there.

One can only speculate why the investigation, which reportedly began years ago, has triggered arrests on the eve of the FIFA election in which Sepp Blatter is seeking another term as president - to hold on to the reins of the largest global sport body in the world. It is also well or poorly timed, depending on one's perspective, that it is leading up to the election period in Trinidad and Tobago.

Has anyone here thought that the Jamaican election is due in just over 18 months? So, in all of this furore as we focus on Warner, Blatter and others in this FIFAgate, I am wondering if any money, such as payments for the award of contracts to international bidders, clandestine campaign contributions, or any other improper monies, might have at any point found its way to or passed through the American banking system. Wouldn't it be interesting if any of the FINSAC money from the mid-1990s got mixed up with the red, white and blue?

Let the chips fall and see who is able to successfully jump over the candlestick.