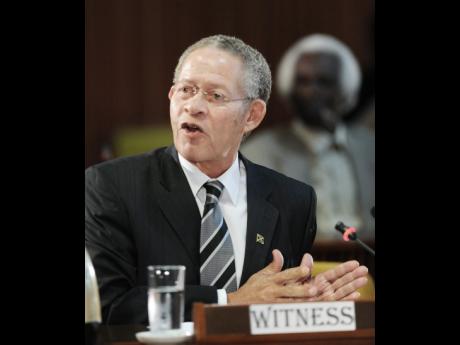 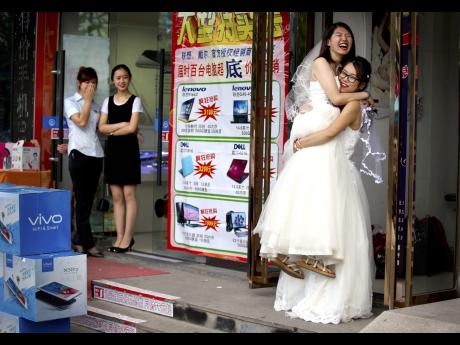 AP
Li Tingting laughs as she is lifted off the ground by her wife, Teresa Xu, outside of a beauty salon where the two were preparing for their wedding as clerks from an adjacent shop look on in Beijing, China, on July 2. The prominent Chinese lesbian couple held a simple ceremony to announce their informal marriage in their latest effort to push for legalisation of same-sex unions in China.
1
2

Your Sunday columnist, Ian Boyne, has, quite usefully, highlighted the constitutional enigma that the US Supreme Court has created in its decision on same-sex marriages. Its ramifications go far beyond that specific issue. Not only has it shaken up one of the most enduring of social institutions, it also challenges the basic tenets of American democracy.

The US constitution, to a much greater extent than ours, is rooted in the principle of separation of powers among the three branches of government - legislature, executive and judiciary. Simply put, it is the duty of the legislature to enact laws, that of the executive to administer them, and of the judiciary to interpret them based on the constitution when disputes arise.

US Chief Justice John Roberts, writing on behalf of himself and the other three dissenting judges, accused the other five members of the court of subverting that fundamental principle. The revisionist judges of the US Supreme Court made no effort to disguise their imperious attitude towards the constitution that they are required to interpret, not to rewrite. Says Justice Kennedy, writing for the majority: "The generations that wrote and ratified the Bill of Rights and the Fourteenth Amendment did not presume to know the extent of freedom in all of its dimensions ... ."

As Chief Justice Roberts stated so profoundly, the issue before the court was not whether same-sex couples should be allowed to be married but, rather, whether judges with life tenure who are not elected and are unaccountable to anyone have the authority to make decisions that only the people, directly or through their elected representatives, can legitimately make.

The court, Roberts said, had abandoned the traditional virtues of modesty, caution and restraint and embarked on "judicial policymaking". Judges, he said, must declare what the constitution says, not what, in their view, it ought to mean and must not declare laws to be unconstitutional simply because they find them to be "unwise, improvident or out of harmony with a particular school of thought".

I have read carefully both the majority and dissenting opinions emanating from this case and I reflected on our own experiences and the way in which our judges at the highest level have understood and executed their role.

I don't recall any instance in which our Supreme Court has sought to exceed its judicial mandate and usurp the power of the Parliament. Some may argue that this is because our judges, in the true British tradition, tend to be conservative, demonstrating the humility and restraint that Chief Justice Roberts bemoans has fled the US Supreme Court.

Wherever its roots may lie, the fact is that our judges have been scrupulously respectful of the separation of powers, and while from time to time they have suggested legislative action that Parliament should take, they have refrained from substituting what they think is desirable for what the law says.

Jamaican judges have clearly shown an appreciation for the uniquely important role of Parliament in a democracy that even some of our own parliamentarians may not fully grasp and which some of the US Supreme Court judges are prepared to eschew.

The dilemma in the US Supreme Court arises out of the nature of the constitution itself. The US constitution is rightfully hailed as one of the great framework documents for democracy and government. Remarkably, it is the shortest of all the constitutions of the world, consisting of only seven articles and, together with all 27 amendments, contains fewer than 7,600 words.

As a comparison, the constitution of India, the world's oldest democracy, is more than 117,000 words. Because of the brevity of the US constitution, many issues, including fundamental rights, are stated in broad, general terms, leaving wide room for the Supreme Court to roam in its interpretations. Jamaica's constitution, with more than 40,000 words, is much more detailed, hence our court is more confined in its interpretations.

The US Supreme Court has lurched on to a dangerous pathway. Chief Justice Roberts cited Justice Benjamin Curtis, who was a member of the Supreme Court in the late 19th century. He was one of two dissenters in 1857 when the Supreme Court declared that descendants of slaves, although born in America, were not citizens of the United States, a decision still regarded as one of the two worst rulings to have ever emanated from the court, the other being one in 1883 that upheld laws prohibiting interracial marriage.

Curtis' dissent is insightful. Accusing the seven judges who voted in the majority of engrafting on to the constitution a substantive exception not found in it, he declared:

Those two historical decisions may now have to share their dubious pride of place with this latest Supreme Court caper. It has flung wide open the gate to the barn and it is not going to be possible to tell any horse that it is not entitled to bolt. Justice Kennedy, for the majority, wrote that "the right to marry is fundamental because it supports a two-person union unlike any other", which led Chief Justice Roberts to pose the very pertinent question: If the due-process and equal-protection provisions make it unconstitutional for marriage to be restricted to two persons of opposite sex, what constitutional basis can there possibly be to restrict marriage to a union of only two persons? The majority judges, he says, provide "no reason at all why the two-person element of the core definition of marriage may be preserved while the man-woman element may not".

The worst is yet to come. The US Supreme Court, by its queer interpretation of the due-process and equal-protection clauses, has now made it impossible to deny anyone the right to marry anyone - his mother, sister, daughter or even his own brother, and it won't be long before the court faces the embarrassment of affirming that right.

Those who would dismiss this as far-fetched and absurd are perhaps unaware that the New York Appeals Court recently ruled that a marriage that took place between a man and his niece was legal although it was in violation of a state law prohibiting consanguineous marriages.

The US Supreme Court, on several occasions, has reversed previous decisions that a subsequent panel found to have been wrong. It is difficult to see how this decision could ever be reversed, even if a subsequent panel were to be inclined to do so. Some genies just can't be put back in the bottle.

We must not underestimate the implications all this has for Jamaica. Same-sex marriage has been legal in Canada since 2005; it became legal in England last year. The USA has now joined up and the first vice-president of the European Commission recently called on all European Union member countries, 13 of which have already done so, to do likewise. These, essentially, constitute what we in Jamaica refer to as our all-important international partners.

While I was in office there were subtle attempts by some of these partners to get Jamaica to move along the gay-rights trajectory. I am told that those efforts are no longer subtle and are not going to be satisfied by just the repeal of the buggery law.

President Obama's pointed remarks while in Jamaica and the subsequent visit of US LGBT Special Envoy Randy Berry and USAID LGBT coordinator, Todd Larsen, should not be seen as incidental. The views of the Jamaican people, no matter how overwhelming, will have no more weight than those of the Greeks who voted against austerity demands. The issue of gay rights is no longer just a cause célèbre; it has been elevated to a 'human-rights' issue whose universality must transcend public opinion and legislative or electoral decisions.

More than a week ago, the Anglican Church in the USA, despite the pleading of the Archbishop of Canterbury not to do so, voted in support of same-sex marriage. The New World Order may finally have arrived.