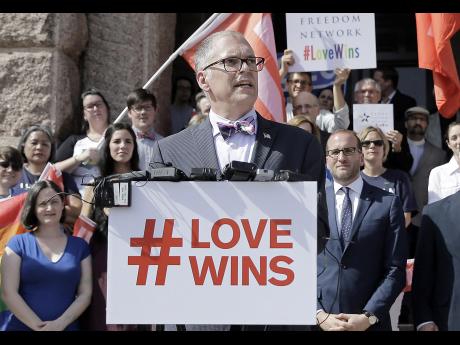 AP
Jim Obergefell, the named plaintiff in the Obergefell v Hodges Supreme Court case that legalised same-sex marriage nationwide, is backed by supporters of the court's ruling on same-sex marriage on the steps of the Texas Capitol during a rally in Austin, Texas, on June 29.

So Christians are losing the culture and legal war over gay marriage. Now the fighting shifts to the arena of civil liberties, including religious liberty, and the issue of respect for pluralism, tolerance and epistemic humility.

As a religious conservative on gay marriage, I don't mind being in the minority. I can adjust to a society that has normalised gay marriage, as I see Christians as exiles in a pluralistic society. I am not a theonomist. I don't believe Christians have any divine right to impose their view of morality on a secular society. This is not a theocracy and Christians should have no privileged position. They have no right to dictate laws.

They have a right to contend in the marketplace of ideas for their views to be accepted, and they certainly have a right to influence policy and laws. But if they lose that contest, they can't assert some supervening theocratic right.

I recognise the inalienable right of gay people to disagree with me with every vehemence on this matter of homosexuality or gay marriage. But the beauty of living in a democratic, pluralistic society is that we get to live side by side with people who disagree with us passionately and stridently without having to kill one another. We have to learn to live respectfully with people with different world views. And the very nature of tolerance suggests that I really do reject your views, your notions of morality and your lifestyle (a bad word for gays).

I have no problem with a gay person's seeing me as an absolute fool, a non-bright, to use Richard Dawkins' favourite put-down, just because I believe in a book written by 'people of a nomadic tribe'. I know you mock me for talking to my 'imaginary friend in the sky', and I know you believe that if I really were enlightened or psychologically healthy, not needing a crutch, I would not need religion. I know all your assumptions, prejudices, etc., but I can live with that. My sense of dignity is not so easily assaulted.

The problem is, if I return the favour to you as a gay person, you feel demeaned, and charge that I am attacking your humanity and dignity. You can't stand the thought of that and would do almost anything to wipe those thoughts from my mind. Why do some gay people feel that everyone has to affirm them, and if they don't, people must be despised and vilified?

Fortunately, so far, America has shown great respect for religious liberty, democracy, tolerance and pluralism. Now there are forces working hard to change that, and this is where religious people will have to join the combat intellectually and politically, for there are those hell-bent on banishing dissent on homosexuality, deeming every disagreement 'homophobia'.

Gay activists have become a major threat to free speech and liberty. They are not willing to live and let live, or to leave religious objectors alone. They want to control not just our actions but our very thoughts. If they are thought of as sinners or immoral, they can't abide that. They must drive that out of religious people's heads or drive them underground. There is a profoundly undemocratic, totalitarian proclivity in many gay people, perhaps as psychological overcompensation for so many years of oppression, prejudice and bigotry. It's often the case that the oppressed become the new oppressors.

I hope the American tradition of respect for religious liberty stronger than exists in any other industrialised country remains, despite the Supreme Court ruling on gay marriage. My problem is not so much gay marriage. My issue is the freedom granted to me to dissent and my freedom from encroachment on my religious conscience, however backward and insane that is. As long as my stupidity is not objectively harming anyone, I should not be coerced. America was founded by pilgrims fleeing religious persecution. It was founded by religious dissenters and that historical legacy has stood that country in good stead.

While America has always glorified its military, its mark of respect for religious liberty has been shown by the fact that Quakers and Mennonites in the 18th century won the right not to join state militias. As a country that has always privileged the school system and education, it exempted Amish parents from sending their children to schools outside the home, allowing them not to participate in 'worldly society'.

As Emily Bazelon pointed out in a New York Times article on July 7 ('What are the limits of religious liberty?') while it is illegal for a Muslim woman in France to wear a headscarf at a public school, the US Supreme Court last month issued a ruling that a woman who lost her job because of a companywide policy banning head coverings was entitled to that job by federal employment law. Eight of the nine justices agreed on that one. "This is really easy," Justice Scalia said in announcing that decision.

In the Supreme Court case of Holt v Hobbs, the court ruled that a Salafi Muslim prisoner had the right to wear his beard according to his religious custom even though it was against prison rules. The court said his religious belief trumped any prison rule, even if devised for security reasons.

Even with the celebrated Roe v Wade case of 1973, there have been strong exemption clauses giving religious objectors the right not to perform abortions or to offer counselling services or even referrals. States have the right not to offer contraception services, which many Christians see as a form of abortion. The US Supreme Court has always found a way to advance its notion of human rights while protecting religious objectors from the violation of their own rights. This is an important principle, which some gay activists are uneasy with and would obliterate.

Under what became known as the Church Amendment in 1973 (passed with almost unanimous support in Congress), a number of states have enacted exemption laws to protect religious rights. This amendment provided that receipt of federal funds would not provide a basis for requiring a physician or nurse to "perform or assist in the performance of any sterilisation procedure or abortion if his performance or assistance in the performance of such procedure or abortion would be contrary to his religious belief or moral convictions".

And in the recent highly publicised Hobby Lobby case which has enraged feminists and secularists, the Supreme Court backed a group of Evangelical business owners who said their religious conscience would be violated if they provided insurance coverage for contraception services to employees. That would make them complicit in their employees' 'sin', the employers stated. The court granted them that right and exempted them from the mandatory Affordable Care Act.

Then there is the Religious Freedom Restoration Act (RFRA) passed by Congress in 1993 which establishes the principle that when someone complains that a federal law substantially burdens his religious conscience, the government has an obligation to show that it has a compelling interest in applying the law.

So America has significant precedents for protecting religious liberty. But there are some vocal enemies of the open and free society who are seeking to overturn that and to force religious people to offer services to gay people even when their religious sensibilities are offended. They feel religious people have no right as photographers, florists or bakers not to offer their services to gay weddings. Some believe churches that refuse to marry gay couples should lose their tax-exempt status (I have no problem with the church losing state benefits, incidentally. I hold an exilic view of Christianity and even observe a religious festival called Feast of Tabernacles to symbolise that.)

In a closely argued 70-odd-page paper in the Yale Law Review , 'Conscience Wars: Complicity-based Conscience Claims in Religion and Politics', Douglas Nejaime and Reva Siegel make a case for gays' dignity claims being harmed by the very act of refusal to offer services to gay couples. They say religious people are using the language of religious liberty and complicity-based conscience claims to override the dignity of and to enforce discrimination against gays.

They say just as how denying black people services constitute an attack on their dignity, so with gays. "Just as Congress took the social meaning of refusals to serve into consideration in fashioning anti-discrimination laws governing public accommodations (for blacks), so, too, should the social meaning of refusal factor in judgments about whether and how to grant persons religious exemptions from laws of general application." The authors say, "A refusal to serve also has dignitary effects" on gays. Gays feel demeaned, dehumanised and debased when pastors refuse to marry them and Christian business people withhold services from them.

If that line of reasoning is allowed to take root, religious rights will be extinguished.