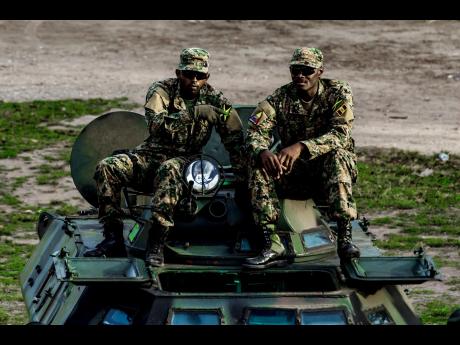 Every two years for the last 10 years, the Latin American Public Opinion Project (LAPOP) takes to the field out of its Vanderbilt University home base in the United States to canvass public opinion on political, social and economic issues. The 2014 results, tailored to Jamaica, 'Political Culture of Democracy in Jamaica and in the Americas, 2014: Democratic Governance across 10 years of the Americas Barometer', have been recently unveiled.

This newspaper and its affiliated radio station, Power 106 FM, have picked up on some of the juicier bits of data, but there is plenty more.

The morning after the launch, The Gleaner announced in its Page 1 lead, 'No gay marriage - Vast majority of Jamaicans remain adamantly opposed to same-sex unions'.

The Gleaner also picked up on the LAPOP data point that wealthier Jamaicans have expressed higher levels of fear of being targets of crime than poorer Jamaicans.

The survey delivers some rather surprising results for Jamaica. Not the homosexuality bit, which is no surprise! While, for example, half of the population regards security as the most important national problem, "the overwhelming majority of Jamaicans indicate a belief that their [own] neighbourhoods are safe! The number is 83 per cent, with only 17 per cent saying their communities are unsafe."

Furthermore, Jamaica has come in dead last on crime victimisation in the Americas. When asked if they had personally been the victim of at least one criminal act in the past 12 months, only 6.7 per cent said yes! In Peru, leading, the number is just under 31 per cent. In the United States, it is just below 17 per cent, and Canada 11.6 per cent.

But here's a big number in which Jamaica surprisingly leads. In fact, the LAPOP website, www.lapopsurveys.org, was running this chart as the 'Chart of the Week'. Jamaica leads the hemisphere in believing that a military coup would be justified when there is a lot of crime! We, at 52.2 per cent 'yes', are ahead of the coup-experienced countries of Latin America and ahead of Trinidad and Tobago with attempted coup experience in the Caribbean and which came in second to last at 22.4 per cent in favour. Experience does seem to be teaching wisdom in this case!

On the economic front, 41.8 per cent of citizens have told LAPOP that total household income meets needs. While this number places Jamaica fairly low in the Americas pecking order, I find it still surprisingly high, considering how we bawl about IMF-induced austerity, increasing poverty levels, unemployment and low wages. But this feeling of basic adequacy has been declining since the LAPOP surveys began here in 2006 when the number was 54.5 per cent saying total household income meets needs.

Quite noticeably, the survey is reporting that in the Americas, "those who are less educated, individuals with darker skin tones, and those who live in rural areas have comparatively lower wealth". No surprise here at all, especially with the skin tone.

things ain't what they seem

LAPOP polls corruption, both the perception and the reality of it. And things ain't what they seem. An overwhelming combined 91 per cent of poll respondents in Jamaica are of the view that public corruption is very common or common. And although the number has been dropping slightly since the 2006 survey, in 2014, citizens gave Jamaica an average score of 78 per cent on a 0-100 level of corruption scale, with 100 being the worst.

A very corrupt country indeed by perception! But when actual personal corruption victimisation is asked about, the numbers dramatically tumble. Only 9.8 per cent of respondents reported any kind of corrupt demand directed against them personally in the last 12 months. We are only outranked by Haiti in believing that a bribe is justified at times. They are 43 per cent; we are at 32.4 per cent agreeing.

The LAPOP claim for the Americas, in general, certainly is not true for Jamaica that most citizens interact with their government at the local level. Our dominant interactions are with central government, even for picking up trash by the NSWMA. While the level of trust in government is in sharp decline across the region, we are out front. Jamaica is the country with the lowest level of trust in government, scoring only 33.7 on a 0-100 scale. But even the high scores are low. Top three: Chile, 57.3; Canada, 55.9; El Salvador, 56.3. The United States runs in the middle at 49.5.

Things are not looking good for the future of democratic governance with these kinds of trust levels, even among the best. The factors that most strongly predict trust in government, LAPOP says, are experiences with corruption, physical insecurity, and satisfaction with services, indicating a link between institutional performance and trust in the institution.

LAPOP measures public trust in a range of institutions. The project has particularly focused on security, law and order, and justice institutions.

While suffering some decline, there is a surprising measure of residual trust in the police. In the 2014 survey, on a scale of 0-100, level of trust in the police scored 38.3. Nearly 62 per cent of citizens think the police are doing a very good to fairly good job; a surprising 68 per cent are satisfied or very satisfied with overall police performance! A good deal of sympathy and understanding may be at play here despite the serious bad press the police get in Jamaica. Slightly less than a third of Jamaicans are of the view that police harassment is a serious problem in their neighbourhood.

On almost every index of institutional trust, Jamaica leads the region in decline. Very worryingly, the LAPOP 2014 survey observes for the region "a decline in the percentage of citizens in the Americas who hold the combination of attitudes most conducive to democratic stability (high system support and high political tolerance) and a marked increase in the attitudes that can put democracy at risk (low system support and low political tolerance).

For Jamaica, the distribution of these democratic attitudes in 2014 displays a higher concentration of respondents in the 'unstable democracy profile in comparison to the regional distribution," the report says.

In one of those stark either or scenarios, the LAPOP survey 2014 found that the majority of citizens would opt for the promotion of economic growth over protecting the environment.

Jamaicans remain very much in favour of protests, with 66 per cent supporting legal protest, though very few are reporting personal activism of any kind, and a strong 36 per cent are willing to accommodate illegal protests if deemed necessary. Vigilante justice received the same level of population support as illegal protests at 36 per cent.

And 18.4 per cent of our fellow citizens - an increasing percentage over previous years of the survey - reportedly are not opposed to overthrowing the government as a means of change!

The LAPOP survey, available free, offers a great deal for policymakers and state actors and citizens to consider.