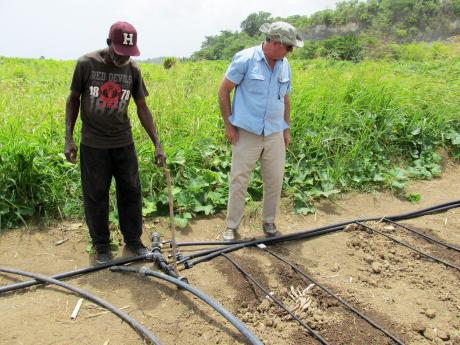 Lack of water for domestic and irrigation use is one of the most serious environmental hazards. Globally, one billion people lack access to safe drinking water and 2.6 billion lack basic sanitation, says Abundance, written by Peter Diamendic and Steven Kotler. But worse is to come, they say, because by 2050, the world population would have increased from 7.2 billion people to 10 billion. This could increase the problem exponentially if no substantial water resources for domestic and irrigation use are found.

Because of the present shortage, improvement of supply is likely to be more successful from technological solutions. In Jamaica, there exist many possibilities to apply technology that will yield supplies of water where none exists, or more supply where only limited amounts are available.

In agriculture, for instance, sugar cane estates are generally watered by canals fed from a main source that covers fields of cane through seepage to plant roots. However, that method has been displaced technologically by overhead sprinklers attached to a long rotating boom regulated by computers. I first saw this system in operation at Appleton sugar estate in St Elizabeth where several rotating overhead booms, each covering 60 acres, were in use. This operation was very successful in using water efficiency, because two-thirds of the water went directly to the roots of the cane compared to one-third from canals. More sugar for less water!

Turning to human consumption, drought conditions carry even more adverse impact when technology is sidelined. The city of Kingston and the two adjoining urban areas, Spanish Town and Portmore, are settled by nearly half the population of Jamaica. In this critical area, some new technology is now in place to treat sewage that flows into huge open ponds where it is oxidised to a more purified state which can be used for irrigation. While the oxidisation ponds are evident, I am not aware of any effort to use the treated effluent for plant fertilisation to reap the full benefit of the technology.

In the same area where the oxidisation ponds exist, two rivers flow that could be used to provide potable water: the Ferry and Duhaney rivers.

Ferry is somewhat saline and would have to be treated to remove the salt content. This is not new technology, but it is comparatively expensive and unused in Jamaica; but it is used in the Bahamas. In the mid-1990s, an American investor who was successfully operating a desalination plant in the Bahamas came to see me. He expressed to me an interest in Ferry. I made arrangements for him to see the appropriate minister. However, when they met he was advised by the minister that he had to get approval from the prime minister first to speak to the investor. This turn-off put an end to the discussion. But the day will have to come when desalination becomes more affordable. At that time, the Ferry River could become a major source of water supply.

The Duhaney River, as far as I know, has not been put to the test of technological purification. Or is this another cost-factor problem? If so, it can be overcome by technology to reap the benefit of increased supply of potable water for Portmore, Spanish Town and Kingston, since it runs in proximity to the juncture of all three areas.

In a crisis, both imagination and perseverance must be called on to make the impossible possible. I will instance here the case of the supply of water to Kingston from the Yallahs River nearly 20 miles away.

Kingston was facing the threat of severe drought in the mid-1980s. This was because no major water-supply scheme had been developed in the previous decade. To face up to this situation, I called on Caribbean Engineering, a small public company that was used for specialised schemes, particularly in UDC projects.

Today, we are facing a somewhat different problem to supply an abundance of water from a large resource base.

The conceptualisation of the plan was done under Agro 21 in the late 1980s by Joseph Adler, a civil engineer from Israel, and Stanley Rampairhis, local professional counterpart. The plan produced a reservoir called the South St Catherine reservoir, five times bigger than Mona. It would be by far the biggest in the island.

The reservoir, along with the present canal network, would solve the water shortage in the St Catherine plains for the entire 12,000 acres of irrigable land and provide water for approximately 200,000 residents. It would also alleviate the drought in Kingston by supplementing the Hermitage Dam and Mona Reservoir.

The South St Catherine reservoir would be filled and emptied by gravity to supply the surrounding agricultural lands. Approximately two mega watts of hydro energy would be produced.

The reservoir would take two and a half years to be constructed and would have cost approximately US$80 million, it was estimated some 30 years ago.

The implementation of the reservoir would create thousands of jobs, both permanent and temporary, and would have great positive social impact in the Spanish Town, Portmore and Kingston areas.

The study was taken over by the Petroleum Corporation of Jamaica (PCJ) in the end because PCJ provided some funding. The more-than-200-page study has apparently been shelved for nearly 30 years. If not, where is the study and why has it not been implemented?

The provision of additional millions of gallons of water for this critical area can be achieved through schemes like these.

Edward Seaga is a former prime minister of Jamaica. Email feedback to columns@gleanerjm.com.