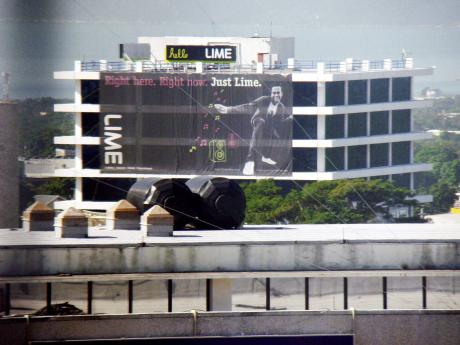 The headquarters of LIME Jamaica, which is being rebranded under Flow months after a telecoms merger began to take place.

Recently, I saw a post on Facebook that read, "If Digicel ah monkey and LIME ah black dog, what is Flow?"

My company just applied to LIME (now Flow) for a telephone line with Internet service (ADSL) in Ewarton. Apart from it taking a rather long time to come out of the system to reach actual installation, at the last moment, and only on enquiry, we have been told that there is a debt of $15,000 from 2002 that needs to be cleared before we can get additional service.

Now, that is from more than 13 years ago (what's the statute of limitation?). In addition, the said company's debt was consolidated by LIME around nine to 10 years ago and almost $2 million repaid over an extended period, little by little, through various payment plans. It could not be blamed if one line out of upwards of 70, at the peak, was overlooked by LIME itself in its consolidation.

Moreover, it seems penny-wise, pound-foolish to hold for ransom an existing customer, who pays on time and who is seeking further service, especially for such a small sum.

Could it be that LIME still hasn't learnt from its 'black dog' practices that allowed Digicel to swallow the bulk of the cellular market? Like billing for a full minute when you use just part thereof!

Which brings me to the monkey.

Some three to four weeks ago, I tried to call someone in Florida who had roaming on her cell. I had noticed that in the little over two months that she had been away, frequently I would get a recording like, "Kindly dial the last two (or three or four) digits of your phone number. You won't be charged for this phone call." (Or something similar.)

I would (quickly) try to dial the digits required and then dial the number I wanted. However, occasionally I would be at a traffic light and be so harried as to not either hear how many digits were required or to actually dial them correctly. Yet on the few occasions that I wasn't able to, there was no consequence as I continued on my merry way making calls.

On this day, however, I was not able to make any calls after 9 am, getting a recording like "the route you are trying is not allowed". (Not the exact wording.) Initially, I thought I had somehow inadvertently changed the settings on my Digicel.

After arriving at my office and settling down, I tried and tried resetting the 'settings'. In exasperation, I finally decided to call '100'. The agent who answered asked me a number of questions, including what's my IME of MEI or IEM number. Now, I didn't even know such a number existed. Anyway, I was told how to access this number and, after protesting a number of times, decided that to resist would be futile. I accessed it and gave the agent the number.

Half as hour passed without service. One hour. Almost one and a half hour. I called back '100'and spoke directly to a supervisor this time. She gave me a different reason for the problem and said that the agent should not have said it would be reconnected in half-hour and that it would take four hours. Was the monkey getting like the black dog?

Anyway, I waited, figuring that four hours from 12:30 would be 4:30. I waited until approximately 5.15 p.m. and called '100' yet again. I can't recall if it was the same supervisor, but she then took the ridiculous to the sublime to state that that department had closed at 5 p.m.

In frustration/vexation, I decided to call a manager that I was referred to on a previous occasion, and she got another supervisor on my case.

The long and short of it was my service, after getting three different reasons for the problem, was finally restored after 9 p.m. That's 12 hours after losing same and almost nine hours after providing all the info asked of me.

After complaining about Digicel in one of my columns a couple years ago, I got back a scathing comment like, "If him have so much problem with Digicel, why him no switch?"

Perhaps, I was scared of swapping black dog for monkey.

And don't think Flow is any better. But space doesn't allow. More anon.

It has been brought to my attention that perhaps there is a better way to save water and dollars other than spending more than J$4 billion to determine the source of water losses in the National Water Commission's (NWC)'s water-supply system, as was recently announced.

Highlighted by a friend, Patrick Aitcheson, a former KSAC city engineer, this method tackles the high degree of evaporation from our dams, etc.

Studies have been done in places like Australia and the United States that indicate that evaporation losses from water-storage facilities similar to the Mona and Hermitage reservoirs can be up to 50 per cent per annum. The exacerbating elements are high daytime temperatures combined with relatively high sustained wind speeds. Such studies have found that in the hotter summer months, the rate of evaporation from the storage reservoirs can exceed the actual demand.

Bearing in mind that the evaporation being referred to is that of very expensive, treated water, the issue demands urgent attention. Technologies have been developed for producing reservoir coverings (films) of various types that significantly reduce evaporation losses. These films incur moderately high capital cost but are more than offset by the relatively low maintenance costs.

Costing models have been developed showing the relationship among parameters including the cost of various covering options as well as the level of evaporation reduction achieved for each type of film. Ultimately, the cover option selected would be significantly cheaper than the cost of the water that is saved. That is, significantly below the break-even cost.

Therefore, investment in a study of evaporation losses from the Mona and Hermitage storage facilities represents a clear and urgent necessity.

If the situation in Jamaica mirrors that in Australia, for example, an evaporation prevention solution for both storage facilities can be achieved for a capital outlay of under J$750 million. The amount includes a five per cent maintenance cost for the first year of utilisation.

Couldn't the NWC at least examine/implement evaporation-saving techniques even alongside the other methods?

While Montego Bay's Elegant Corridor is looking really good with royal palms (and bougainvillea highlights) lining both sides from the airport to Lilliput (Iberostar) and proper lighting (LED no less) being installed, Kingston's Elegant Corridor remains just a talking point on the lips of the minister/bureaucrats.

The actual route hasn't even been finalised.

The latest word is that it's to run from Norman Manley International through Windward Road and up Mountain View. This is as opposed to travelling along Michael Manley Boulevard then up through South Camp Road and Tom Redcam to New Kingston.

Either way, the residents of Kingston are wondering, "Are elegant corridors reserved just for the tourists/tourism sector? Can't the locals enjoy it, too?"

Moreover, it would contribute to the economy of the capital city in tangible and intangible ways, increasing tourism (doesn't foreign business persons/returning residents count as tourists in a way?) and uplifting the quality of life generally. It would certainly 'pay' for itself over time similar to Emancipation Park.