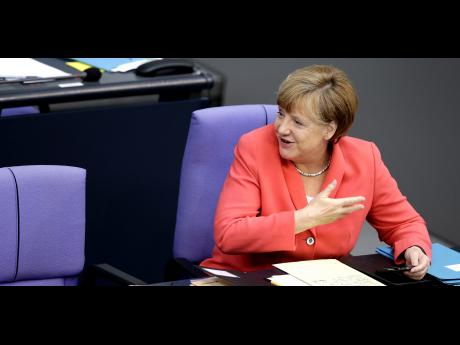 AP
German Chancellor Angela Merkel gestures during a meeting of the German federal Parliament, asking German lawmakers to clear the way for negotiations on a new, third bailout package for Greece. 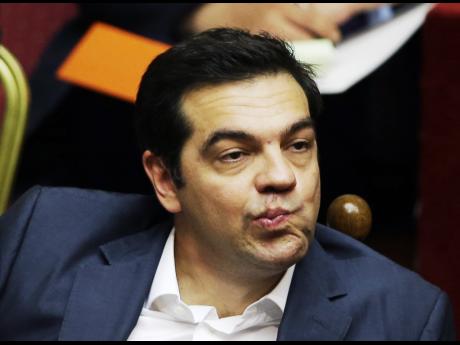 So, a deal has been struck with Greece

EU leaders/lenders are desperately trying to save face by spinning the 'deal' as including tougher austerity requirements than Greeks rejected in the recent referendum. Maybe. But there were significant additional benefits more important to Greece.

What Greece had complained about from the outset was that austerity couldn't be the be-all and end-all of the recovery road. PM Tsipras was happy to put his political future on this line in the Greek sand and often declared that, if certain concessions weren't made, he'd step down and allow somebody else to implement an austerity plus package.

On a warm summer's evenin'

on a train bound for nowhere,

I met up with the gambler.

We were both too tired to sleep.

So we took turns a-starin'

out the window at the darkness

'til boredom overtook us and he began to speak.

Big bully, Germany, has ensured that Greece's concession to the following conditions to any further bailout was widely publicised:

(1) a 'fund' (EU50 billion) will be created from the sale of Greek assets to help pay down the country's debt and finance investment programmes within Greece.

But privatisation was always part of the deal, and it's obvious that this 'brand new, second-hand' agreement is (to put it politely) ambitious in light of past form regarding the pace of divestment. It's clearly a face-saving device for the EU. What's new is the sale proceeds will no longer be committed only to paying down debt but some will be used to "finance investment programmes within Greece".

out of readin' people's faces;

knowin' what the cards were

by the way they held their eyes.

So if you don't mind my sayin'

I can see you're out of aces.

For a taste of your whiskey,

I'll give you some advice"

(2) Greece will be required to seek International Monetary Fund (IMF) assistance and to let the IMF continue to monitor adherence to Greece's bailout commitments.

So? Greece ran a huge bluff (my opinion) by resisting IMF 'meddling'. It worked because, after Greece walked away from negotiations with EU leaders, it was the IMF which, desperate to prevent a banking collapse by any means necessary, repeatedly championed debt relief for Greece. So, it's a big win for Greece to have the IMF officially on board as a lender with input on conditions. IMF had ALWAYS been involved as a process flow monitor.

So I handed him my bottle

and he drank down my last swallow.

Then he bummed a cigarette

and asked me for a light.

And the night got deathly quiet

and his faced lost all expression.

He said, 'If you're gonna play the game, boy,

you gotta learn to play it right'.

What's new? This has always been accepted as a part of the way forward. The problem has been that there was no corresponding imperative to inject growth stimuli. Finally, the agreement included more regurgitated conditions.

Yawn. A closer look will tell you what Germany isn't too anxious to publicise, namely, that EU lenders, in conjunction with the IMF, promised debt relief and an injection of growth funds. All sides wanted to avoid a Grexit (cute slang for Greece leaving the eurozone). This has also been achieved.

You've got to know when to hold 'em;

know when to fold 'em;

know when to walk away;

know when to run.

You never count your money

when you're sittin' at the table.

There'll be time enough for countin'

What we're seeing (if we look beyond the EU illusion) is the beginning of a new world order for debtor nations.

that the secret to survivin'

is knowin' what to throw away

and knowin' what to keep.

'Cause every hand's a winner

and every hand's a loser

and the best that you can hope for

is to die in your sleep

Kenny Rogers' recording of The Gambler, written by Don Schlitz, catapulted him to megastar status in 1978 after his career died post First Edition and was resuscitated by Lionel Richie's Lady, written (I kid you not) by Richie, in the toilet while Kenny recorded verse by verse. The Gambler was originally recorded by the composer but his 'version' only reached #65 on the country charts.

Kenny's cover was one of his five consecutive No. 1 hits; won him the 1980 Grammy for Best Male Country Vocal Performance; and inspired a series of 'Gambler' movies that became permanent parts of American movie lore.

Worldwide, mainstream media are desperately trying to paint this as a total Greek capitulation and an overwhelming victory for global money markets. Maybe they're right. Maybe not. I suspect that, as is usual in this world, nothing is as it appears, and media's carefully crafted chimera is designed to help international fiscal bosses keep the genie locked in the bottle.

Maybe Greece has failed, but Pandora's box is now wide open and the truth about austerity measures has escaped forever. Austerity without growth is a fiscal trick played on small nations by multinationals to keep these nations in permanent financial servitude. No new austerity plan has been added to Greece's obligations, yet mainstream media describe the accomplishment of the following substantial benefits as Greek 'failure':

* Significant funds from privatisation to be injected directly into the Greek economy as a growth stimulus.

Greek 'failure' has ensured that, in the future, wealthy creditors will have to be more patient with debtor nations and understand some symbiosis is natural and necessary. If debtor nations grow, creditors will be paid (maybe later than ideal) but without unnecessary fiscal cruelty to citizens of these nations who are NOT AT FAULT and who also have fundamental rights under international treaties. Greek 'failure' has taught multinationals like the IMF that 'debt relief' is not a perverted concept and debtor GDP growth is essential to any debtor/creditor relationship. To that end, a little empathy goes a long way.

In that context, I was heartened at statements attributed to Peter Phillips ('CARICOM must be heard', Gleaner, July 14, 2015) at the United Nations Third International Conference on Financing for Development in Ethiopia. The conference's importance is emphasised by the fact that it's none other than outstanding former PAJ president and Gleaner managing editor, Jenni Campbell, doing the reporting.

Peter Phillips said (to The Gleaner): "Our message is that the specific circumstances of small-island states and vulnerable middle-income nations [must] be taken in account.

"The value of this conference is in setting the agenda for how the world community is going to cooperate in ensuring that all countries can benefit from development, specifically to overcome the challenges of poverty."

Phillips continued: "What we want is to bring together the [Caribbean's] specific circumstances as highly indebted, vulnerable to climate change, and still suffering from the negative effects of the [2008] crisis and beyond."

Brilliant, Peter. Michael Manley would be proud. Of course, the best way to accomplish this, now that the Greek genie is roaming free, would be for CARICOM, like the EU, to speak as one federation. But, time enough for that. Your expressed objective, like 20 lawyers at the bottom of the sea, represents a good start.