The curse of linear thinking 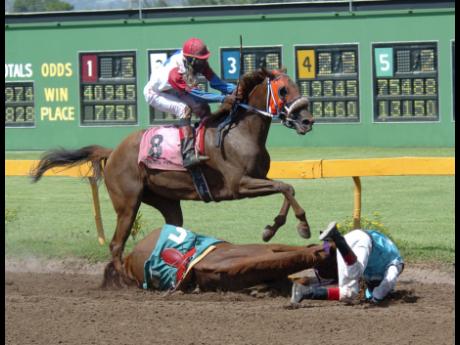 Ricardo Makyn
Jockey Milton Powell takes evasive action aboard the favourite, HEAD OVER HEELS, to avoid the front-running LA CHITA BONITA, who snapped a leg and decked her rider Paul 'Country' Francis, at Caymanas Park on July 23, 2005. Columnist Gordon Robinson said disqualification should be reserved for falls instead of mere bumps on the course.

I think I may have received my first Heavens-to-Murgatroyd threat!

Does this mean I'm a real journalist at last? Probably not. Guess who was the sender? No, not a politician. Generally, politicians understand criticism comes with the territory. No, not Booklist Boyne. He's still searching for his testicles (oops, sorry, spectacles).

On July 8, while at Caymanas Park blissfully minding my own business, I was accosted by what appeared to me to be a spectre in human clothing. For a surreal moment, I thought I'd died, been cast down into Marvel Universe, and met Red Skull on Slimfast. Apparently discerning I hadn't a clue who was talking to me, the spectre introduced himself in James Bond style. "My name is Williams, Cliff Williams," he began pompously. "I have a problem."

My intended response, "Only one?", was stillborn as the concept of allowing a word in edgewise wasn't on his agenda. In loud, boisterous tones, in full view and hearing of punters, he proceeded to viciously, vociferously berate me. His vehement vitriol, boiled down to gravy, accused me of:

• Knowing nothing about anything.

• Failing to understand anything about horse racing; and, my favourite,

To burnish the latter claim, he stridently boasted he was a very important marketing executive who worked for several big international companies. "This is how I earn my living!" he yelled. Pausing only to assure me, "I have to be nice to you in The Gleaner, but I don't have to be nice to you here," he ended what sounded to me like a demented rant which what I construed as a threat (at full volume) "DON'T DO IT AGAIN!"

Oh, dear. I guess I'd better pack it in even though I'm not grasping how my writing rubbish could so profoundly affect him. Still, for fear of what might happen next, I'll try not to do 'it' (whatever 'it' is) again, lest an even deeper misunderstanding of the difference between disagreements on how racing business works and "impugning professional integrity" leads to even worse.

So, I won't explain that a claiming system is introduced into horse racing for the sole purpose of permitting connections to self-handicap their horses. I won't mention claiming tags are natural counterbalances against an owner underhandicapping his horse (too low a tag) to land a gambling coup, since the sanction is that he loses his horse.

I remember the times when we used to

sit in the park holding hands together

I thought you'd take me back, but I was just a little

I won't bother to point out that, in a perfect claiming system, no horse is claimed. I won't reveal USA claiming statistics show a low rate of horses claimed. I won't say that, in Jamaica, it costs $1,000,000 to present a yearling at the sales but $180,000 to buy (oops, sorry, 'claim') a race horse in training.

I'm dreadfully afraid to state that, accordingly, Jamaica rarely holds a race day without several horses being sold in the claiming box. I won't explain that's why I say we don't have a claiming system (properly so-called) and our 'claiming' system is really a 'selling' system.

Well, I guess I've had my day, you let me go my way

Metaphoric descriptions like that give unimaginative people kittens. If all you can make with 'one and one' is 'two', you'll struggle with concepts that require lateral thinking. Give those same 'ones' to somebody like Steve Jobs and he'll make 'eleven' or a 'T' or the apex of an isosceles triangle or whatever his creativity leads him to make. That's why Steve Jobs started in his parents' garage and ended up heading the world's largest company.

Linear thinking is a curse, so I sympathise with all who suffer from this cognitive limitation. Linear thinkers might actually believe all handicapping systems are incorruptible.

In order to avoid doing 'it' again at all costs, I also won't defend the 'churn' against asinine arguments based on unsound, unrelated comparisons ranging from the sublime to the ridiculous. I won't bother to point out that the 'churn' is understood and implemented by most successful businesses and administrators from the corner grocer selling salted fish; through developed racetracks and gaming machine owners worldwide; to finance ministers calculating taxation rates.

But, I'm now shaking in my boots. So, not only will I leave Cliff and his security blanket, 'Jimmie', strictly alone (lest I be accused of doing 'it' again), I'm now an advocate for handicapping, but only if Cliff is named chief handicapper and Jimmie his deputy; both are paid handsomely with perks to include daily vitamins to keep them alive forever (remember, only Cliff "understands handicapping"); and nothing else changes.

I expect Cliff's professional superiority to establish conclusively, in record time, that claiming was the sole cause of horse racing's decline. Also, I'm looking forward to spotting a herd of pigs take off from the Norman Manley runway.

However, I'll overcome my mortal dread long enough to record my sadness that a "professional" media practitioner apparently feels he can resolve intellectual disagreements by resorting, in public places, to common verbal assault and attempts to muzzle press freedom. It's pathetic. I'm certain it doesn't represent Gleaner/Power 106 policy.

While I'm on horse racing, I'll spend a few words on the raceday stewards who appear to me to be very weak. It's also true that they have significant assistance from archaic racing rules, the interpretation of which in favour of punters and against the draughtsmen who unilaterally imposed them, they seem unable to acquire the intestinal fortitude or imagination to instigate.

Again, linear thinking rules. Let's step outside the stewards' box and look for a bigger picture. The most important people in horse racing, as in any other business, are its customers (punters). They're the source of every industry expense's payment. So, when customers bet on a horse that prevails narrowly after a thrilling stretch duel, THIS IS WHAT YOU WANT IN RACING. This is to racing as T20 is to cricket. Winning punters are ecstatic.

Suddenly, the dreaded 'stewards enquiry' sign appears. It's announced the winner 'intimidated' AND 'interfered with' a rival. It's disqualified. 'Winning' tickets are destroyed. Those ticket holders leave the track dejected. But, despite disappointment, they're willing to wheel and come again until it's further announced the commission reviewed the film, found neither intimidation nor interference, and reversed the stewards. Connections are paid their purses but 'winning' punters remain losers.

Well, I guess I've had my day,

you let me go my way.

THIS IS KILLING HORSE RACING! Unless there's a fall, no horse should be disqualified for an incident on the backstretch because the 'hindered' horse has plenty time to recover and achieve its best result. In the stretch, there should be no disqualification for standard bumps expected when one bets on horses (not machines) expected to race at more than 30mph. Disqualifications should be as rare as claims in proper claiming systems and only as last resorts.

The Loser (1967) was recorded by Derrick ('the man with two voices') Harriott. By the early 1990s when Freddy McGregor covered it, political correctness changed the name and lyric to I Was Born a Winner. Ugh!