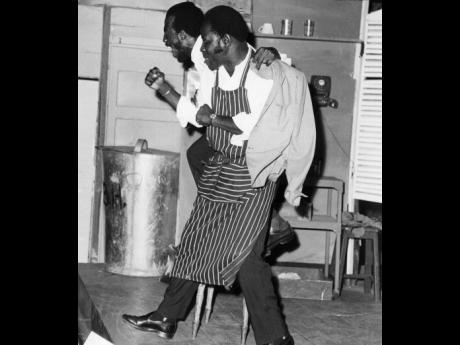 Ringo (Carl Bradshaw, left) and Joe (Stan Irons), in the roles of wait staff at a hotel, go through their paces at the 100th celebration performance of Trevor Rhone's hit play 'Smile Orange' at the Barn Theatre in 1972. Jamaicans' image as service-oriented have informed foreign perspectives, writes Kamille Gentles-Peart. 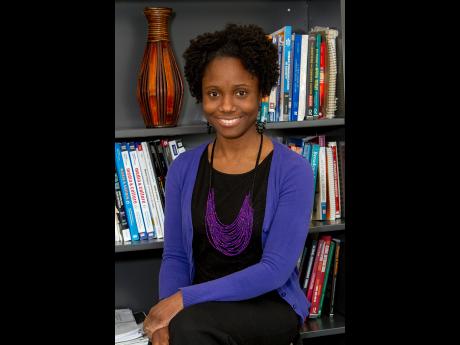 When we construct the identity of a country, we not only create the image for an abstract entity, we create the image of the people. Therefore, the existing global image of Jamaica influences how Jamaicans are perceived and treated, particularly when they go overseas.

In the American society, for example, the tourism model used to promote Jamaica creates the idea of Jamaicans as experts in taking care of tourists and uniquely skilled in the area of service. Within this tourism framework, Jamaicans, particularly black Jamaicans, occupy service-oriented, subservient economic and social positions.

The ideas and images of Jamaicans in the US date back to colonialism when to fulfil the agenda of the British, Jamaicans were painted as poor, dependent, childlike, but happy to serve. However, these ideas are reinforced by Jamaica's own practices and projection of its people to the world. In the nation's own marketing campaigns, Jamaican people, specifically black Jamaican people, are presented as 'others' from a distant paradise who are there to serve and service white foreigners. In essence, Jamaica's official image supports racist and colonial discourses that present Jamaicans as exotic black people who excel in the service industry.

So what is it like to be a Jamaican living in an environment where these ideas about Jamaicans are widespread and believed to be true? How does the current national identity of Jamaica as a tourist's paradise influence the real lives of Jamaicans in the US? My research with low- to middle-income black Jamaican women in New York City reveals that the effects are significant.

One major impact of Jamaica's reputation as a tourist destination is economic and social discrimination for Jamaican women. One of the first things that one notices about low- and middle-income Jamaican women in the US is that they, at least for a time, work as low-paid childcare workers, domestic help, and low-tier health-care workers such as health aides and nursing-home assistants.

This concentration of black Jamaican women in the personal and professional service industries in the US can be attributed to two main social factors: It is the result of women following the path of family and friends who have successfully found employment in those fields. It is also the result of US immigration policies that provide visas for these women to work in the service fields.

However, both of these reasons are related to the perception of Jamaicans as good for service; it is the image and reputation of Jamaican black women as built for servitude that facilitates their entrance into the service sector (as opposed to more lucrative, white collar) and forms the foundation for US immigration policies.

Of course, other factors, such as education level and race influence the women's participation in other parts of the American economy. However, we cannot deny that the perceptions of Jamaicans as happy servants affect black Jamaican women's chances to advance in American society.

Furthermore, Jamaican women are treated as inferior because of their cultural heritage. The women who work as childcare workers and nannies describe being treated as if they are illiterate by their white American employers and their friends. They talk about feeling infantilised by their employers who try to control and manage their schedules and who habitually intrude and make demands on their time and lives.

Jamaican women in other sectors of the US workforce also share numerous accounts of experiences with black and white American colleagues who treat them as simple-minded and unsophisticated and not very useful in contexts that require creativity and original thought.

The women's education is also devalued and undermined because of their heritage. A common theme among the women who attended primary and secondary educational institutions in the US is that of being held back or being placed in a lower grade when they enter American schools because of the perceived inferiority of the education they received in Jamaica.

In other words, the perception of Jamaicans as good at service helps to uphold a system that puts black Jamaicans at a disadvantage. Their reputation as predominantly service workers undermines their skills and education and tracks them into low-paying service jobs. Therefore, while Jamaican culture and products are taken up and adopted around the world, Jamaican black women continue to be excluded from many spaces.

A second major impact of Jamaica's tourism identity is alienation of the second generation. Women born in the US to Jamaican parents are disassociating from Jamaica. For example, some of the women of this group distance themselves from Jamaicans because of the reputation that Jamaicans have of being informal and unprofessional.

The Jamaican ethos of 'no problem, mon', which attracts tourists to the island, implies a sloppy approach to business that does not work well in modern societies. In fact, Jamaican people in the US, particularly their accents, are used to represent carefree living, not professionalism and good business sense. Therefore, the second-generation women sometimes hide signs of their heritage in professional contexts.

Many of the women also distance themselves from Jamaicans because of the reputation of Jamaicans as unsophisticated and unprogressive. Jamaicans are perceived as upholding conservative ideas, particularly about gender and sexuality, ideas that are out of sync with the 'developed' world.

Still, other second-generation women disassociate themselves from Jamaicans because of the image of Jamaicans as having bad taste, particularly in fashion and style. Jamaican fashion sense is seen as outdated and a failed imitation of American styles. For these reasons, the women would rather be seen as American (not Jamaican) when it comes to their position on social issues and stylishness.

In sum, the tourism brand - which presents Jamaicans as service-oriented (not professional), followers (not leaders), and simple-minded (not advanced) - is causing second-generation women to disassociate from Jamaica.

Jamaica needs to recognise the role of its insistent tourism brand in reinforcing negative ideas about its population, particularly black Jamaicans. This must begin with confronting the obvious unequal positioning of its black population in the nation's actual and projected identity.

Jamaica's current national narratives and tourism branding strategy have the country's black population at the forefront, but this is only symbolic. In reality, black Jamaicans continue to occupy lower social and economic positions than their brown and white counterparts and continue to be constructed as only good for service.

This reality of the black Jamaican experience makes a mockery of the motto, 'Out of Many, One People', and negatively shapes the lives of black Jamaicans - at home and abroad.

- Dr Kamille Gentles-Peart is a cultural studies scholar, with an emphasis on the Caribbean diaspora. She is an associate professor in communications and media studies at Roger Williams University, USA. Email feedback to columns@gleanerjm.com and kgpeart@gmail.com.