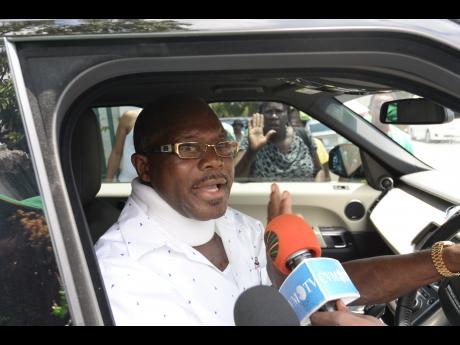 Jermaine Barnaby
Everald Warmington protesting the presence of journalists outside the gates of the JLP headquarters on August 11.

The odour of elections is as rancid as a ram goat rope and some politicians are telling us in no uncertain way that they should not be voted for. This is so both for polls that are due in Jamaica and the USA in 2016.

On the side of the Democratic Party, Hillary Clinton looks like a shoo-in. But among the Republicans, there are almost as many contenders as there are illegal immigrants trying to get green cards. Billionaire Donald Trump is the leading candidate and he has constantly shot off at the mouth and made comments that have been interpreted as racist, xenophobic and misogynistic. His remarks about blood coming from the eyes or 'wherever' of Fox journalist Megyn Kelly, who had grilled him, stirred the imagination and had commentators unfairly saying that he was making menstrual references.

None of us has the right to comment on Trump's off-the-chart behaviour unless we are willing to act decisively to address our own not-so-global Warmington. True, Trump is the frontrunner in the opinion polls, and our own Everald Warmington is a backbencher, but his continual record of disgusting and disrespectful behaviour has largely gone unsanctioned, thus demonstrating that he is free to act with impunity.

On Friday, August 7, he pushed away the camera of a female Gleaner intern who apparently was insistent on taking his photograph. Now, I empathise with him not wanting to be photographed, because it can feel like a violation and invasion. However, the battery of expletives caught on tape and video is inexcusable. No one dragged Warmington from under a rock and put him in Parliament. Being photographed by the press is an occupational hazard for public figures. If you want privacy when outside of your house, leave public life.

This boorishness must end. In 2011, in a most unmanly fashion, he told another female reporter to go to hell. In 2012, he pointed his index finger at the marshal of the House of Representatives, doing what I believe would either lead to a fight if he did it to the average man or, more likely, would open a can of whipping.

Still waiting for an attorney to advise me, it was my distinct impression that there was the kind of fear created by Warmington and under circumstances not covered by the protection that the House gave him, he could have been charged with assault. In fact, one should ask if parliamentary privilege extends to offences against the person. Indeed, I opined that "outside Parliament, one wonders whether Warmington would have been so brave and disrespectful".

Now, in the aftermath of the offence last weekend, he said he was sorry, and that is sincere because it is a self-description, rather than an apology. Within four days, he was back to his old tricks, and he, with his trousers below his waistline, with what looks like his legal 'strap' on his right hip, flicked the birdie, pointing his finger upwards, in the universal sign when ordering four Q flasks of rum. Warmington only knows the first letter in the word 'remorse', and knowing his recalcitrance, he might spell it with an F.

Yet, I am neither lawyer nor policeman, but it does appear that he might not have only crossed the threshold regarding common decency, but this time, he has more than sat on the border line; he has crossed it. There are cases of the police reviewing videotapes and charging performers for using indecent language, days after concerts and stage shows. Can't the commissioner request the tape from the media houses and determine whether or not charges should be laid? If the other 'Miss Ivy Last Son', Bounty Killer, cannot get away with 'cussing bad wud' in public, why should he? And once again, lawyers, advise me. If you push my camera forcefully and aggressively while shouting at me, isn't it assault?

In my previous comments regarding the repugnance of his behaviour, I predicted that this does not augur well for his party. And despite his being a 'safe' seat, "it takes more than a set of loyal followers to win an open contest". Call me goat mouth, but the Jamaica Labour Party (JLP) lost the election faster than a gay man at a female beauty contest. But that is the Labourites' problem; they get what they paid for.

My concern - fear even - is that Warmington might be an exemplar of what our youth are to aspire to. Trump, for all his money, is a dopey billionaire, with the offspring of a broom and foot rug living on top of his scalp. He is comic relief, no more than Tracy Morgan. For all his casinos, he will not hit the jackpot.

However, Warmington is already an elected official and is a member of parliament for the homicide hot spot, St Catherine South. More than 210 gun murders have been committed in that police division since 2012, and the Old Harbour subdivision is one of the hottest. There can be nothing positive about one of our 63 nationally elected leaders believing that it is acceptable to disrespect women, the media, authority, his party leadership and the Jamaican people on the whole, and use expletives publicly, without consequences. Fortunately, the offensive gesture with him looking like a 'bad bwoy' was on another newspaper's front page. Therefore, not as many saw it as could have.

Jamaica has a man problem, and black Jamaicans, like their American counterparts, need positive black role models. Unfortunately, it does appear that the people in his constituency accept this pattern of behaviour, or that his opponents are not up to scratch.

Notwithstanding this, I want my youth to know that there is one standard of decency and legally appropriate behaviour, whatever the socio-economic status of the individual. What do his (grand)children think?

Trump won't have to wait to say, "I'm fired!" But in Jamaica, let's see who has the guts to cat this bell.

• Dr Orville Taylor, senior lecturer in sociology at the UWI and a radio talk-show host, is the 2013-14 winner of the Morris Cargill Award for Opinion Journalism. His just-published book, 'Broken Promises, Hearts and Pockets', is now available at the UWI Bookshop. Email feedback to columns@gleanerjm.com