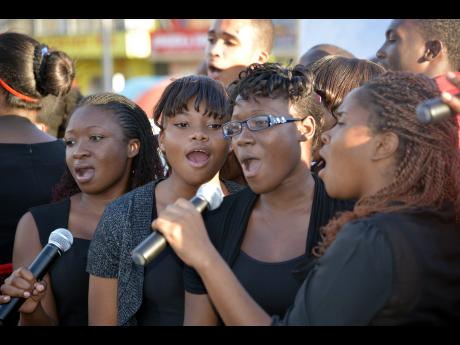 Norman Grindley
Members of the Chapelton Seventh-day Adventist Church perform at the SDA Metro Mission 14 Hope for the City evangelism initiative in Half-Way Tree, St Andrew, on January 12, 2014. The global Adventist Church has ruled against any prospect of women being ordained as pastors. 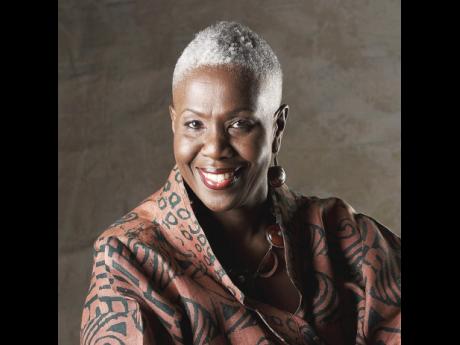 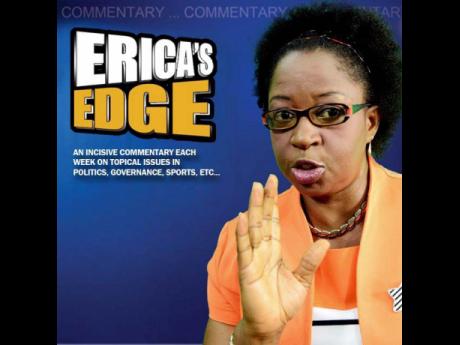 A grab from Erica's Edge, a video commentary on The Gleaner's website. Presenter Erica Virtue recently laid into the Adventist Church as being stupid in refusing to ordain women as pastors.
1
2
3

A vote by the world Seventh-day Adventist Church last month to retain the status quo of barring women from being ordained pastors has earned them much abuse in the Jamaican media. The church has dared to violate a cardinal virtue of 21st-Century society: that of gender equality.

For that unpardonable sin, my colleague Erica Virtue has slammed them mercilessly as a "stupid 19th-Century church" whose "stupid" conference delegates made that "stupid" vote to keep women in their place. Good enough to clean up vomit, filthy restrooms and smelly-foot-washing basins in church, but not good enough to be

pastors. Atrocious! Erica was hopping mad in that Erica's Edge video. She was definitely edgy. She was joined in her outrage by turn-back Seventh-day Adventist, Professor Carolyn Cooper, who, not to be outdone, had written about 'Those backward Adventists'.

"As a born and bred Seventh-day Adventist, I am thoroughly ashamed of the church of my youth. To think that in the 21st century, Adventists cannot agree that women are eligible for ordination as ministers! It's completely incomprehensible in this day and age." The Gleaner even gave the issue Editorial coverage, to underline its significance. Titled 'Unfortunate vote by Adventists', the editorial complains: "We are surprised at the quietude - some will claim almost secrecy - with which the recent vote by the global Seventh-day Adventist Church on the ordination of women has been greeted in Jamaica." Unacceptable. Echoing much of what angry Erica said in that meltdown video, the Gleaner editorial writer notes that with more 322,000 Adventists in Jamaica, representing our largest and fastest-growing denomination, we can ill afford to be nonchalant about its

internal business. It's our business. The Gleaner then asserts its own canonical authority: "Doctrinal arguments notwithstanding, we insist that gender inequality defies good sense and the logic of a 21st-Century world in which societies ought to make full use of, and extract, maximum value from their best talent of whatever gender."

My first observation is that, generally, whenever critics of the Church discuss religious issues, particularly wedge issues high on the hierarchy of secular values, there is a deep bellicosity, animosity and glandular reaction. Religion has always generated much visceral response, but there is a particular species of outrage, disgust and fiery intolerance that seems to characterise post-9/11, 21st-Century religious opposition. Yes, there has been strong invective in the past, and Thomas Paine and Robert Ingersoll were biting, but the opposition is on steroids today.

There is a place for rage and anger at stupidity, injustice and inequality. But that can't be all one brings to it. There must be some place for reasoned, measured discourse and for dispassionate dialogue. If all we are bringing is the visceral, we are merely fighting fundamentalist bigotry with secularist bigotry.

Let's calmly dissect these responses to the Adventist vote. I know journalists are not expected to be theologians and philosophers. But they must be reasonably well-read and educated about the issues they presume to write about. They must offer intelligent commentary. If you are going to be calling people stupid - and I don't necessarily object to such strong language - then you have to ensure that you escape that charge.

Erica's Edge, The Gleaner editorial and Professor Cooper all make references to "the 21st-Century". By this time, surely, every church should be enlightened to the fact of gender inequality. But wait. Let me understand something. The Christians - at least conservative ones like traditional Adventists - claim that their Bible contains eternal, transcultural, timeless truths. They claim to worship a God who is omniscient, knows all things and is ahead of time. Am I supposed to believe that He had to wait until the 21st-Century to reveal to His Church that women should be equal to men or should be able to occupy any office a man can? Was biblical revelation limited to the cultures in which it was given? That would undercut what we had been told from childhood about the Bible. So it brings me to a key issue. This whole issue has to do with hermeneutics, the science or principle of interpretation.

In other words, what is your concept of the Bible? Is it an evolving book whose interpretation is flexible and elastic, stretched to fit the times, with the Holy Spirit guiding us as to how to use Bible principles to confront present-day challenges? Or is it fixed, inerrant, inflexible, cast in concrete? When the Editorial writer says, "Doctrinal arguments notwithstanding, we insist that gender inequality defies good sense and the logic of a 21st-Century world," he (or she) is being simplistic. I will refrain from saying stupid. You can't say "doctrinal arguments aside". A "religion of the book" is necessarily invested in doctrinal arguments! Journalists must leave religion alone if they don't understand even its basics. I believe every journalist should be exposed to philosophy and comparative religions as part of his basic training. Certainly philosophy. Because we need that grounding to be able to comment sensibly on public issues.

Carolyn Cooper cannot "imagine that in the 21st Century, Adventists cannot agree that women are eligible for ordination". What's hard about that to understand in a traditionalist religious group like Adventism? Churches have particular hermeneutical approaches. Those who hold power in the Adventist Church believe that God has given truths in the Bible not dependent on the times or culture. They are universal truths. One such view is that a woman cannot pastorally represent the male Christ who is the head of the Church. Adventists teach absolute gender equality but functional differentiation. That distinction, Carolyn Cooper, Erica Virtue and The Gleaner might not accept, but they should at least acknowledge it. Lambaste Adventists for their "backward", "stupid" distinction, but understand it. (And please, Adventists, they have a right to take their vehement stand. Don't abuse them. )

I have no objection to Carolyn and Erica's stinging denunciation of the recent vote. What I object to is the failure to situate this theological conservatism. Columnists, editorial writers and journalists must give readers context, not just vociferous opinion. Anybody in any bar can give that.

Perhaps we should consider that the Adventists' real problem is that they accept as God-given what is really a sexist, patriarchal Bible. (That's a view.) Perhaps it is their "sacred" scripture which is the problem. Some secularists have attacked Christianity's problems at its roots: It's the Bible that is the problem, not those misled and brainwashed by it. The well-known biblical scholar David Clines from the reputable University of Sheffield (where Clinton Chisholm studied, incidentally) has a most provocative paper which he delivered this year at the Ethel M. Wood Lecture.

It is titled 'The Scandal of a Male Bible'. Clines, who has never been afraid to ruffle feathers, minces no words: "The Bible is a male book, written by men for men. It enshrines male values, promotes and inculcates them. It everywhere esteems men above women. It portrays a male deity with male values. The scandal of this male Bible is twofold: It is first that the Bible is deeply compromised by its ubiquitous adherence to specifically male values and, second, its masculinity is hardly ever noticed or mentioned even in our much egalitarian world."

So Carolyn and Erica, your problem might not be with the "stupid", "backward" Adventists but with a ... Bible.(I dare not say it in a fundamentalist country!) Clines continues in his paper: "The Bible was written by men. Every named author of a biblical book is male. There is no actual evidence that any book was written by a woman - even Esther. And the Bible was written for men. Women did not, on the whole, read in the world of the Bible. It's the men that are addressed in the Bible as in the Ten Commandments where the readers are enjoined to not to desire their neighbour's wife, but women are not warned against desiring their neighbour's husband. When Paul writes to his churches, he addresses his 'brothers", not his brothers and sisters ..."

Let me not disturb you any more. But religious interpretation is complex. We are not helped by simplistic analyses and glandular commentary. A Christian Church cannot blithely follow 21st-century ethical imperatives while holding on to conservative hermeneutics. Journalists and other commentators must factor that into their commentary. Except they are just interested in 'ray-ray'.