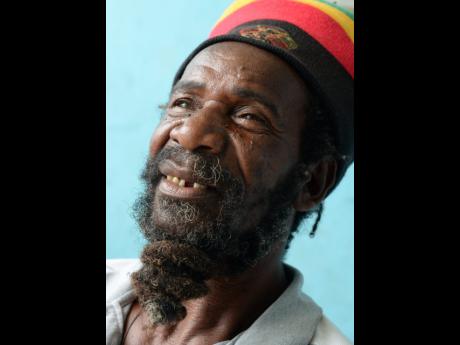 Jermaine Barnaby
Raphael Young recent graduate of the Jamaica Foundation For Longlife Learning (JFLL) talks about his success at fifty eight years old during a one on one interview with the Gleaner at Majesty Gardens Community Center on Saturday, July 11, 2015. 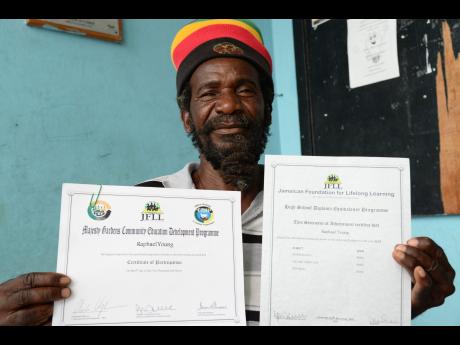 Jermaine Barnaby
Raphael Young, 58, a recent graduate of the Jamaican Foundation For Lifelong Learning, shows off his certification from the literacy organisation.

Marcus Garvey would've been proud of Raphael Young. We know Garvey. Or so we think. Last Monday, August 17, his birthday was commemorated in little pockets here and there under the theme 'Liberate the Minds of Men through Education'.

Garvey scholar, UWI Professor Emeritus Rupert Lewis, spoke on the theme at the event organised by the St Ann Parish Council at Lawrence Park in St Ann's Bay. Not far away in the town is Garvey's birthplace in shabby condition and not the fine national monument that it should be. Nothing like the Mandelas' home in Soweto, South Africa, a national heritage site and tourist must-see, which I have seen.

One of the things about Marcus Garvey that we have failed to emulate is his under-standing of the importance of impressive stateliness for the pride and dignity of a people. National monuments, where they exist at all, are generally in poor, run-down condition. And even Garvey's Liberty Hall had to be restored. Much of the National Heroes Park, in which his repatriated remains are interred, is a dust bowl and parking lot instead of being a beautiful, gracious and significant space in the heart of the city, grand as green space for recreation as well as being a tribute to the national heroes.

But who is Raphael Young? He wasn't known outside of his community of Majesty Gardens in Kingston until The Gleaner ran his story. At 58, Raphael was the oldest graduate from the basic level (grades one to six) High School Diploma Equiva-lency Programme of the Jamaican Foundation for Lifelong Learning (JFLL), which the Majesty Gardens Community Education Development Programme in the prime minister's constituency hosted.

Young has had a hard life, with little formal education. Given away at six months old, his alcoholic adoptive mother didn't send him to school much and he was forced to hustle from early, "so dat likkle food could go on the table".

From ever since he could remember, he has always wanted to be a music producer and feels he has the talent for it. Because he could hardly read, he didn't go much further. But when The Gleaner first tried to contact him for the interview, he was unavailable. Having just graduated from the yearlong JFLL Programme, Young was then busy sitting a HEART/NTA entrance test to get into training for welding and carpentry. The man is 58!

When JFLL showed up in Majesty Gardens, he told himself, "I have to grab this opportunity because not everybody get a second chance." The teasing by younger participants only firmed up his determination, says the man who took the awards for Best Attendance and Most Improved Student. "Whenever I get work in class, I don't put it down. When I go home, mi try to go over what mi learn, and most importantly, I never miss a class, and I was always early."

Since Raphael Young's youth, educational opportunities have vastly increased and literacy levels have gone up significantly. But still, too many youngsters are exiting up to secondary education without good literacy skills. And many others are recklessly squandering the education opportunities that Raphael Young never had until he was 58.

The JFLL is JAMAL rechristened and rebranded. The Michael Manley Government launched the Jamaica Movement for the Advancement of Literacy (JAMAL) in 1974, with the kitchen bitch kerosene lamp as its logo and the adult literacy rate running around 50 per cent.

JAMAL broke the back of adult illiteracy in this country. It's a real pity that the school system has kept feeding the much-reduced pool of illiterates over the years.

JAMAL ran on volunteerism. As a youngster, I, too, caught the spirit. Not far from Raphael Young's Majesty Gardens in Greenwich Town as a student myself, I taught an 'advanced' JAMAL class that prepared already-literate students for the then popular Jamaica School Certificate (JSC) examination pitched roughly at grades nine and 10 of secondary education. JSC subjects in sufficient number and quality could then get people into teacher education and nursing school, among other things.

Several of my JAMAL students went on to tertiary professional education. One with whom I have kept in contact over the years, mostly because she is a relative, and now around Raphael Young's age, went on to become an effective teacher at the primary level. I have since taught thousands of students, but those JAMAL students, my first class, most of them older than I was, remain very special.

Marcus Garvey, himself a truly educated, if not degreed man, was a great advocate of the power of education. Garveyite Ken Jones, also a truly educated man, much of it self-education, and with a cultured and independent mind, has left us recently, but he has left behind a rich collection of what Marcus Garvey Said, including about education.

Incidentally, Ken's subtitle, which is perhaps the best known and most repeated Garvey quote, is "Up, you mighty race! You can accomplish what you will."

The trouble is, this Garvey statement doesn't mean what most people think it means. It is not a note of triumphalist exuberance at all. It is a cry of despair and disillusionment.

Ken Jones devotes a section of his book to what Marcus Garvey had to say about 'Negro Weaknesses'. "The Negro fights himself too much," Garvey complained. "His internal conflicts constitute the puzzle of our age ... . Every other day he is smashing up what he has made, and so the process goes on. He never permanently constructs. We now realise that the system takes us nowhere."

Later on, Garvey hit even harder. "The monumental disgrace of the Negro race is that wherever it finds itself, it is more occupied with fighting and destroying its own institutions than in seriously helping to build them."

Much of this tendency, Garvey blamed on the bad education of the Negro. "Having had the wrong education as a start ... the Negro becomes his greatest enemy". He then declared, "Most of the trouble I have had in advancing the cause of the race has come from Negroes."

"Those who know me as a Negro leader," Garvey said in 1936, only four years short of his early death at 53, a disillusioned man, "cannot say that I have ever flattered the race or tried to deceive it against its own interest. I have always been frank - and brutally so - even to my own disadvantage. I intend to be frank ... and to be brutally so for the purpose of drawing to the attention of the sleeping Negro the seriousness of his position in a material civilisation."

It was the sleeping Negro who was shouted at in that famous Garvey quote. "Up [wake up], you mighty race! You can accomplish what you will."

Garvey was a great proponent of liberating education. "Education is the medium by which a people are prepared for the creation of their own particular civilisation and the advancement and glory of their race." But he also emphasised the importance of practical and technical education for industry and enterprise. Raphael Young is off to the HEART/NTA at 58 to learn skills and be certified. "Never stop learning," Garvey said. "The only time you [should] stop learning is when you die," Young says.

Three of the 26 propositions of Marcus Garvey's People's Political Party were directly concerned with education, and were far-reaching for the time, 1929. Garvey proposed a Jamaican university and polytechnic; a government high school in every parish capital for free secondary education with a night continuation school; and a public library in each parish capital. But hear this one about the shabby place where his remains now lie! Garvey advocated in 1929, "The beautifying of the Kingston Race Course into a National Park, similar to Hyde Park in London."

Raphael Young, at age 58, has tasted the liberating power of education for both mind and action, as Garvey would have it, and is on his way to higher heights with his new powers and capacity driven by his ambitions. Thousands of youngsters young enough to be Young's children and grandchildren and flush with opportunities, which he never had, should take a leaf out of his Jamaican Foundation for Lifelong Learning book.