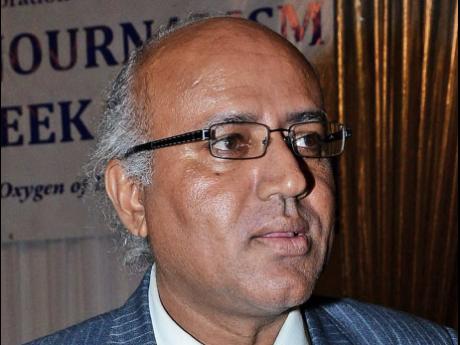 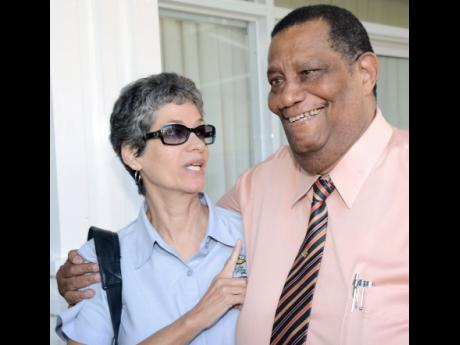 Last Friday, August 28, marked exactly one year since Roger Clarke, Jamaica's longest-serving agriculture minister and arguably its most colourful politician of recent vintage, died of a heart attack, ironically, after successful surgery at a Florida hospital to alleviate back pains caused by a pinched nerve.

His absence has resulted in a significant loss of colour, excitement and amusement from the political arena, which will be difficult to replicate - given the one-of-a-kind persona of this late Westmoreland native. Fiercely and unapologetically loyal to the People's National Party (PNP), he was truly a people person, as accurately captured by Gleaner columnist Ian Boyne in his tribute to Clarke.

He wrote: "Roger Clarke was the Miss Lou of Jamaican politics: Dearly beloved by large numbers of Jamaicans, young and old, for his warmth, wit, good-naturedness, affability, Jamaicanness, down-to-earthness, and even his chubbiness.

"The collective mourning of the nation since last Thursday when news of his death broke represents a deep wound to the soul of a nation; a huge sense that we have lost something rare in his passing: a bridge across our gnawing political divide, an old-fashioned 'niceness', a sterling example of generosity of spirit and non-partisanship, and exemplar of humaneness."

These words effectively define the essential public personality of Roger Harold Clifford Clarke, matching, as they do, the sentiments expressed by long-time parliamentary colleague and former prime minister, P.J. Patterson, who said, in part, in remembrance:

"The strong or irreparable loss to Jamaica and massive outpouring of genuine admiration reflect a crossing of the divide of politics, of social class, of colour and creed.

"The widespread recognition and admiration of the worth and work of this gentle giant springs from a narrative which spans the bridges of a humble beginning; the steadfast pursuit of acquiring knowledge in his early passage from boyhood rule; an industrious and diligent application in the theatre of work engagements; to the arena of public service for the building of the nation and the betterment of its people."

My appreciation of the accuracy of both narratives stems from the fact that I was privileged, in my capacity as agriculture reporter for The Gleaner, to interact with Minister Clarke at a number of levels and places, on numerous occasions. Whether it was in the air-conditioned boardroom at the Ministry of Agriculture or a field assignment in rural Jamaica, I would anticipate some questions about my assessment of his tenure, just as much as Minister Clarke would look forward to my reportage, especially when he had made some grand announcement.

Over time, he came to realise that my articles did not necessarily revolve around what the minister said, and in some cases, ignored or treated his pronouncements as the secondary aspect of the news.

"What kinda &*#@$* that you write the other day?" he asked in full view and earshot of the technocrats in his ministry, as well as anyone else nearby, including other journalists.

I then proceeded to explain the rationale for my writing and we enjoyed a lively discussion, with neither of us yielding ground but fully appreciative of each other's perspective.

This scenario, with a few adjustments, would be repeated during his tenure, to the extent that some members of staff at the Ministry of Agriculture were convinced that I was on a personal mission of harassment, which demonstrated to me just how little they knew of the big man.

This is because while fiercely defensive of the performance of the agriculture sector under his leadership, Clarke was also appreciative of objective criticism.

"Bwoy, you beat me bad wah day ya," he would greet me on occasion, smiling and, at times, lacing his comments with choice Jamaican words. However, in all of this we retained a mutual respect. If he entertained any rancour towards me, Roger Clarke did an excellent job of masking it.

This is because he came to understand that for me, it was never personal, but always about getting out the real news, which was sometimes hidden deep within the pages of pronouncements prepared by the communications staff. And over time, it became compulsory to record his remarks and take notes, instead of depending on his prepared speech. This is because he would cross out or ignore entire sections of the address.

"When it comes to the thing named agriculture, with all that you hear them saying, that is my forte. Me know it like the back of my hand, and I don't have to ask anybody whether I am doing a good job or not," he told me via telephone from Florida on the day he was scheduled to leave hospital to begin the recovery process, prior to returning home.

In what I believe to be one of his last interviews, Clarke made it clear that he had no intention of leaving the political arena any time soon. However, it was his decision to call me back at work that Sunday on my mobile, to share the following information, that really made the story published the following day.

"Mr Serju, when you see me again, you going think is Usain Bolt."

And so as this nation celebrates the sterling accomplishments of all our athletes at the Bird's Nest in Beijing, China, I can't help but remember and salute Roger Clarke, politician extraordinaire.

- Christopher Serju is a reporter covering agriculture, the environment and rural affairs. Email feedback to columns@gleanerjm.com and christopher.serju@gleanerjm.com.