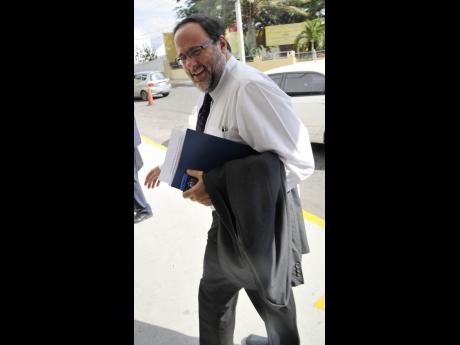 The Ministry of Justice welcomes the opportunity to respond to letter to the editor titled 'Getting the justice system to work', which was written by Mr Brian Sale and published on August 15, 2015.

Mr Sale's letter acknowledged that there are numerous factors that contribute to the slow pace of the legal system. However, he focused on what he describes as an apparent inability of the legal system to make serious use of technology, primarily computers. This is an important issue, on which we wish to take this opportunity to shed some light.

JEMS (the Judicial Enforcement Management System) is an automated vase-management system intended to streamline case management while integrating the various elements of the judicial system, from case initiation through to disposal. The introduction of JEMS in Jamaica commenced in 1998 with a pilot site at the May Pen court. JEMS is currently implemented in the registries of the Supreme Court (including the probate, matrimonial and commercial registries), all of which rely on the software on a day-to-day basis. These registries have uploaded into the system 95 per cent of their cases from 2003 to the present.

JEMS also includes a read-only Internet portal called iJEMS, which offers judges online access to information pertaining to cases to which they are assigned. This portal feeds directly from JEMS and is only accessible by authorised parties to the case.

In addition, a Prosecuting Attorney System (PAS), now called AMANDA JEMS, has been piloted in the Office of the Director of Public Prosecutions (ODPP) since 2013. The PAS allows attorneys to monitor and update their cases from anywhere, via a secure connection. The system is compatible with JEMS, which allows for the electronic filing of cases and synchronisation of dates. As at July 31, 2015, courts in 11 parishes were using the software, 650 case files have been scanned and data on a total of 611 cases have been uploaded.

The Evidence (Special Measures) Act 2012 has provided the platform for another significant ICT initiative to increase efficiencies in the courts. This legislation facilitates the admissibility of evidence in criminal proceedings and coroner's inquests given by witnesses in remote locations using a live link.

Courtroom No. 3 at the Supreme Court and Courtroom No. 4 at the Corporate Area Resident Magistrate's Court facility at Half-Way Tree have already been retrofitted to accommodate the measures allowed by the act, which has recently been brought into effect.

Over the past three years, through the Justice Undertakings for Social Transformation (JUST) programme supported by the Government of Canada, a range of IT equipment has been procured, including laptop and desktop computers, scanners, printers, servers and other data-storage solutions, video-conference solutions for the courts, Attorney General's Chambers, Ministry of Justice, and the ODPP at a cost of almost J$32 million. During this period, the justice system also received ICT equipment through international donor support and from the United States Embassy, including real-time stenography machines provided to the Supreme Court to assist in court reporting, and new desktop computers, laptop computers and high-end servers provided to various courts across Jamaica. The ODPP was also provided with laptops, desktops, a computer server, multifunction printers, a document digitiser and a firewall appliance, 33 tablets have recently been provided to Crown counsel by the Ministry of Justice, and we have equipped 15 courts with Wi-Fi that will enable remote access to the PAMS by Crown counsel.

The justice system has also received some support from the local private sector, such as a heavy-duty photocopier donated by the Musson Group and, most recently, from Proven, which donated J$1 million to purchase 14 laptop computers that will be used by judges to access court files and to be used while they are on circuit.

Most recently, a contract valued above J$46 million was signed this week for the installation of a High Density Filing System at the Supreme Court's Public Building North. This will greatly improve the conditions under which court files and other documents are stored and secured.

While the foregoing examples illustrate that serious use is indeed being made of technology in our courts, it is also true that the full implementation of the JEMS software has been delayed because of challenges created by the proprietary nature of the software and the high costs associated with its installation islandwide. The annual subscription currently costs the Government more than US$75,000 for its use in the Supreme Court, and any plan to extend the use of JEMS beyond the Supreme Court would cost the Government of Jamaica US$2,000 per annum for each user who enters data into JEMS.

The ministry is, therefore, currently in the process of conducting a review and developing an implementation plan for an upgraded, web-based, ICT platform that can be implemented in the courts, including the Resident Magistrate's Courts. The funding for this is being made available through the European Union's Jamaica Security Accountability and Transparency (JSAT) programme, to provide technological support to the Justice Sector. Components of the JSAT programme include implementation of an Electronic Case Management System in the courts, and to refurbish and equip 18 selected courtrooms with the requisite technology to facilitate video evidence and electronic recording of evidence.

A consultant is being engaged to conduct an assessment of the existing court structure and needs relating to the rehabilitation of court facilities for digital recording of evidence. Upon completion, a full report will describe in detail the hardware and software needs for the selected courts, and the necessary pieces of equipment will be purchased and installed. It is anticipated that this will be in place for the first half of 2016. A total of approximately J$316 million has been allocated to these activities.

While deeper and more effective use of technology is critical to achieving a greater level of efficiency, the challenges facing the justice system are complex and cannot be solved only through the greater use of technology. There are significant gaps in human resources and physical plant, requiring additional resources at a time of fiscal consolidation.

In this environment, the Ministry of Justice is pursuing a comprehensive and multifaceted approach to justice reform that seeks to maximise on what is available to us, through introducing several pieces of strategic legislation.

We thank Mr Sale for his letter.

- Damian Wilson is senior public-relations officer in the Ministry of Justice. Email feedback to columns@gleanerjm.com and damian.wilson@moj.gov.jm.