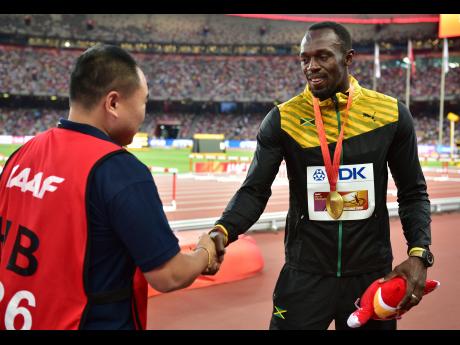 Ricardo Makyn
Song Tao, the Segway-riding cameraman who knocked Usain over moments after winning the 200m, presents the double gold medallist with a gift of contrition shortly after Bolt received his 200m medal.

Best-selling celebrity Jamaican-Canadian writer Malcolm Gladwell puts it this way in a commentary on the New Yorker website: "Two years of injuries, indifferent training, and lousy performances. He's had a bad year. Meanwhile, Justin Gatlin has had one of the greatest summers on the track of any sprinter in recent history. Everyone thought Bolt was the underdog. And what happened? With 10 metres to go, Gatlin found himself in a position he hadn't been in in two years. A competition on his shoulder ... and he fell apart; literally, Gatlin's perfect form disintegrated and he looked like a child flailing his way down the sidewalk."

There were some lessons, the runaway successful author opines. "First lesson? The mental and psychological aspect of elite performance is vastly underestimated. Second lesson? Never ever count out a Jamaican when the chips are down." Usain Bolt thrives on doubters. Start telling him he can't do it; wonder whether is legendary status is about to expire and you get him all fired up; all that fire in his belly propelling to burn up the track.

Ordinary mortals from planet Earth melt and wane under criticism. Bolt, from the planet of Usain, blazes under the heat of criticism and scepticism. Usain Bolt is a study in excellence and endurance. He provides life lessons for us. If we would only learn.Usain knows how to come back from behind. And how to sprint ahead of doubters. The 2004 Olympics was disappointing for him. He dropped out in the first round. It was at that Olympics that he first asked Glen Mills - himself now a legend - to coach him. Mills was then on the national team. Mills recalled that encounter in a 2012 interview with me on 'Profile'.

"I was passing him on the step and I heard him say, 'It's you I want to coach me.' I didn't stop, however. I kept on walking ... ." The following day, Bolt's manager told Mills that Bolt requested that he coach him. From then, Mills set out certain conditions.

Mills continued in that 'Profile' interview: "When he came to me, he had a lot of problems with his Achilles and lower back, but most of all, he had lost some of that spunk, some of his confidence, because of what had happened to him. You have to understand that at 15, he had taken the world by storm, and then two years on, nothing was happening for him. Also, the press and the public were disappointed and they gave him a hard time."

But winners never quit, and the first race that must be won is the race of self-confidence. Back to 'Profile':

Ian Boyne: You were concentrating on the psychological?

Glen Mills: Yes. We sat down. I told him about the importance of having mental strength and that what he was going through, he should use it to build toughness and the confidence needed to compete. I remember when things really got bad, I said to him: 'I believe in you. You are the greatest sprinter God has ever made, and if you believe in yourself as I believe in you, and if you believe in me, I can get you there, no matter what happens and what is being said. The same people who are crucifying you will be the ones who will praise you when you win."

Mills said he told Usain things like: "'You have to learn to lose in order to win.' I knew he needed three years to rebuild, and so would have to learn how to lose during all that period. If you believe in yourself, then losing is part of the training."

This was before American management and neuroscience experts had started talking and writing about 'failing forward', and before books such as Failure: An American Success Story started rolling off the press, praising failure as an ingredient of success. Our own Glen Mills was teaching these principles here to the man who would become the greatest athlete in earth's history.

You can't begin to talk about Usain Bolt's meteoric success and Jamaica's athletics superpower status without talking about the phenomenon named Glen Mills. An icon not just in sports, but an extraordinary human being. The worshipful respect and adoration Usain has for him is what you see translated on the track.

Usain himself talks about Mills' impact on him in his book, Usain Bolt: 9.58: "Glen Mills was so different from all my previous coaches ... . I came to trust him completely. While I do the mental and physical work, Coach fine-tunes me like a mechanic with a top-of-the-range sports car. If you put a big turbo on a car but you still feel you should be getting more from it, you take it to Dyno shop where they do a complete check and tweak little bits all over to get that bit more out of its performance. That is what Glen Mills does with me."

Our success is never solitary. We truly stand on the shoulders of others. And the training has to start early. Mills told me something very important about Bolt: "He learns very fast and is very attentive. It has to do with his upbringing and parental influence. If you can get him to believe in what you're telling him, he will execute."

That foundation in the home is crucial. And so is the community. Curse Jamaica and its institutions all you like, without our strong athletic tradition in our schools, without Champs and our track and field clubs and cadre of coaches, there would be no Usain Bolt and Shelly-Ann Fraser-Pryce. We have the two finest athletic coaches in the world in Glen Mills and Stephen Francis. They didn't come out of thin air. They are part of a system.

Perhaps the most gratifying thing about our being able to boast the fastest man and woman in the world is that they both have been home-grown. Built by Jamaica. Neither America nor Europe can claim credit for our success in athletics.

But we can't discount our athletes' own enormous sacrifices. Bolt might be a party animal, but if he were totally undisciplined, he could never perform at peak levels. Our athletes in Beijing did us proud. But we have to single out our fastest man and woman. Shelly-Ann Fraser-Prayer is an indescribable gem. If you want to see a woman who is purpose-driven, focused and relentlessly passionate about success, look at Shelly-Ann Fraser-Pryce.

Like Usain, she had to learn how to deal with doubters and detractors. She had to find a way not to let them break her spirit. As with Bolt at the Olympics in 2004, so with her at the Osaka World Championships in 2007. She was devastated and dejected. But like Usain Bolt with his saviour Glen Mills, so she found succour in Stephen Francis. As she told me on 'Profile', "Stephen heard I was crying and so he came to me and asked why. And he was like, 'Don't worry about it. Next year, you're going to run leave all those girls.'" And she did! The power of encouragement. The power of having someone affirm you.

Shelly is another athlete who listens to her coach. Jamaicans are known to be intensely individualistic and opinionated. But the humility of Usain Bolt and Shelly-Ann Fraser-Pryce is instructive. What a gracious spirit Usain displayed on the track with Justin Gatlin after all Gatlin's boasts and put-downs of Bolt? And that touching photo with Bolt smiling broadly and joking with Gatlin after the 200m race. The Real Big Man, with a big heart of forgiveness and a great generosity of spirit. Life lessons for Jamaica.