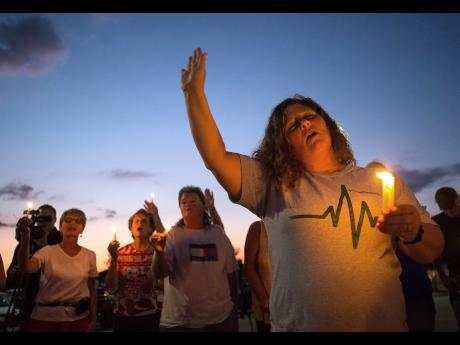 AP
Stephanie Gray attends a vigil for journalists Alison Parker and Adam Ward, who were killed during a shooting at Bridgewater Plaza in Moneta, Virginia, last Wednesday. Vester Lee Flanagan opened fire during a live on-air interview for WDBJ7, killing the two journalists.

I honestly would like to write another column on the World Athletics Championships in Beijing, especially since Usain Bolt shoved the Gatlin challenge back down his throat along with a good dose of pride.

Like every Jamaican and those who advocate clean sport, including the BBC and the Jamaicans, who spelled out that acronym, it was about national pride and, of course, since 2008, when we first invaded Beijing and taught the Chinese the words of our "Eternal Father ... ", the debate has ensued as to whether Jamaica or the USA is the sprint capital of the world.

American track and field great Carl Lewis tried to use all kinds of measures to 'prove' or reassure himself that America is the greatest. While I salute the pride of my friends up north, I have consistently cautioned that having an unrealistic and deliberately cultivated self-image not only masks real problems that have to be fixed but, more important, if ignored, could likely have grave consequences.

These repercussions are not only felt by Americans living in Uncle Sam Land, but those of us living in Jamrock. In plain language, an insecure and unsafe America is just as horrific a prospect for Americans as it is for us here. When America eats the spoiled yogurt, we suffer downwind.

In these championships, the US has won a single sprint gold medal, while we have won three out of the possible six. Even overall, up to the beginning of the weekend, the Kenyans had won seven gold medals. Whatever Lewis might think, the former dominance of the USA is a reflection of a greater blind denial. This is the worst performance of American track and field athletes I have seen in years, and telling oneself that America is number one and okay does not make it so.

Somebody in Washington needs to have the guts to get up and say that there are things wrong with America and stand up and say, let us fix it and stop focusing on other countries in order to deflect from the failures within that country.

For all the attempts to demonise his black side, President Barack Obama is spot on regarding gun control. And, as the anti-gun control lobbyists, such as the National Rifle Association, try to protect their narrow interests, the arguments for better monitoring of gun ownership become more persuasive.

Last week, as the world focused on the starters' pistols in Beijing, as Usain Bolt and Shelly-Ann Fraser-Pryce rewrote history, other guns were fired, writing another chapter of bizarre shootings in the USA. This time, it was particularly touching because it involved the murder of two journalists on air while a live broadcast was taking place. Sacked African-American journalist Bryce Williams shot his former colleague, Alison Parker, and cameraman Adam Ward, before eventually turning the weapon on himself. This occurred in Virginia, where just eight years earlier a college student killed 33 persons on his campus.

NOT AN ISOLATED INCIDENT

This is not an isolated incident. The most infamous Columbine massacre, where 13 persons were murdered and more than 20 wounded, in Colorado in 1999, is the poster piece for such occurrences. In December 2012, a young man killed 26 people in Connecticut, including 20 children at the elementary school where his mother worked. And, of course, the cold-blooded massacre of June 2015, at the Emanuel African Methodist Episcopal Church in Charleston, South Carolina, where Dylann Roof murdered nine people, including the senior pastor and state senator Clementa C. Pinckney. All of the shooters had different motives and oftentimes there are suggestions about their state of mental health.

But here is a hard, cold fact. Even if the murderers had severe schizophrenia and multiple personalities, none of those personalities could shoot if he did not have access to a gun. It is very unlikely that one can commit a mass killing by flinging 'rockstones'.

Since this last Virginia episode took place in real time, the spin doctors cannot call it something that it is not. Obama declared, "What we know is that the number of people who die from gun-related incidents around this country dwarfs any deaths that happen through terrorism." That is not an idle comment. The USA, like Jamaica, has a homicide problem. More specifically, we have a gun-murder problem. Guns are just too easy to come by in the USA, and many of them find themselves here.

Fareed Zakaria, CNN commentator, reported that since the 9/11 attacks when Islamic extremists performed a suicide mission and murdered thousands at the twin towers, the number of Americans killed domestically by guns has reached astronomic levels. Doubtless, it is not proportionally as bad as Jamaica, but 150,000 homicides is a hell of a lot of people. Conversely, only 74 Americans were killed in the USA by terrorists since.

Using countries such as Germany and Japan for example, Zakaria noted that they have fewer guns and more stringent gun-control laws. America's gun homicide rate is 50 times that of Germany, and despite the evidence from social media and controversial cable channels, does not have 50 times more insane people.

True, the second amendment to the American Constitution enshrines the right to bear arms, but government has an obligation to protect the majority of the population and not simply any interest group. Generally speaking, developed countries with strict gun-control laws have lower gun-homicide rates.

Interestingly, a late 1990s gun buyback and passage of a National Firearms Agreement was the approach in Australia. This involved the repossession and purchase of more than 650,000 weapons and restrictions on the ownership of firearms of a certain calibre. It also involved a tight and comprehensive registry of all legal firearms in the country. Result: a significant and sustained decline in the rates of homicide and suicides.

It is a no-brainer, but it requires honest men and women who are tired of seeing legally acquired guns used to kill innocent Americans. Good move, Obama; sorry about the whipping in the sprints.