Ian Boyne: Religious persecution in the US? 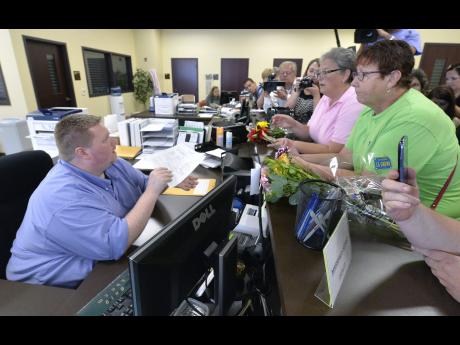 AP
Rowan County Deputy Clerk Brian Mason hands April Miller and her partner, Karen Roberts (right), their marriage licence to make sure it is correct at the Rowan County Judicial Center in Morehead, Kentucky on Friday, September 4. April Miller was one of the plaintiffs against Rowan County Clerk Kim Davis. 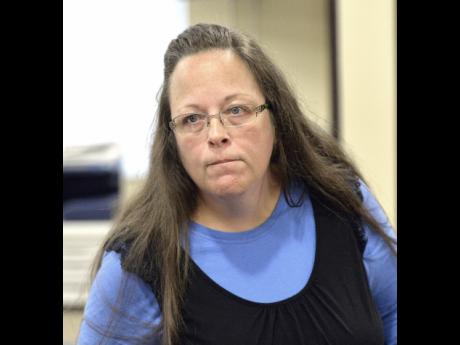 In a highly publicised case in the United States, an Apostolic Christian county clerk who has consistently refused to issue marriage licences to gay couples, despite being ordered to do so by the courts, was hauled off to jail last Thursday for contempt of court.

Christians, who have been warning for some time that as unthinkable as it might have sounded, that they would be persecuted in "the land of the free", are now saying, "I told you so!" They say this is only "the beginning of sorrows" and that religious liberty will soon be extinguished as the gay and secularist agenda takes sinister shape. Meanwhile, gay activists and secularists are saying that there can be no tolerance for religious exemptions to state and federal laws and that court rulings that give sanction to religious exemptions, like Hobby Lobby, must be overhauled.

It's a fierce and intense battle and the stakes are very high. In this most recent case, which has cast fundamentalist Christians as martyrs and victims, Rowan County Kentucky Clerk Kim Davis has defiantly refused to issue marriage licences to gays, saying this violates her religious conscience.

"To issue a marriage licence which conflicts with God's definition of marriage with my name affixed to the certificate would violate my conscience. It is not a light issue for me. It is a Heaven or Hell decision."

Many Christians will applaud her for her courage and her willingness to 'suffer for Christ', while others will see her as an embodiment of the fanaticism, bigotry and backwardness of religion. Her imprisonment is only going to intensify the already contentious American debate over religion.

Exemptions for the faithful

On Tuesday, Kim Davis issued a statement: "I never imagined a day would come where I would be asked to violate a central teaching of Scripture and of Jesus Himself regarding marriage. To me this has never been a gay or lesbian issue. ... It is a matter of religious liberty which is protected under the First Amendment ... . Our history is filled with accommodations for people's religious freedom and conscience."

That last statement is indeed true, and it is that fact that is disturbing secularists who feel the courts and Congress have gone too far in granting religious exemptions. For example, the Supreme Court's much-debated Hobby Lobby ruling exempts private businesses from issuing health insurance that offers contraception services to employees if that violates the religious conscience of their owners. The Religious Freedom Restoration ACT (RFRA), passed by Congress in 1993, establishes the principle that when someone complains that a federal law burdens his religious conscience, the government has an obligation to demonstrate that it has a compelling interest in applying the law.

The LGBT community in the United Sates is vociferously fighting these religious exemptions. In a policy document titled LGBT Policy Spotlight: State and Federal Religious Exemptions and the LGBT, it is stated: "The Supreme Court's interpretation of the law in Hobby Lobby - alongside states' ever-increasing roster of religious exemptions - ... raises serious concerns about how these vague exemptions are being used to harm others, interfere with law enforcement, and undermine the rule of law."

This is precisely what Kim Davis is said to have done: undermine the rule of law. What does a Christian do when the law of the land conflicts with biblical law (or what that Christian understands of it)? Does the person insist on religious freedom and demand an exemption to that law? Does the person resign or defy the law and pay the consequences? Some would say Kim Davis should just resign. She says, constitutionally, she has a right to her job. How strong is her case, really?

Though on biblical grounds I agree with her in opposing same-sex marriage, I don't believe she has a leg to stand on to defy the State and the rule of law. She has a right to resign from the job or to quite properly and justifiably disclaim personal culpability in issuing that gay licence. She is issuing those licences in the name of the State, not her own name. She is not the one authorising same-sex marriage. She is merely carrying out what the final constitutional authority in the country has decided.

Under Kentucky law, county clerks are responsible for issuing marriage licences. Kim Davis not only refuses to issue any such licences to gay couples since the Supreme Court made gay marriage legal, but she has refused to allow her staff to do so because her name has to appear on the licence. So she says even if she herself does not sign the copy, her name appears and she can't allow any licence leaving that office with her name affixed.

Now that presents a serious problem for the rule of law when federal law gives people the right to marry and someone decides that her religious beliefs forbid that so they can't get married. What if county clerks in other jurisdictions decide to follow suit? Wouldn't that be anarchy and the breakdown of the rule of law? What if a county clerk who belongs to a racist sect refuses to issue licences to interracial couples on the grounds of religious conscience? Should that be honoured, too? Christians have to accept that they are living in secular, pluralistic states. They are exiles. They have no right to demand that biblical law be the law of the land, and they have no right to impose that on others.

I read the judgment of the case brought against Kim Davis. In it, District Judge David Bunning, who ruled against her, argued his case compellingly. He said: "Our form of government will not survive unless we, as a society, agree to respect the US Supreme Court's decisions regardless of our personal opinions. Davis is certainly free to disagree with the court's opinion, as many Americans likely do, but that does not excuse her from complying with it. To hold otherwise would set a dangerous precedent." I totally agree. That would be anarchy.

Religious people have to be careful not to bring Christianity into further disrepute and to make rational people see us as a nuisance. We must reason well. Judge Bunning demolishes her every argument in his tightly reasoned judgment. The judge said: "Davis repeatedly states that the act of issuing these licences requires her to 'authorise' same-sex marriage. A close inspection of the form refutes this assertion. The form does not require the county clerk to condone or endorse same-sex marriage on religious or moral grounds. It simply asks the clerk to certify that the information provided is accurate and that the couple is qualified to marry under Kentucky law. Davis' religious convictions have no bearing on this purely legal inquiry. It is not a sign of moral or religious approval."

This is precisely why she can issue those licences with a clear conscience that it is not she who is authorising same-sex marriage. She is not a minister of religion being forced to pronounce God's blessing on the union. She is an agent of the state blamelessly and dutifully passing on a licence the state grants when certain conditions are fulfilled. This involves no compromise or 'sell-out'.

No more than Christians at the tax office collecting taxes from gambling establishments or 'Back Road' hoteliers. If Davis feels she is violating her conscience, resign. But you can't hold people ransom and defy the law of the land while holding a government office.