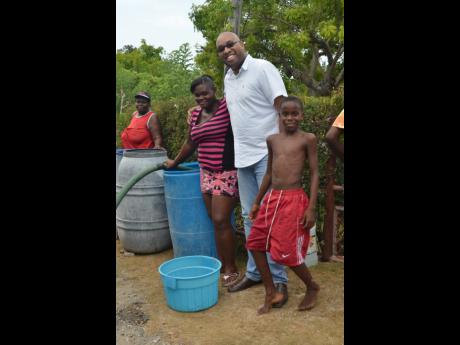 Contributed
Delano Seiveright, JLP aspirant for the Eastern St Thomas seat, watches as residents in the drought-stricken constituency collect water from a truck financed by him. Seiveright's political ally Matthew Samuda described a 50-million redevelopment plan for St Thomas as an election ploy, but the same charge could be made against him by rival supporters of the PNP.

In another 150 years, I am sure that Fenton Ferguson, Delano Seiveright, James Robertson and young Matthew Samuda will not be around. And up to this point, I doubt that any historical sociologist analysing the parish will find anything to include in a book regarding the political legacies of the 2000s. Samuda, president of Generation 2000 (G2K), the youth arm of the Opposition Jamaica Labour Party, had me rolling off my chair with the truism of the century. He accused the Government of hatching a developmental plan, and "the promises of milk and honey are obviously a ploy to gain votes". Duh!

With the odour of election as rancid as stale cabbage water, only the most naive of politicians would think that his opponent is not making the best use of the situation at hand. Damn it, man! Even the motto of Morant Bay High School in the parish tells it: Carpe diem (seize the moment).

Furthermore, someone's taking advantage of a situation does not mean that it is based on misinformation or falsehoods. For example, last year this time, Seiveright opened the coop on the chikungunya outbreak, while liars and People's National Party (PNP) apologists kept telling Ferguson, health minister and member of parliament for Eastern St Thomas, that it was Labourite propaganda. Even when the news reporters and cameramen were bent out of shape with arthritic pains, rashes and fevers, Mr Fast Track and Comrade Tribaliz kept calling me on radio saying it was an exaggeration.

Similarly, I doubt that Seiveright is uninterested in the politics of drought, and is reporting the cases of water-borne diseases out of the goodwill of his heart. Doubtlessly stirring up mud, he wants a seat in the house named after one of the parish's two heroes. And since the opposition leader is not giving the public any reason to vote for young Delano, he must go cut his own grass and push the grass cart to wrath. Yet, I wait for him to show the evidence, but honestly, I hope it is not true, because one ought not to do politics with people's health.

But, unless one wants to rewrite history, it is indeed the 150th anniversary of the Morant Bay War, or Rebellion, as it is commonly known, and only the most intellectually bankrupt of politicians - and there are many - would think that it is not worth commemorating in a massive way. Moreover, by its own admission, G2K, via its vice-president, Dwight Crawford, has mouthed, "It is full time that the Government assume its responsibility of uplifting the parish of St Thomas from being ranked the most impoverished, to one that flourishes economically."

So then, when the Government, seizing the moment, introduces a $50 million sustainable development plan for the parish, we can say that it is skilfully timed, and long overdue, but it is wrong to militate against it. True, the money is coming from the Sugar Transformation Programme, to the tune of $40 million, with the remainder coming from the milch cow, the National Housing Trust (NHT). However, the siphoning of money from the latter for this purpose is one 'out a many' that I finally give the thumbs up to.

A committee comprising chairman, Bobby Sephestine; academic professor, Neville Ying; Baptist cleric, the Rev Norva Rodney; Ainsley Henriques, chairman of the Jamaica National Heritage Trust; and former town clerk and career civil servant, Errol Greene, who is now secretary/manager of the St Thomas Parish Council, have been appointed to pilot the process. Lori-Ann Peart Roberts, parish manager of the Social Development Commission, an arm of government populated by sociology graduates, and Sephestine both agree that the parish is ripe for development, which incorporates both economic and social changes.

St Thomas is a flashpoint in Jamaica's history, and I am pleased that 150 years after the war and 18 years after the death of Michael Manley, who brought the poor and working class to the PNP, somebody is finally taking heed.

Looking retrospectively at the uprising, a royal commissioner described it as a "no-rent movement aggravated by the want of a good labour law and tribunals suited for the easy settlement of labour questions". In 1865, Baptist Deacon Paul Bogle protested and marched against social conditions and legislator George William Gordon warned about poverty, inequality and social injustice. Indeed, Edward Underhill, secretary of the British Baptist Missionary Society, wrote, complaining, "... [People], then, are starving, and the causes of this are not far to seek ... ." It was a perfect storm and we must not forget it.

there will be war

Nonetheless, I am happy that the committee has Ying, an expert in human resource development, in its midst. He, more than anyone else, understands the point I have been making to the Jamaican Government since the late 1990s to early 2000s, that unless the average Jamaican worker sees an increase in the ability to own a set of walls, with a sheet of zinc, then, like Haile Selassie said in 1963, days before the 102nd anniversary of the rebellion, and Bob Marley said in 1976, there will be 'war'.

Furthermore, thousands of workers in the east have lost their jobs since the 1990s, when Manley handed over the reins of the party, and just recently, the jobs of 500 workers at the Golden Grove Sugar Factory were made redundant. My real fear is that the Government, which has consistently ignored the call to amend the labour laws, is going to perpetuate the negative legacies of the pre-war era and allow for the increase in social violence to continue.

To date, the Labour Relations and Industrial Disputes Act does not properly define a 'worker' to be a person who is a 'labour-only contractor', as other legislation in CARICOM does. This has allowed for an increasing number of bona fide workers to be excluded from union representation, to be considered workers under the act, and access to the Industrial Disputes Tribunal, the only place they can be ordered reinstated.

Also, the Employment Termination and Redundancy Payment Act has more holes than the clothes of the Evan Jones' Golden Grove banana man and barely protects the worker against unscrupulous employers, who contribute heavily to party finances and with whom trade unionists, doubling as politicians, dine, if not wine.

Without social justice and worker protection at the core of the development, it will be doomed to failure and another war. The Government might not read the newspapers, but I hope it reads the books.