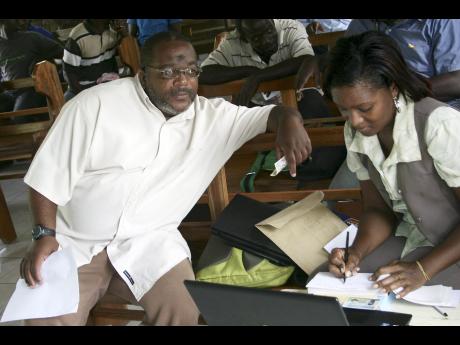 Christopher Serju
In this April 2012 photograph, farmer Christopher Russell waits to pay for his receipt book as Cardia Duhaney, acting parish manager for St Catherine, Jamaica Agricultural Society, records his particulars in Bushy Park. The receipt book is being promoted as a critical element of the fight against praedial larceny, which is estimated to cost Jamaican farmers $5 billion to $6 billion each year.

When Jamaicans think about crime, they think about murders, rape, abduction and other usual violent acts. This is especially true for those in non-farming households and in many media reports. Yet the National Crime Victimization Survey Report (2013) finds that praedial larceny is the most impactful crime affecting Jamaica.

Still, with rising murders, praedial larceny and other farm theft are largely viewed by the general public as relatively trivial. The theft of agricultural produce does enjoy a good measure of attention in rural communities because neighbours show concern for each other's welfare, but there is a culture of silence even here, and farm theft is often not reported to the police. THIS MUST CHANGE!

Between January 2014 and January 2015, 873 incidents of farm theft were reported to the Jamaica Constabulary Force. However, only 237 arrests were made and 39 persons convicted. The culture of silence pervading rural farming communities is quietly crippling the agriculture industry as thieves grow bold and confident that they will face limited or no consequences. THIS IS DANGEROUS.

Praedial larceny has evolved from 'petty theft' to a very organised criminal activity. It now relies on cell phones, trucks and other forms of transportation, weapons and even international trade in guns for meat. It is very profitable to criminals.

The Ministry of Agriculture and Fisheries and the Jamaica Constabulary Force are stepping up their activities to curtail farm theft. They are educating the public, amending and enforcing laws; labelling the problem as 'farm terrorism'; and attending and supporting court cases.

They are targeting the major players who are the buyers or end-users and seeking legal amendments to broaden the definition of praedial larceny, increase fines and simplify the language of the law. Since the inception of the unit, 68 farm visits have been done and more than 30 community meetings held. The unit was also present at the Denbigh Agricultural, Industrial and Food Show 2015 doing public education.

In 2008, the Ministry of Agriculture and Fisheries reported that the loss of agricultural produce as a result of praedial larceny was approximately J$5 billion annually. At this rate, farmers would have lost J$50 billion in the last 10 years. WE CANNOT AFFORD THAT.

The Jamaica Constabulary Force has also stated that there is a nexus between the larceny of farm produce and transnational organised crime. Police intelligence shows that some of the livestock stolen in Jamaica are sold to other countries, where they are exchanged for guns. There are also instances where farmers try to protect their hard investments and are brutally murdered by armed larcenists who show no regard for the right of the producer to the stock.

Farmers stay up late at nights watching over their crops and animals. They think twice about leaving their farms for any length of time. As a result, praedial larceny has complex sociological impacts on rural communities and the rural economy.

The highest incidents of praedial larceny and other farm theft have been reported in the parishes of St Catherine, Clarendon, St Elizabeth, St Mary and Manchester. A study conducted by Lyle Graham (2014) highlights that 50-80 per cent farm theft is experienced at the parish level and an average of 68 per cent at the national level.

In 2008, crop and dairy subsector loss was estimated at US$181 million. In an effort to counter praedial larceny, primary producers have reduced acreages under production, changed crop types and the type of livestock as well as the size of their poultry operations. Others have moved their agricultural production to different locations in an attempt to prevent the so-called 'two-foot puss' from reaping what they have not grown. Some stakeholders in aquaculture have also abandoned their operations.

This crime does not profit us, the end-users. Jamaicans should be very careful when buying agricultural produce. The Praedial Larceny Prevention Coordination Unit has received several reports of agricultural produce being stolen just a few hours after being sprayed with pesticides and other chemicals.

Unfit agricultural produce, as well as medically treated animals, is also stolen and sold to consumers. Additionally, several butchers have been arrested and charged by the unit for butchering without a licence, selling uninspected meat, having no food handler's permit, having no public-health certification and using forged mark or stamp to deceive the public.

The unit has also investigated cases where animals were slaughtered and the carcasses removed, leaving the foetuses (of the cows) behind for the farmers to dispose of. Stolen agricultural produce has the potential to end up on any Jamaican's plate, including that of our children. We can no longer sit back in silence while criminals wreak havoc on our country and our health.

Since its inception, the unit has conducted numerous operations in collaboration with the Jamaica Constabulary Force. To bolster the effort of the unit, farmers are being encouraged to comply with the law. Under the Agricultural Produce Act, farmers must register with the Rural Agricultural Development Authority and issue receipts for the sale of their agricultural produce.

Receipt books can be purchased at any Jamaica Agricultural Society office. The produce receipt provides a means of traceability at all stages along the value chain and helps the police to verify whether or not the produce in transit is stolen or legally purchased.

Let's stop farm theft together and make Jamaica the place of choice to live, work, raise families and do business. The unit also welcomes private-sector support.

- Trudy-Ann Edwards is praedial larceny prevention coordinator in the Ministry of Agriculture and Fisheries.

Email feedback to columns@gleanerjm.com and trudy-annedwards@hotmail.com.