Daryl Vaz: Crime does not pay. It COSTS! 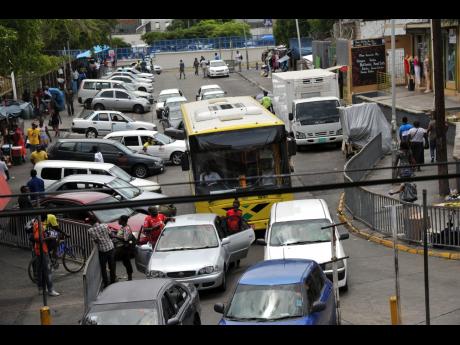 It is not coincidental that the best years of economic performance for Jamaica have coincided with periods of lower crime levels. Neither is it coincidental that those two factors have correlated with periods when the Jamaica Labour Party formed the Government. The electorate will be asked to vote for a new government sometime between late November and the end of 2016. It is of fundamental importance that electors place the issue of crime control squarely before both political parties and demand practical answers and commitment as to how a future government will make this country safe for all Jamaicans.

To put the crime situation better into context, consider that the global murder rate based on 2012 data is 6.2 per 100,000 of the world population. The following table is illustrative:

Between 2010 and 2014 the number of murders declined from 1683 in 2009 to 1005 in 2014, a decrease of 40 per cent - the steepest decline in any four-year period. Sadly, that advantage and momentum have been lost in 2015. At the time of writing, the Jamaica Constabulary Force Statistic Unit is reporting an increase in murders of 25 per cent for 2015 when compared to 2014. Bunting, speaking in Montego Bay in May, said this was just a "bump in the road".

The situation is compounded by an apparent lack of capacity by the present Government to craft strategies capable of controlling the crime crisis. This is evidenced by the obfuscating statements of the prime minister, the minister of national security and the present commissioner of police.

A government that does not understand the cost of crime to the national economy will continue to dream of economic growth and prosperity in an environment of bloodletting, where communities are under siege from rampaging gunmen, and both citizen and investor confidence are undermined as people harbor increasing doubt about the capacity and will of the government to ensure their security. Consider for a moment, how costly the intractable crime situation has been for us as a nation. The World Bank in its 2011 World Development Report estimated that Jamaica's economy would grow by 5.4 per cent if we were able to reduce our crime level to that of Costa Rica.

The corollary to that is that improved economic performance leads to a reduction in the level of crime. Our own experience validates that. In the latter part of the 1980s, when we recorded robust economic growth averaging 5.7 per cent between 1987 and 1989 (despite the effects of Hurricane Gilbert) The number of murders recorded each year was consistently under 450 or less than 20 per 100,000, this coming from the staggering figure of 889 in 1980.

The Government clearly does not understand this correlation. It has not been able to prioritise crime control and insulate it from the harsh austerity measures dictated by the International Monetary Fund (IMF) programme. The current budgetary provision for the Police Force is $30.3 billion compared to $27 billion in 2011-2012. When inflation is factored in, that represents a reduction in real terms of 15 per cent.

The capital budget is what creates public-sector investment, generates jobs and helps to stimulate private-sector investment and business activity. Properly targeted and executed, it has a multiplier effect, the velocity of which can make a huge difference in the country's economic performance. Under the current IMF agreement, capital expenditure was programmed to be $240 billion up to 2015-2016. The most recent IMF review indicates that this will be reduced by 60 per cent to just over $90 billion.

The Current National Security Policy for Jamaica, authored by Professor Anthony Clayton of the University of the West Indies, lists among the costs of crime to Jamaica the following: low life expectancy (most murder victims are between age 16 and 35), lifelong effect of injury and trauma with attendant costs of health care, fear and anxiety in the population, and emigration of skilled workers. Note must be taken of recent reports that more than 100,000 Jamaicans migrated between 2010 and 2013, many of them with skills acquired here that we desperately need. Added to that are the higher cost of doing business in a society plagued by gang violence, frequent armed robbery, extortion and thefts, business closures, the decline in property values, capital flight and the diminishing trust of the population in the State and its governance.

Just take a look around the city of Kingston and other townships, and you will see formerly thriving business establishments now reduced to ruins and derelicts, mostly due to the effect of violent crimes. Many shops, bars, restaurants, gas stations, and small business places have either been robbed or had citizens murdered by gunmen on premises.

Certain occupational groups such as bar and taxi operators have seen significant losses among their colleagues due to murders accompanying armed robberies. Many business persons have sold out, closed shop and migrated to countries where public security is a long-term government priority. Many have postponed expansion plans for their business as they watch to see whether the Government will take seriously the matter of public security through effective crime control. Families, on a daily basis, have to make or postpone important life decisions due to the fear and uncertainty presented by the current crime crisis.

The country's desire for economic growth and prosperity, the creation of jobs, which so many ambitious Jamaicans hope for, the surge in investment from both local and foreign entrepreneurs, the creation of legitimate economic opportunities which will retain our brightest minds here and attract talented Jamaicans in the diaspora to return home with their skills, will never be realised in an environment of insecurity and governmental apathy.

I appeal to my fellow Jamaicans to think seriously about the choice we make at the polls in the next general elections. The correlation between effective crime control, improved public security, improved economic opportunity for you and your families, and your dream of national prosperity is well established. It is evidence based. The stark difference in crime control and economic fortunes under the stewardship of the JLP and PNP are well known and documented. There is no reason in this day and age for us to be tricked into voting for either party. We have an opportunity to choose wisely, so fellow Jamaicans, when you vote in the next elections, consider your future and that of your children and grandchildren. You should use the opportunity to place some serious questions before those of us who come seeking your vote. Weigh their answers seriously and make sure they convince you of their ability and commitment to address your concerns, and their integrity to deliver on those commitments before you vote for your representative.

The apathy among voters is very high and therefore I expect the voter turnout to be the lowest ever in the upcoming general election. Among them are Jamaicans who have voted for the party of their choice or those who voted for both parties in previous elections. Whatever your choice on the day, I encourage all those who appear on the next voters' list to exercise their franchise to ensure that the government chosen will not be voted in by a minority but a majority of the electorate.