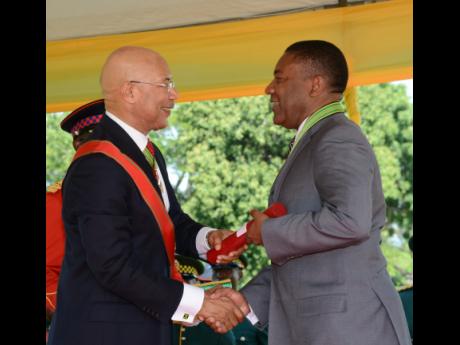 Ricardo Makyn
Sir Patrick Allen (left) congratulates Phillip Paulwell on his induction into the Order of Distinction, Commander class, at the National Honours and Awards Ceremony at King’s House on National Heroes Day.

On Heroes Day, I watched with bemusement as Phillip Paulwell displayed what looked like his best Hercule Poirot impression (David Suchet's version, NOT Peter Ustinov's) mincing his way to the King's House platform to accept his Order of Distinction.

Naturally, I saw it on TV. I didn't think I should venture on location for fear of possible collateral damage should lightning strike.

There's people who believe that what we're to receive is meant to happen anyway.

Then there're those who'll admit that they're literally scared stiff no matter what you say.

Then there are those who'll astound by simply being around to play.

Thunder and lightning ain't worth fighting so lock yourself away or else face it all tonight.

I asked the Old Ball and Chain, "Why?" She informed me there was a rule that automatically conferred this honour on any parliamentarian of 20 years' standing. Since that'd be a long-service award, I double-checked the OPM website, which proclaimed regarding the Order of Distinction: "The honour of the Order may be conferred upon any citizen of Jamaica who renders outstanding and important services to Jamaica ... ."

So Old BC must be wrong as, to qualify for OD, services must be "outstanding and important". Warming a chair and pounding a desk for 20 years don't meet the criteria. Furthermore, the announcement of Paulwell's award stated it was for "distinguished service to Parliament", thus confirming that any policy introduced to confer automatic Orders of Distinction for long service would be improper.

Phillip Paulwell's distinguished achievements are legion and fully deserving of this prestigious award. He was an early bloomer, because I recall when, on his watch as trade administrator in the early 1990s, the department was at the centre of an embarrassing scandal regarding alleged fraudulent importation of motor vehicles and a senior employee faced criminal charges. The scandal, like many that would follow, never touched him personally.

He was appointed commerce and technology minister in 1997. Four years later, Phillip Paulwell's distinguished service saw him unashamedly attempting to usurp the OUR's jurisdiction by purporting to instruct that regulator to abdicate its statutory role in the fixing of telecoms rates. In March 2002, he ignored all protocol, propriety or good governance by telephoning OUR Director General Winston Hay to tell him a fourth telecoms company was interested in coming to Jamaica, but only if certain rates remained unchanged. Establishing himself as one of the last of a dying breed of public servants, Hay told Paulwell to piss off.

So Paulwell issued a "directive" to Hay, who didn't flinch. He took his errant minister to court and the Court of Appeal and the Privy Council ruled that Paulwell had no authority to issue the directive.

That was one of Paulwell's many similar achievements that have found their way on to his Wikipedia page. Other similarly distinguished achievements considered substantial enough to make Wikipedia include:

"In 2001, Paulwell was at the centre of a controversial loan to NetServ, an IT firm which subsequently collapsed. Paulwell approved a J$180-million loan of public funds to NetServ without matching equity, and after a due-diligence report raised serious questions about the business conduct of the company's principal, Paul Pereira, NetServ, received a J$90-million cheque to enable it to carry out start-up operations. In February 2001, just before a second payment was due, JAMPRO ... sent two reports to Paulwell's ministry and the NIBJ raising concerns about the operations of NetServ/Pereira. However, the ministry's loan committee still decided to go through with the second payment ... ."

"Paulwell was at the centre of a telecoms scandal in 2007 after he noted that the sale of Jamaica's fourth cellular licence would go to ... Solutrea Jamaica Limited. Solutrea was to pay approximately US$7.5 million for the licence. However, when it became unclear whether Solutrea had paid in the full sum, it emerged that Paulwell had issued the licence without all the required public agencies agreeing to the sale."

These distinguished services would have been enough for most people's lifetime, but Paulwell wasn't done.

"The fiasco began when the Caribbean Cement Company (CCC) recalled 500 tonnes of faulty product released into the market. Industry and Commerce Minister Paulwell was accused of negligence and gross dereliction of duty ... . One accusation levelled at Paulwell was that despite recommendations from the Bureau of Standards, he failed to exercise his ministerial authority to declare that [cement] production must conform to the bureau's certification programme. Prior to its privatisation, CCC was under a certification programme ... . A US cable [published by WikiLeaks] stated that the fiasco nearly crippled the booming construction industry ... ."

The WikiLeaks cable also disclosed that the US Embassy/British High Commission told newly selected Prime Minister Portia Simpson Miller in March 2007 that they had deep-seated concerns about Phillip Paulwell and Tony Hylton as Cabinet members. The WikiLeaks cable read:

"The ambassador also encouraged Simpson Miller to select the best individuals available to serve in her Cabinet ... . As if anticipating the ambassador's unspecified concerns about Paulwell (and with Paulwell seated next to the ambassador), Simpson Miller specifically stated she hadn't yet decided who would be her national security minister. (Note: On March 13, the ambassador and British High Commissioner Jeremy Cresswell met to discuss mutual concerns over the possible inclusion of Paulwell in the new Cabinet and how best to raise the issue with Simpson Miller in their respective meetings. Cresswell, who met with Simpson Miller later on March 14, subsequently briefed the ambassador. Paulwell and Hylton also sat in on that meeting, he said, which similarly limited what he could say ... .)"

Despite US and British concerns, Paulwell, the first of only two PNP MPs to unreservedly endorse Portia in her bid to succeed P.J. Patterson as PNP leader, was made a member of Portia's first Cabinet and has remained there, more solid than any rock.

There's not a soul who'll stay out there and I don't think there will be tonight.

But we've got to accept what's right.

"Paulwell was at the centre of a scandal after it emerged that the Government accrued a bill of more than US$3.95 million for the distribution of four million energy-saving fluorescent light bulbs donated by the Cuban government ... . The matter was referred to the DPP and the Fraud Squad following allegations that Paulwell, then-minister of energy, industry and commerce, and Kern Spencer, his minister of state, awarded lucrative contracts for nationwide distribution of the bulbs to two companies only recently incorporated. A government investigation into the affair absolved Paulwell of any wrongdoing."

Kern Spencer was acquitted of criminal charges brought against him after a lengthy and contentious trial. Isn't it the most distinguished service to be at "the centre" of so many scandals without ever being touched by one?

Was it last November

when I got caught under a tree?

without so much as a stool

that I could sit upon to comfort me.

I shudder at the thought.

However, I got out safely.

Thunder and lightning ain't worth fighting so lock yourself away or else face it all tonight."

My favourite pop songwriter is Irish hermit Raymond (stage name 'Gilbert') O'Sullivan, whose 1874 iconic signature tune Alone Again Naturally is my personal anthem. O'Sullivan, who detested performing live, is credited with establishing the protection of songwriters' publishing rights against hip hop's proclivity for unapproved sampling when he successfully sued Rapper Biz Markie in 2001 for sampling Alone Again Naturally without permission. Thunder and Lightning, an obscure cut from O'Sullivan's first album, is a humorous ditty about people afraid of thunderstorms and neatly explains why the better part of valour kept me away from King's House on Heroes Day.

Wikipedia hasn't yet caught up with the EWI scandal. In what was probably his most distinguished achievement, Paulwell ignored local and international warnings and amended an OUR licence to facilitate the licensee's requests. The calamity that followed has been thoroughly documented, and Jamaica hasn't recovered.

Portia said of Paulwell at the height of the EWI scandal: "Unless he does something wrong that would affect and impact the Jamaican people in a serious way ... [I won't dismiss him]." His EWI missteps that kept energy costs astronomically high to this day don't qualify as "wrong" or seriously affecting "the Jamaican people". Of course not. It's "distinguished service".