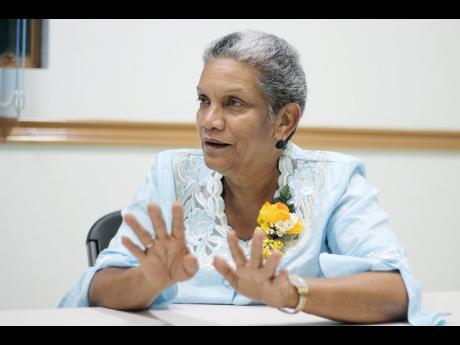 File
Arlene Harrison Henry, Jamaica's public defender, has been criticised by Ian Boyne for her stance on the St Hilda's head girl affair.

For St Hilda's High School, the only decent, sensible and just thing to do was to reinstate the young lady - which the board finally did last Friday after creating a big mess. Jade Bascoe was vindicated and the school did the right thing after its reckless blunder based on ignorance and poor judgement.

The principal had erred badly. If she had understood anything about Jehovah's Witnesses, she would have spared herself, her school and the Anglican community the severe public embarrassment.

Knowledge of unorthodox religious sects like the Witnesses would have spared her the most regrettable action of stripping head girl Jade Bascoe of her appointment after hearing that she used the name 'Jehovah' at a school devotion. Ignorant principal. She should have known that no practising Jehovah's Witness would have accepted the position of head girl in the first place. None. Anyone who accepts such a position knowing that it entails participating in devotions and civic ceremonies, even if that person bears the name of a Witness, is not going to be strict in following that religion's tenets.

I keep bemoaning the fact that people won't educate themselves on religion. Educators, of all persons, should not fall into that trap. Principal Heather Reid-Johnson bungled on so many levels. First, Jade Bascoe had served in other leadership capacities at school that required involvement in activities frowned on by Jehovah's Witnesses - proving unmistakably that she sees no conflict between whatever she professes and what the school demands.

For let us not be unbalanced in this discussion: It is not discrimination, but common sense to demand that if one is occupying a position, she must be able to fulfil the demands of that position. I understand the principal's insistence, which the public defender apparently is irked by, that no Jehovah's Witness can be a head girl at St Hilda's. For the public defender, that seems like stubborn victimisation. But if a head girl is to participate in devotions, work with fellow students to prepare them for ceremonies to sing the national anthem and possibly bow to the Queen, she can't be a Jehovah's Witness. Plain and simple. It is legalistic claptrap to call that discrimination.

There are certain positions for which conscientious objectors should not apply. If you poll young people who are practising Jehovah's Witnesses, all of them will tell you they have no interest in your head girl or head boy positions. You can keep those and other inducements of Satan's Babylon system.

As the school said in its statement issued earlier this month: "St Hilda's Diocesan High School believes in religious freedom," but "the head girl as the leader of the student government is required to perform duties supportive of the tenets of the Anglican tradition." Also, the school pointed out that as an institution operating under the Ministry of Education, "St Hilda's is required to participate in national and civic functions such as the Independence flag-raising ceremonies ... . The inability of a head girl to participate in these events because of religious beliefs would restrict and negatively impact our school's engagement with the wider community, of which it is an integral part."

In our zeal to protect civil liberties, let us not take leave of common sense and behave as though the St Hilda's principal is just an unrepentant bigot. She had genuine concerns and fears. But I maintain that had she thought through the issue soberly, she would have seen that those concerns and fears had no basis.

Note that according to the public defender, who conducted an investigation, on September 22, there was a devotion which the newly appointed head girl attended. It was there that the girl mentioned Jehovah's name. Now that should have told the principal that the 16-year-old was not a practising Jehovah's Witness. A devout, inflexible Witness would not be caught dead in that devotional exercise, let alone to be invoking Jehovah's name on such a blasphemous event.

Besides, the principal was told explicitly by Bascoe that she was not a Jehovah's Witness and she had no conflict in doing her head girl duties. The principal, according to the public defender's report, gave a foolish reason for being sceptical about the girl's sincerity. Hear it: "When specifically asked as to the reasons for Jehovah's Witnesses' non-participation in leadership roles, the head girl explained to the principal and her secretary that in kingdom hall, 'We are told that we are not to go for leadership positions because what you and other churches do is Satanic.'" Yes, that is precisely what the Witnesses do teach.

But listen to what the dear principal concluded from that: "The principal found that the use of the word 'we' by the head girl convinced her that the head girl had embraced the teachings of the Jehovah's Witness faith." Now tell me, the fact that the 16-year-old attends kingdom hall and reports with grammatical precision that "we" who are listening in the kingdom hall hear these things, does that mean everyone who hears is a member, let alone someone who accepts that view? What kind of reasoning is that - and from a principal?

What the principal also does not know is that Jehovah's Witnesses, unlike Evangelicals and Pentecostals, don't rush to baptise people. Typically, people study and attend kingdom hall for some time before being baptised. And there are many associated with Jehovah's Witnesses who are not actually Jehovah's Witnesses. So Jade Bascoe's situation is quite common.

But what if the principal fears that she might be converted to their religion? Isn't she right to make a pre-emptive strike by stripping her of the position? No, that is unjust. You can't take an action against me for what I might become in the future.

However, the public defender lacks nuance and is irrational in her report. She has a serious difficulty understanding what she interprets as the principal's recalcitrance that a Witness can't serve as head girl. "The principal was unequivocal in expressing that being a Jehovah's Witness disqualifies any girl from becoming a head girl and holding leadership positions ... . The principal explained that once a student is a Jehovah's Witness, that student is automatically excluded and disqualified from becoming head girl ... ." In the public defender's view, "The exclusion/

disqualification of girls from leadership positions based on their denomination is a discriminatory practice and has no place in our schools and in our democracy ... . Whether the child is or is not a Jehovah's Witness is of no moment."

How can it be of "no moment" if that child can't participate in devotions, flag-raising ceremonies and do other important duties disallowed by the religion? Don't be absurd, Public Defender. Jehovah's Witnesses effectively disqualify themselves from certain positions.

What the public defender must do is investigate cases of genuine discrimination that are taking place in other schools. I had to report one prominent high school to both the Ministry of Education and its denomination because I witnessed the trauma of a 17-year-old who was made to sit among delinquent graduands at the graduation ceremony simply because her parents refused to send her to rehearsal on a Saturday (their Sabbath). She went for weeks on other days and just because she missed Saturday, the school principal refused to let her march with fellow students or sit with them on the platform. She cried uncontrollably.

Now that is victimisation. (Fortunately, both the denomination and the Ministry of Education reacted with outrage.)

But our universities also victimise religious minorities like Sabbath keepers. There are faculty there who are bigots and need to be called out. The public defender needs to investigate those things, and we must be similarly repulsed by those occurrences.

I also believe that in certain instances, religious people must be willing to sacrifice for their religious convictions, rather than expect to be accommodated by secular society. You must, as the Bible says, count the cost of embracing your religion. Sometimes there is a price to pay.