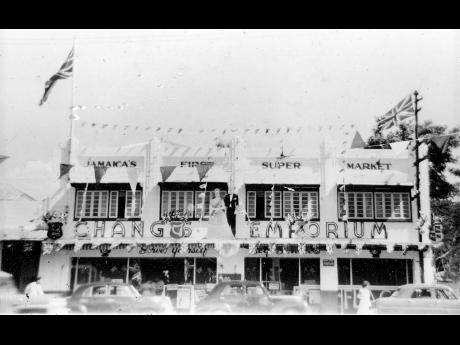 Contributed
Chang’s Emporium in the 1950s.

I don't know about you, but one of the ways I set my goals and measure my achievements is against certain timelines. Most of them marked by certain people's, mainly close ones', death.

For instance, when I was 10, one of my brothers died in a car accident. He was just 21 and was returning from a Byron Lee session in Old Harbour. He was not the driver.

Glen was quite popular, doing the social/party rounds and even attending Teenage Dance Party (TADP) sessions a few times.

When an older sister and I went through a chest containing his belongings a few years later, we found, in addition to his last pay packet with its criss pound and five shilling notes, a couple of letters from young girls asking, "Glen, when are you going to marry me?"

So I set certain targets I should reach by that time. I was determined to graduate from university by the time I attained the age of 21.

Just gone was the 42nd anniversary of my father's, Percy's, death. He died aged 67. He owned and operated Jamaica's (and the English-speaking Caribbean's) first supermarket. Chang's Emporium, 86 Half-Way Tree Road, established certain firsts in the retail trade. Opening on Sundays was just one of them.

Chang's Emporium was also the first to have a branch, establishing Stop 'N' Shop on Old Hope Road (above the Lady Musgrave Road intersection), in the mid-1950s, and its own branded products.

I have often wondered where a Chineyman, who came to Jamaica when 12, had the vision to open a self-serve supermarket and where he plucked the name 'Emporium' from. Cambridge defines emporium 'as a large shop that sells many different types of goods'.

When Poppa (or Pops or Percy) died, I was 22. So when people said that he died 'young', how could I appreciate that? After all, I had 45 years more to go. I had just completed the first year of my MBA, recently got married, and my (first) wife was expecting.

Well, believe it or not, that time is quickly approaching. I will be 65 early next year. Just a bit over 2 years till 67.

What have I attained? Sometimes I wonder. For when any one of my children start to nitpick or grouse when money is scarce and can't go around, I feel like screaming.

I have six biological and two adopted children. How does one treat different children with equity over time? How does one assess how much to give one versus another at any particular time?

How does one 'appraise' the contribution or effort one puts into bettering himself/herself and, therefore, the family?

Enough money is rarely available. And when it is, one child might need it. But when another needs it, you might not have it. Circumstances are not fungible (interchangeable).

Oh, the problems of a parent!

And Poppa had 15, 13 of whom lived to adulthood. The problems he must have had!

The Telegraph's headlines of October 14, 2015 was 'China's middle class overtakes US as largest in the world'.

Despite fears of a global growth slowdown in the emerging world, Asia is set to be the scene for the greatest expansion of the world's middle class, said Credit Suisse, in its annual wealth report.

The Swiss bank said with 109 million adults, "this year, the Chinese middle class for the first time outnumbered" that in the United States at 92 million.

While the number of middle class worldwide grew last year at a slower pace than the wealthy, it "will continue to expand in emerging economies overall, with a lion's share of that growth to occur in Asia," said Credit Suisse Chief Executive Tidjane Thiam.

China now accounts for a fifth of the world population, while holding nearly 10 per cent of the global wealth.

One of my company's branches on Spanish Town Road (near Three Miles) has been without ADSL service for more than nine weeks.

This is in spite of the fact that I have been speaking directly to FLOW's Doreen Smickle in Garry Sinclair's (the managing director's) office for more than five weeks.

The buck stops here. I cannot go any higher.

Yet I am still waiting to hear 'gunfire' in this regard. So much so that, in exasperation, I have now requested the line to be disconnected.

What is worse is that I have been seeing on social media a lot more horror stories about FLOW. Coupled with the loss (without compensation) of FLOW's 'free' movie channels, this does not paint a very pretty picture.

Every one of you is throwing away more than $500,000 every year. That is if you are a Digicel user, as approximately 75 per cent of you are.

Let's do some maths and some (educated) guesswork.

If just 75 per cent of those have these devices, that would mean that 1,572,416 Jamaicans have cell phones. And, if 75% of cell phone users are active Digicel customers that amounts to 1,179,312. (Digicel actually states that it controls 75% of the market, with its customer base around two million, but some double-counting may be involved in the latter).

Note that this figure doesn't include even one of those equally 'wasteful' Digicel faithful under 15 years of age.

Couldn't Digicel just give us (Jamaica) this money? Or is it just monkey money?