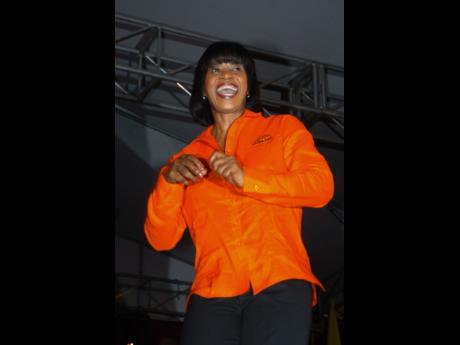 There won't be a People's National Party (PNP) meeting in Half-Way Tree tonight when it was widely expected that the trumpet would have been sounded for election roll call.

Half-Way Tree has become our Times Square (New York), Trafalgar Square (London), Champ ElysÈes (Paris), Revolution Square (Havana), Red Square (Moscow), where the nation meets to celebrate, to mourn, or to mark really big national events. It certainly can hold more people than the inflated 150,000 strong, which corked Sam Sharpe Square in Montego Bay for a Michael Manley political rally during the 1976 election campaign. That 150,000 strong that could not be wrong, but were?

The big national gatherings used to be downtown. The parties themselves were launched in the Ward Theatre at North Parade. And the big party meetings were held at Parade - the PNP's under Norman Manley's statue, the JLP's under Bustamante's. Before that it was Racecourse for big national events (now National Heroes Park).

The shift from the downtown heart of the capital city is a consequence of our tribal political history of violence and destruction, which powered the decay and decline of downtown.

Actually, the election date would be better announced in parliament as it is a prime ministerial prerogative and not that of the party leader, although both are generally the same person. It certainly would be much cheaper. But that would kill all the drama and excitement, which is so much a part of our political culture. The drama and excitement, the bussing of people up and down the country, the boisterous roadblock meetings may be a good party for the parties, but these things don't really change election outcomes.

The PNP general secretary has loudly indicated that there won't be an election in the Christmas season, that is, any time after Christmas Day, December 25, and up to January 6. With a 21-day period between announcement and polling day required in law, and assuming that Christmas eve, the 24th, is also ruled out, and the EOJ's preference for an early-in-the-week election on a Monday or Tuesday is ruled in, the prime minister has up until the first of the month to fly the gate for a pre-Christmas December election.

The tension of anticipation, heightened by media speculation, may be great theatre but can really do nothing now to improve the prospects of the incumbent Government.

There really is no 'good' time between now and the end of the life of this parliament in December 2016 for the prime minister to call the election, her last, to her party's advantage. In fact, things can only get worse from here on. Hence the pressure for an early election with a full year to go in the life of the Government. The economic reform programme backed by the International Monetary Fund (IMF) is biting, a measure of its 'success'. And like Churchill, the government may win the war but lose the election.

The country has passed 10 quarterly IMF tests without a miss. The dollar has substantially devalued, which the economic managers say is the right direction for increased competitiveness. But these economic victories have imposed pressure upon the people and unbalanced their lives as the books are balanced.

The last straggling unions in the protracted public sector wage negotiations, including the very vociferous police, have caved in and are signing on to that paltry seven per cent wage increase over two years after six years of wage freeze. The public service is poorer and angrier.

Voter turnout has been progressively declining since peaking at 87 per cent for that decisive 1980 general election when there was the biggest ideological clash between the political parties and the greatest level of political violence. In the last general election, at which hundreds of millions of dollars were hurled in the highest election spend ever, just over half of the registered voters scrambled out to the polls a mere 53 per cent. Many other eligible electors opted not to register to vote at all. Although picking up 42 of the 63 seats, the PNP won only very marginally in many of these.

The Electoral Office of Jamaica has reported "overwhelming" registration for the voters' list in the final week before the September 30 registration cut-off date for the list to be published on November 30. By then, election was in the air. Some EOJ offices had to extend opening hours to accommodate the last-minute rush. That registration rush should ruffle the ruling party. Jamaican voters vote out incumbent governments more than how they vote in alternative governments. The 'sweep dem out' broom is as much a part of the political culture as is the stageshow roadblock public meeting.

The 2007-2011 JLP government was the first one-term government in the political history of the country since 1944. It is too early to tell if a new trend is emerging. The people had imposed their own checks and balances on the two parties by alternating them in government after two parliamentary cycles. Then along came PJ Patterson, master political organiser, smashing up that tidy arrangement and delivering three consecutive electoral victories, on top of Michael Manley's rebound one of 1989, to give the PNP four terms, 18 and a half years in office. The electorate, weary of the PNP in office, marginally voted them out in 2007 despite the unreadiness of a JLP hurting from internal disorder. The JLP won 32 seats, several of them very marginally, with 49.98 per cent of the votes, while the PNP took 28 seats, with 49.35 per cent of the votes.

Success always has its downside. Patterson's unprecedented victories may have turned the electorate against long stretches in office, stretches of even two terms. And, all over the world, escalating expectations and disillusionment over delivery are turning electorates in democracies quickly and sharply against governments. Shorter terms, lower margins. This rising phenomenon of escalating expectations with early onset disillusionment has serious implications for governability and governance. But that's another story for another time. It's a big one. And our political scientists are not paying sufficient attention.

Despite the recranking of the low-end JEEP, the promised jobs, jobs, jobs have not materialised. The governing party will have to face the polls with the albatross of the health sector crises around its neck. Shifting Fenton Ferguson from the Ministry of Health is only a short-term aspirin palliative for public anger. Crime, indexed by murder, is resurging. The people have grown much more intolerant of corruption (by others) and are searching for it everywhere.

We are going into this imminent election with the long overdue campaign finance reform bill before the parliament. But it obviously won't get out in time.

The government side of the current parliament has signalled, through the Leader of Government Business Phillip Paulwell, its intention to break with tradition and reject an ECJ recommendation for the state financing of political campaigns as part of a basket of critical measures to reduce corruption in politics and governance. The measure is not popular. For the same reason, no government has moved to build a new parliament building or a new prison despite the pressing need for both. The prison could be a retirement home for some politicians!

Paulwell's logic is loose, his fear unfounded. The lack of immediate people support for this prudent anti-corruption proposition is no cost to the PNP as public ire would be equally directed against the JLP, cancelling out short-term political fallout. The people are increasingly against corruption.

In effect, the PNP is rejecting the decision of its own two appointees to the ECJ. The ECJ operates by consensus with two reps from each of the political parties and four selected independents. Its decisions are, therefore, bipartisan, umpired by civil society, exactly what we say is necessary to lift the country above the obstacle course of raw, dirty party politics and move it forward. The ECJ has brought us, and guaranteed us, clean and peaceful elections from the bad old days.

The prime minister and her governing party have been revving the election engine up and down the country. There's no backing off from an early election now - not if the PNP hopes to hang on to credibility and win.