The hot issue of climate change 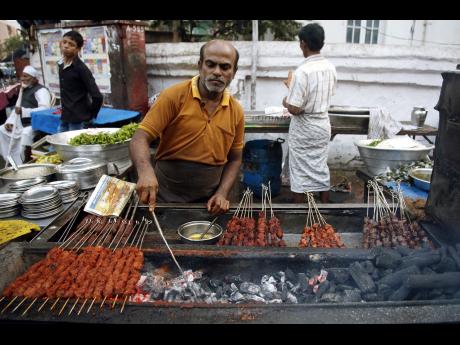 AP
AP A man grills meat delicacies on a traditional coal grill in Mumbai, India, last Thursday. An Indian delegate at UN climate talks says India will be able cut back on its carbon emissions if money is made available to boost renewable energy in an envisioned climate agreement in Paris.

One of the largest meetings of world leaders opened last week in Paris as nearly 200 countries began a two-week conference looking at the issue of climate change.

It is an issue that cannot be overemphasised. Jamaica is among those small island developing states that are gravely affected by climate change, both in terms of our vulnerability to natural hazards and our water woes and environmental degradation. As with so many other global issues, inequality and injustice are at the heart of this issue, as is the urgency of development funding from the developed countries.

And between the last major climate conference in Copenhagen in 2009 and this one, the Forbes list of billionaires with interests in fossil fuels increased from 54 to 88, with their combined personal fortunes swelling by 50 per cent - moving from US$200 billion to US$300 billion. As Oxfam urges, "Governments in Paris need to stand up to their influence and stand up for their citizens the poorest, lowest-emitting and most vulnerable among them first and foremost if Paris is to deliver an agreement for those who need it most."

The effects of climate change are not just reflective of inequality between nations but within nations. You know that poor people in our own inner cities and rural areas in Jamaica, for example, suffer more from floods, hurricanes and environmental decay than the middle class. And women bear the heaviest burden locally and globally.

The issue of climate change again highlights the importance of coordinated global action and the limitation of the market model. Markets can't solve all our problems and we can't take a purely market-driven approach to all our problems. Our global commons cannot be left to the vagaries of the market. The commitment made at Copenhagen to commit US$100 billion a year to help developing countries adopt technologies and processes to reduce emissions and mitigate climate change must be implemented.

The United States is not going to accept legally binding decisions in Paris, while Europe continues to press for that. But developing countries must go for what's possible and must press for agreements that will put the developing world in a better position. China, as a growing global power and as the world's biggest polluter, must play its part and stop its shadow-boxing, though it has been correct to point out the hypocrisy in the developed world, particular from Right-wing forces in the United States.

The majority of the world's richest 10 per cent of emitters are in the developed countries of the Organization of Economic Cooperation and Development (OECD), with a third from the US itself. While total emissions in China on a per-capita basis are above those in the European Union, the per-capita lifestyle consumption emissions of the richest 10% of Chinese are estimated to be considerably below their richest OECD counterpart. India is also well below Europe's level.

This issue of climate change, though, is no mere rich-versus-poor, North-versus-South issue. It is an issue that threatens all who share a common planet. And it is as much in the interest of the rich North as it is in the South to deal decisively with this matter. As President Barack Obama said soberly in Paris as he addressed the conference this past week: "I believe, in the words of Dr Martin Luther King Jr, that there is such a thing as being too late. And when it comes to climate change, the hour is almost upon us." Fourteen of the 15 warmest years on planet earth have occurred since 2000, and this year is set to be the warmest ever.

Globally, more than 100 million people live less than one metre above sea level. US National Security Adviser Susan Rice was almost apocalyptic in her address to Harvard University in October. "Climate change will affect national defence. We've got military installations that are imperilled by the same rising seas as our civilian infrastructure ... . We face spreading diseases and mounting threats to global health. Already, more mosquito-borne diseases are spreading from the tropics to temperate zones as climates warm. Viruses like West Nile and chikungunya are growing more prevalent in the United States. India is currently in the grip of the worst dengue fever outbreak in years. Livestock diseases are expanding northward into Europe." As she pointed out, these diseases are costing billions of dollars to treat.

Remember, too, that climate change deepens poverty and insecurity and is, therefore, a breeding ground for terrorism and state failure. A Stanford University research group showed that a rise in temperature is linked to a significant increase in conflict. Rice pointed out in that same Harvard address that prolonged drought in Nigeria contributed to the instability and dissatisfaction that fuelled the Boko Haram crisis. And the genocide in Darfur was, in part, a drought-driven conflict. Syria experienced its worst drought on record just a few years before civil war broke out there. That drought forced farming families into cities, which increased unrest.

The interdependence of the world has deepened and ecological changes are among the most impactful globally. We can't be nonchalant about the environment, and gone are the days when we could have the luxury of thinking that issues of climate change are just for pie-in-the-sky, utopian environmentalists who want to take us back to the Stone Age. We have to face the inconvenient truths.

Fortunately, the climate-change deniers have lost the ideological war and are increasingly being consigned to their counterparts of the Flat Earth Society. People and governments are making changes. The rallying cry has been sounded and many are heeding. Last year, that insightful progressive journalist, Naomi Klein, author of the internationally acclaimed best-seller The Shock Doctrine: The Rise of Disaster Capitalism, came out with her poignant book, This Changes Everything: Capitalism vs the Climate.

She cut to the heart of the issues very early. "It seems to me that our problem has a lot less to do with the mechanics of solar power than the politics of human power specifically, whether there can be a shift in who wields it, a shift away from corporations and towards communities ... . It is a civilisational wake-up call, a powerful message ... telling us that we need an entirely new economic model and a new way of sharing this planet."

One of the finest expositions on this issue of climate changes, putting it in just the right philosophical, political and cultural context, is Pope Francis' encyclical, Laudato Si. It is a brilliant critique of the Western paradigm of progress. In a statement that strikes at the heart of laissez-faire capitalist ideology, Pope Francis says: "Politics must not be subject to the economy, nor should the economy be subject to the dictates of an efficiency-driven paradigm of technocracy.

"Once more, we need to reject the magical conception of the market, which would suggest that problems can be solved simply by an increase in the profits of companies or individuals. Is it realistic to hope that those who are obsessed with maximising profits will stop to reflect on the environmental damage they will leave behind for future generations?"

President Obama addressed essentially the same thing in his Paris speech: "But if we act ... now, if we place our short-term interests behind the air that our young people will breathe ... and the water they will drink and (their) hopes and dreams ..., then we won't be too late for them." But that's a big if, for Western society's values are inimical to that long-term view. It is hedonistic, atomistic and consumeristic and, therefore, short-sighted.

Tackling climate change requires a shift in values and philosophical outlook. Happily, there is growing recognition that things have to change.World leaders in Paris are merely catching up with what has been taking place through the work of progressive intellectuals and activists.

- Ian Boyne is a veteran journalist. Email feedback to columns@gleanerjm.com and ianboyne1@yahoo.com.