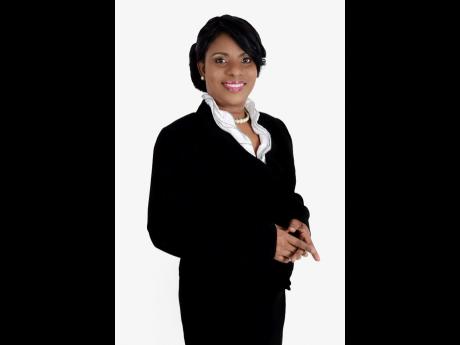 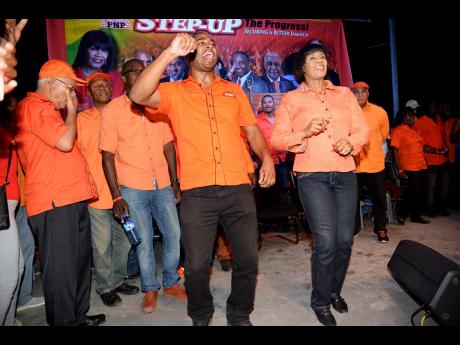 Jermaine Barnaby
FILE Prime Minister Portia Simpson Miller is joined by Hugh Buchanan in a celebratory jig on stage in St Elizabeth oon November 22. She has opted not to call a general election for 2015.
1
2

"On your marks!", then "get set!" were basically the soundings from Prime Minister Portia Simpson Miller a few months ago, which placed the country in election mode. The main political parties ramped up their campaign activities and candidate selections were on in earnest: Room for Rent Apply within. Then boof! Dem get kick out, leaving dem in a tailspin. The guessing games then began as to when the prime minister would 'fly di gate'. It must be by December 17, after that it, will be too late.

Governance had gone on go-slow and private-sector leaders had expressed their disquiet with the mystery surrounding the date of general election, as such uncertainty was "bad for business" and the wider economy.

The current status quo allows for the manipulation of the political system and gives an incumbent government a political advantage over its opponent, as the prime minister will only fly di gate if the polls are deemed favourable to the Government. In a modern democracy, something as important as an election date should not be left to the whims of a prime minister or her 'Master's' touch.

All this has brought forcibly to the fore the need for a fixed election date. This has been a long-standing position of the Jamaica Labour Party (JLP). In 2008, then Prime Minister Bruce Golding sought to get the appropriate bill drafted, but based on advice, a fixed election date could only become a reality after sections 64 (2) and 65 (2) of the Jamaican Constitution, which are deeply entrenched, are put to a referendum.

There are clear advantages to introducing a fixed election date. For example, it removes uncertainty, allows for better planning, and brings stability to the economy and society. Director of Elections Orrette Fisher has also opined that a fixed election date will allow the Electoral Commission of Jamaica (ECJ) to better manage the electoral process and more efficiently manage its scarce resources.

Another advantage is that it would eliminate waste. Election was in the air. Now, poof, it disappear! This has resulted in approximately $20 million of taxpayers' money going up in smoke for retraining of temporary workers. Mr Fisher has stated that the ECJ is still tallying the total cost of preparing for this delayed election. Whatever it is, the loss is one our country can ill afford.

There is cynicism from some quarters about a fixed election date ever becoming a reality. Jamaica's current political culture thrives on manipulation and placing a party's interests above those of Jamaica and its people. Therefore, there is the view that political leaders enjoy the power so vested in them to fly di gate and, therefore, would not want to give that up.

The concern has also been posited that with the introduction of a fixed election date and the requisite constitutional amendments, it would not be possible to remove a prime minister or government by way of a no-confidence motion, if either is found to be in breach of the required constitutional obligations, corrupt or acting in any other manner that is detrimental to the country and people.

The United Kingdom (UK) has a fixed election date of the first Thursday in May every five years, as a result of the Fixed-Term Parliaments Act 2011. Section 2 of the act allows for elections to be held before the end of the five-year cycle under the following conditions: i) a motion of no confidence is passed in the government (not prime minister), by a simple majority and 14 days' elapse without the House passing a confidence motion in any new government formed; and ii) if a motion for a general election is agreed by a two-thirds majority of the total number of seats in the House of Commons, including vacant seats.

The JLP had indicated, in its fixed election-date proposal, that it would accommodate variations only in special circumstances, which could possibly seek to address the concerns.

It was as a result of a Conservative-Liberal Democratic coalition agreement following the 2010 general election that led to the Fixed-term Parliaments Act in September 2011. In Jamaica, such an act would require constitutional changes, where both of the main political parties have to cooperate to achieve a two-thirds majority in both Houses of Parliament, to effect this. Is this possible?

Former UK's Deputy Prime Minister Nick Clegg, on debating the bill in the House of Commons, said that "by setting the date ... our prime minister is giving up the right to pick and choose the date of the next general elections ..." Is Prime Minister Simpson Miller willing to give up the right to fly di gate and instead fix the date?