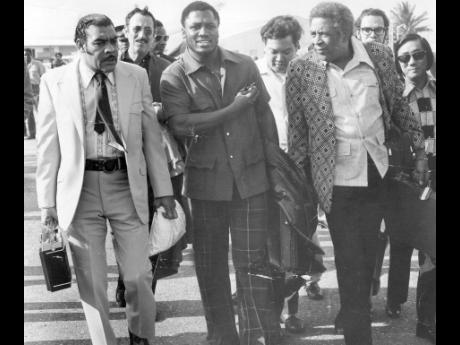 It's 'official'. No surprises. My sources say Supreme Ventures Limited (SVL) will be named preferred bidder for CTL. Apparently, the other bidder failed the funding test, or, better put, Goliath was always able to promise more funds than David. Goodman's Law triumphs again. I'll continue to track this story over the next few months as horse racing enters a new era and SVL tightens its grip on a Jamaican gambling near-monopoly.

Now for 2015's biggest surprise: I agree with 95 per cent of Orville Higgins' December 18, 2015 analysis ('WICB not to blame for failure') especially:

"... The real reason the West Indies are struggling so badly in Test cricket is that the average West Indian boy is no longer as passionate about the game, as was the case in the 1970s and '80s."

I excuse Orville for omitting the 1950s/'60s, when the great teams of the '70s/'80s grew up playing cricket in West Indian backyards, streets, lanes, parks and beaches until all hours of night until mothers insisted they stop. Then, we 'watched' cricket on the radio and imitated our cricketing heroes when we played. Every West Indian boy had this experience.

There was no TV, computer, Internet, digital distraction. Homes were hot and claustrophobic. Fun was outside. This was important because the cricket-playing Caribbean has only five million people, versus 21 million in Sri Lanka; 24 million, Australia; 53 million, England; 182 million, Pakistan, and 1.25 billion, India. To compete, we need passion from every West Indian child.

But the WICB contributed significantly with its policy of victimisation and crackpot selection (In which universe can Jason Holder, a cricketer of immense potential but still a child, captain the West Indies Test team and bat No. 7?). With the numbers against us, we can't afford WICB's attitude.

Leroy Brown's tribute to the late, great Lucien Chen concentrated, albeit not exclusively, on his exploits in boxing.

Lucien was truly larger than life. He was one of a rapidly dwindling type of Jamaican - a character. Fearless, flamboyant and creative, there was only one Lucien. Flair was his modus operandi; innovation his best friend; and courage his driving force.

Born into abject poverty, he worked his way out of that misery in his early days as a pool hall hustler. I first met Lucien in the 1970s around a bridge table. He was, by then, a huge success (owning and operating his own high-end nightclub on Knutsford Boulevard called House of Chen) and tales of his swashbuckling

Lucien was an above-average bridge player with an intensely competitive spirit, so he wasn't averse to using his resources to retain 'professional' partners like Morty Nelson or Don DaCosta to ensure victory. To this day, Don DaCosta remains the finest card player I've seen. If Donny was your partner in a rubber bridge game, you were guaranteed riches. By the time we met, it was already legend that Lucien, playing with either Donny or Morty (sorry, Alzheimer's), had defeated world-famous pair Charles Goren and Helen Sobel in a high-stakes game at House of Chen.

Lucien's motto was "always live like a millionaire, even when you're broke". He lived his motto to the hilt. Many times in his volatile life, Lucien faced financial disaster, but the supreme gambler always bounced back. He was an intuitive gambler who operated a seat-of-his-pants philosophy and often scoffed at nerds with their 'systems'.

Lucien never forgot from whence he came and habitually helped the 'small man'. He was a frequent visitor to Casa Tout in the 1980s and 1990s. Whenever the complex's gate man opened up for him, Lucien would tip him $500 (the equivalent, over the period, of US$50-$100+) for his trouble. When leaving, another $500 was tipped. He believed in kindness and generosity, plus it was his way of living large in accordance with his motto.

So famous was his prowess at tipping that the story is told of two limousines simultaneously pulling up in front of Caesar's Palace, Las Vegas. Out of the first limo stepped Frank Sinatra. Out of the second stepped Lucien Chen. Every doorman and bellhop ran to help Lucien, leaving Frank alone to carry his bags.

Lucien's exploits as a boxing promoter have been chronicled by Leroy Brown, but his behind-the-scenes involvement in the Sunshine Showdown (January 22, 1973), where his lifelong friendship with Prime Minister Michael Manley was integral in convincing the Jamaican Government to outbid Madison Square Garden for the fight, isn't so well known. In that fight, relative unknown George Foreman humiliated previously undefeated heavyweight champion 'Smoking' Joe Frazier to win the title. I was ringside for that seminal moment in world boxing history as it unlocked the door to the staging of big fights in Third-World countries. In particular, it inspired Don King, who famously came to Jamaica as a member of Frazier's camp and left the ring in Foreman's, to promote the 'Rumble in the Jungle' in Zaire and the 'Thrilla in Manila'.

ESPN's Nigel Collins wrote about Lucien's involvement in the Sunshine Showdown on its 40th anniversary:

"... According to historian Christopher James Shelton, Alex Valdez, who had promoted Frazier's European singing tour, was granted Joe's permission to negotiate his next fight. Valdez teamed with Jamaican bookmaker and promoter Lucien Chen ... and convinced the Government of Jamaica, through local attorney Paul FitzRitson, to bid for the fights.

"Chen, with whom I spent a good chunk of time during my stay, is a fascinating character who also dabbled in producing movies (one of which, The Marijuana Affair, featured Bob Arum in a supporting role as a drug kingpin). Chen was too busy promoting [Simon] Brown's fight [with Jorge Vaca] to talk much about Frazier-Foreman, but, when he did, it was always with a twinkle in his eyes, as if he knew something I didn't. I have no doubt his

persuasive powers and local connections were major assets in pulling it off ...without Chen's involvement, the Foreman-Frazier match might've landed at the Garden and lost its tropical flavour."

Lucien Chen was an important contributor to horse racing's development and popularity during the 1960s-1990s and, as always, he put lots of his money where his mouth was as racehorse owner and bookmaker.

In partnership with boxing promoter Jacques Deschamps and V. Chin-Loy, he won the 1966 Derby with SKA (ridden by Kenneth Mattis and trained by R.A. 'Bobby' Hale) and, in the 1970s, imported some quality European bloodstock, the best of which was probably Calejucam (bred in Great Britain by Watergate out of the Stardust mare, Theme Song), who won six races in 1972 up to A1, including the Joseph Ashenheim Memorial Bowl. This led the way for purchases of other British-breds and raised the local product to new heights.

Gene Autry remembered Lucien to me as follows:

"I remember him as being high profile in everything he did, as a boxing/entertainment promoter, horse racing/bookmaker, bridge player (he would hire the best available partner) playing in all the major world championships. As a world-renowned gambler, Caesar's Palace would send a private jet to collect him.

"What stands out most in my memory about him is that he was a very heavy tipper. Everywhere he went, people were tripping over themselves running to his beck and call because of his tips. I remember one year, Lucien, Don DaCosta, Sam Mahfood and myself went to play in a high-profile bridge tournament at the Sheraton Bal Harbour in Miami. The rooms were US$330 per night and, in those days, poor Gene Autry couldn't muster even US$30 per night.

"So, I checked into Rosa's Guest House in a nearby downscale district which offered accommodations for US$9.99 per night. The facilities matched the price. Lucien felt the team shouldn't separate, so they all checked in with me. Imagine Lucien Chen (the darling of Caesar's Palace) staying at Rosa's for $9.99 per night? The staff members were rude and disobliging, but, within the hour, big-tipping Lucien had the manager herself running out to buy his cigarettes, drinks, newspaper, you name it. It was like that wherever he went."

Rest in peace, my friend. You WILL be remembered.

By the way, Dwayne Vaz, don't think I've forgotten about you! Until you do the right thing, I'll be repeatedly reminding you and Jamaica of your witting or unwitting incitement of vicious political violence.

Serial apologies won't cut it. Sincere apologies are delivered on spot or very soon thereafter. If you don't believe me, ask Steve Harvey. When you've sincerely atoned; when you show you understand the damage you've done to the decades-long struggle against political violence; then you can wheel and come again as a rehabilitated future leader. Now, you're no leader. You're a follower.