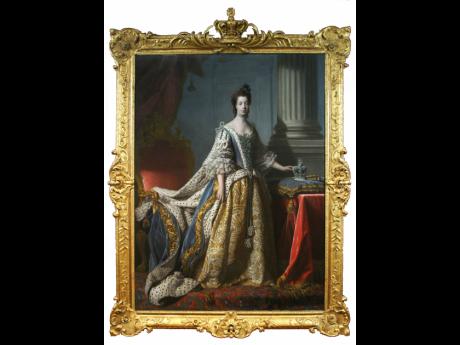 Queen Charlotte, wife of the English King George III (1738-1820), was directly descended from Margarita de Castro y Sousa, a black branch of the Portuguese Royal House. So says Frontline (in a piece researched and written by Mario de Valdes y Cocom) in their series, 'The Blurred Racial Lines of Famous Families'.

"Six different lines can be traced from English Queen Charlotte back to Margarita de Castro y Sousa, in a gene pool which, because of royal inbreeding, was already minuscule, thus explaining the Queen's unmistakable African appearance."

While it was expected that portraits would downplay the negroid features of the Queen, it so happened that Scot, Sir Allan Ramsay, was the artist responsible for the majority of the paintings of Charlotte and thus, it may not be surprising that his representations of her were the most decidedly African of all her portraits. For as circumstance would have it, "Ramsey was an anti-slavery intellectual of his day and he married the niece of Lord Mansfield, the English judge whose 1772 decision was the first in a series of rulings that finally ended slavery in the British empire".

On the other hand, it has been noted that of all the painters who depicted Charlotte, the evidence shows that Sir Ramsay was the most accurate portraitist of them all.

rallied around portraits of Queen Charlotte (who founded Kew Gardens and after whom Charlotte, North Carolina, is named) and the fight for the abolition of slavery. Queen Charlotte's decidedly African features seemed so incongruous to the sumptuous garbs and rich surroundings she is normally portrayed in as to be "outstanding".

As Queen Charlotte had 15 children, 13 of whom lived to adulthood (just like my own mother), The Guardian posits in a piece titled, 'Was this Britain's first black queen?' by Stuart Jeffries:

It is a great 'what if' of history."If she was black," says the historian Kate Williams, "this raises a lot of important suggestions about not only our royal family but those of most of Europe,

considering that Queen Victoria's descendants are spread across most of the royal families of Europe and beyond. If we class Charlotte as black, then ergo Queen Victoria and our entire royal family, [down] to Prince Harry, are also black ... . A very interesting concept."

Already there are signs that the Chinese yuan/renminbi is set to become that reserve currency.

There are some that say that the 'volatile' nature of the Chinese economy, recently, might undermine such forecasts.

Yet, one needs to examine what has China's growth rate been and put it in context.

The lowest quarterly growth rate was an annualised 3.80% in the fourth quarter of 1990. It has never gone negative during this entire period.

The Chinese economy grew an annual 6.9% in the third quarter of 2015, slightly down from the 7.0% expansion in the previous quarter, but narrowly above market expectations. (Source - National Bureau of Statistics of China)

The US economy expanded an annualised 1.5% in the three months to September of 2015, lower than the 3.9% expansion in the previous period and below market expectations. (Source - US Bureau of Economic Analysis)

What does being a reserve currency mean to a country (United States)?

From Wikipedia, the free encyclopedia:

"A reserve currency is one that is held in significant quantities by governments and institutions as part of their foreign exchange reserves. The reserve currency is commonly used in international transactions and is often considered a safe-haven currency.

The world's need for dollars has allowed the United States government as well as Americans to borrow at lower costs, granting them an advantage in excess of $100 billion per year."

It, therefore, makes Washington's Financial Currency War on China: The Eclipsing of the US Dollar by the Yuan, written by Mahdi Darius Nazemroaya of Global Research, August 31, 2015 even more relevant.

"The Chinese are in the process of

displacing the monopoly of the US dollar. They are dropping their US Treasury bonds, stockpiling gold reserves, and opening regional distribution banks for their own national currency.

"This will give them easier access to capital markets and insulate them from financial manipulation by Washington and Wall Street.

"Fearing the eclipsing of the US dollar and the Bretton Woods system by a rival financial architecture (the Asian Infrastructure Investment Bank - AIIB) the US response has been an attempt to damage the Chinese markets and increase the value of China's currency.

"China has responded through regulations in the market and then quantitative easing of its currency to maintain the low prices of Chinese manufactured goods and exports."

What would occur if the dollar were replaced as the world's reserve currency?

One scenario is that countries holding the dollar might sell. If the larger nations sold most of their supply of dollars at around the same time, the market would be flooded with dollars, which could cause its value to fall, thus causing inflation to spike.

FS Insider's Monty Guild (with Tony Danaher) wrote on October 5, 2015: "This reality is one of the reasons that the new AIIB has won so many participants, even as the US and Japan put enormous pressure on their allies not to join.

"It is clear to all that it is in China's economic interest to help its neighbours develop and that means bootstrapping the essential infrastructure to help them accelerate growth.

"China also wants to be the dominant power in its neighbourhood, and although it has done its share of sabre-rattling in the South China Sea, it is also pursuing 'soft power',

"The Asian Infrastructure Investment Bank (AIIB) is one major manifestation. It also represents a step in China's strategy to increase its clout in global, not just regional, financial marketseventually hoping to challenge the dominance of the US dollar and of western institutions in the world's financial architecture."

While reports of the USD's demise may be greatly exaggerated, the Chinese yuan should be strong enough to be an alternate reserve currency.