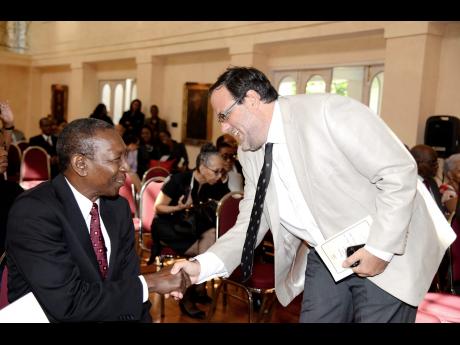 Jermaine Barnaby
Minister of Justice Mark Golding (right) welcomes Justice Dennis Morrison as acting president of the Court of Appeal following his swearing-in ceremony at King’s House on August 24, 2015. He has since been confirmed in the post.

Prime Minister Portia Simpson Miller made some powerful utterances for justice at last Monday's swearing-in ceremony for Justice Dennis Morrison as president of the Court of Appeal.

Others spoke, including the governor general, the leader of the Opposition, the chief justice, and Justice Morrison himself, but Mrs Simpson Miller is the head of Government, head of Cabinet, and the second most powerful budget officer after her Minister of Finance.

Justice reform needs resources. When the functions of government, everywhere and every time, is boiled down to 'run dung', the core responsibilities of any government are law and order, public safety, justice, and not-for-profit public infrastructure which nobody but the state will provide.

In an election year - and justice does not win votes - the prime minister has loudly and boldly "committed the Government to continuing the implementation of a wide-ranging programme of reform of the justice system during 2016", an OPM news release advises.

"This process, she has noted, requires a change of the culture and approach of key stakeholders, supported by significant public investment. Despite taking place during a period when Jamaica is continuing on a path of sustained fiscal discipline and economic reform, the prime minister says key changes in the justice system must be made to ensure the swift, efficient and effective delivery of justice for the people of Jamaica."

Leader of the Opposition Andrew Holness, in his speech at the swearing-in, concurred.

As a longstanding advocate of the preferential resourcing of justice as a core obligation of Government, this takes my breath away!

Both political leaders made the connection between justice, peace and prosperity. The leader of the Opposition said he was happy that on the first working day of the new year, the national focus was on the justice system.

"We should take it as a signal," he said, "that this is the year when we focus on the justice system, because access to justice is such an important part of achieving prosperity."

The prime minister concurred, emphasising that "justice is essential for the existence and maintenance of peace, while peace is required for prosperity. A cohesive society is the fundamental platform on which investments are attracted and sustainable economic growth is built. A cohesive society requires that our people believe in their hearts that the system provides them with access to justice when they require it."

Finding the resources for the "significant public investment" which justice requires is not nearly as difficult as may be imagined, even "during a period when Jamaica is continuing on a path of sustained fiscal discipline and economic reform".

The problem is that Government has come to see its primary responsibility as economic manager and not the classic core functions of law and order, public safety, and justice. A critical part of the required change of culture and approach of key stakeholders which the prime minister spoke about for justice to flourish is a cultural and philosophical shift on the part of Government itself about what its primary duties are.

The prime minister is asking us to believe that her "administration continues to pursue Jamaica's national development goals on the premise that our justice system must be treated as a central area of development-policy action".

"That is why," she said, "we are determined to invest in justice for our people, and build a justice system that is efficient, accessible to all, and of the highest quality."

Well, another budget cycle is coming up soon. Money talks. Louder than any prime minister. Justice Minister Senator Mark Golding will tell you that the Ministry of Justice is grossly underbudgeted. We'll see if the next Budget and the prime minister are talking the same talk.

The prime minister is telling us, the leader of the Opposition agrees, that justice - as well as law and order and public safety for life, person and property - is an economic issue. These core functions of Government underpin education, health, agriculture, commerce and all other economic sectors, youth, labour, all other sectors of government. A small 'tax' on these sector budgets to underwrite the costs of improving law and order, public safety and justice would yield high dividends for all.

A relatively painless 2.5 per cent slice of this year's Budget of $640 billion (to pick a small percentage for illustration) would yield an additional $16 billion for improving law and order, public safety, and justice. This would not be an insubstantial increment to National Security and Justice when you look at their actual allocations for the year, and for some crime-reducing social development interventions. National Security was allocated $51.8 billion this Budget year and Justice $6.8 billion. We would be looking at a 27 per cent topping-up of the combined budgets.

The actuaries at Finance can fiddle with the percentage slice of the Budget for minimum pain and maximum gain. It is the principle of preferential resourcing of core state functions that I am arguing.

Admitting the failure of Government to deliver on justice, from the process of self-government began in 1944, culminating in Independence 53 years ago in 1962, the prime minister told the Morrison swearing-in audience "that the Jamaican people have been crying out for justice from the time of the arrival of our ancestors on slave ships hundreds of years ago, and that cry continues in various ways today. It echoes in almost every sphere of life whenever our people feel that they are being treated unfairly".

Lavish praise was heaped by all upon Justice Dennis Morrison, QC, and his distinguished track record at the private bar and then in the state judicature. The prime minister was full of sympathy, as is characteristic of Mrs Simpson Miller, and gratitude for the overworked appellate judges.

Much more than sympathy and gratitude is needed. When Justice Morrison was sworn in as acting president of the court last August, he made a passionate plea for more judges.

"I simply must, out of a sense of duty to my colleagues and to the court, reiterate the urgent amelioration in the condition in which the court is expected to function, particularly with regard to the related matters of the number of judges and physical space," Justice Morrison had said in a news report then.

There are seven appeal court judges, with a projected need for at least 12. We won't bother to mention the dire need for judges in the resident magistrate's courts at the base of the justice system.

Better justice simply needs more judges, more courtrooms, and more court staff. It cannot be sweet-talked into being. The prime minister, in her stellar speech for justice, noted the " large volume of cases that come to the courts every day".

I don't yet know Justice Morrison's stance on the Caribbean Court of Justice (CCJ), but his predecessor, Justice Seymour Panton, was very much a CCJ man. Morrison's praised acumen further firms up in my own mind the feasibility of a Jamaican final court of appeal.