Ian Boyne: Can this cabinet do it? 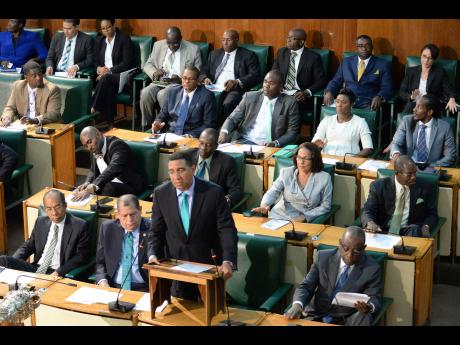 Jermaine Barnaby
Andrew Holness and other members of the Government.

Not so long ago, some people were saying that Andrew Holness had no team to put together a credible Cabinet. Today, many are saluting him for what they see as his sagacious mix. What they should not overlook are his skills at political tightrope walking, which he displayed in his selection - and non-selection. It was his first major leadership test. And he passed handsomely.

Andrew made space for some of the key power brokers in the party, while ensuring that the national interest was not compromised. It was an excellent juggling act. He had to find ministerial posts for Samuda, Henry, Shaw, Smith, Spencer (though of state), Chuck, Vaz, Grange and Montague. Pearnel did not make it, but his son did and he got Speaker of the House. There, the prime minister waxed eloquent, recalling Pearnel's "long, dedicated and distinguished service to this beloved country, from fighting for the rights of labour to being imprisoned, to now Speaker".

Whatever the real politik that Andrew Holness had to answer to, it can't be denied that it coincides with the public good. I reject the now common and accepted ageist prejudice that people like Karl Samuda, Mike Henry, and Olivia Grange should be parked simply because of age. That's nonsense! Henry understands transport and will do well. Samuda lives and breathes industry and commerce and has been involved in farming. He has a sharp and creative mind and is highly respected by the business class. He mastered the computer long before many of us who were much younger than he was. (I was his press secretary under both JLP and PNP administrations).

Bobby Montague is the right man for national security. He is street smart, tough and has very strong interpersonal skills, contrary to what people who don't know him think. And he is no wild-eyed partisan. Bobby knows how to work compromises. I am sure he will be collaborating with former Minister Peter Bunting, who did an excellent job in giving that ministry strategic focus. Bobby must continue that strong Unite for Change programme and continue the holistic, integrated approach to fighting crime that Bunting brought. His will be perhaps the most difficult portfolio.

I hope we finally learn our lesson that crime is a national problem, not a problem of either the PNP or the JLP. People still kill people for simple things like water in a cell phone, whether PNP or JLP is in power! Bobby will have to depend on the work of his prime minister, who has growth and job creation; Shaw in finance; and, critically, Ruel Reid in education, information and youth - a masterstroke in both ministerial choice and ministerial structure.

Reid must now play a major role in executing those fine things Andrew Holness said about personal responsibility in his inaugural. He is the right man to do it. A deeply spiritual and decent man, with an impressive track record of achievements in education and leadership, Ruel must restart the values and attitudes programme in a big way. He must reach children and young people, using information to build character in them. He must use both state media and work with commercial media to build social capital and fix our culture.

I am heartened that his first public pronouncement has been about focusing on strengthening parenting and family skills and using agencies like the Jamaica Information Service and the Public Broadcasting Corporation to help in that crucial effort. The minister can't afford to drop the ball on this. His predecessor, Ronnie Thwaites, did an excellent job as minister, and I am sure Ruel will do no less. Young Floyd Green should be of significant help and will have enough opportunities to show his mettle.

Chris Tufton, if he has leadership ambitions, has no choice but to do well at health. He has no margin for error. He has come in at a difficult time and right after an election had to be postponed because a predecessor health minister had, in the eyes of the majority, messed up in what has been called the dead babies scandal. Our health challenges are beyond any minister of health, but Chris had better start to learn the miracle business if he wants a fruitful political career.

Daryl Vaz is the right man for the prime minister's Ministry of Economic Growth and Job Creation. People who don't know Daryl don't know his skills in clearing bottlenecks and getting things done. He's Mr Fix It. He has strong connections with the business class (his father is a former minister of industry). Daryl is a people person, a worker, a no-nonsense person, who is a study in perseverance. He's in the right place.

Kamina Johnson Smith, our first female Minister of Foreign Affairs and Foreign Trade, is not just affable, amiable and stately, but articulate and bright. She will be a fitting representative of Jamaica. She must ensure that the progressive positions which Jamaica has taken internationally and which has distinguished us in the international community are maintained. I hope she will continue to press for changes in the international financial architecture; for more development funding; for reforms of the International Monetary Fund, and for a change in the World Bank's classification of middle income countries, which shut offs countries like Jamaica from certain concessionary arrangements. Foreign Affairs is a very important ministry in this age of heightened globalisation. That's why Kamina is a good choice.

Desmond McKenzie, one of our most successful mayors, will do well, I believe, as minister of local government. Wheatley, too, I expect to do well. I have looked at his party's manifesto points for his portfolio and if they were developed by him, then his head is in the right place.

I have no serious concern about any ministerial appointment and it is a good thing that we have a smaller cabinet and that we are saving $40 million from this. A few lives can be saved from that.

I have concerns about some persons who have been left out of the PNP Senate, though. Leaving out Imani Duncan-Price and Damion Crawford is a blunder. I understand the political dynamics, yes. Damion is a loose cannon. He might not be a willing participant in the follow-the-party-line game. But once you have others there who are eager participants in that game, you can afford to have a Damion. The PNP needs that progressive voice, especially with Andrew taking over traditional PNP space in that area. Damion is sharp and is a first-rate communicator. He understands some very crucial issues. We need that voice in the Senate.

Imani, too, should be in this Senate. She is too energetic, passionate, bright, avant-garde and gender-sensitive to be left out. She has much to contribute. I hope that mistake will be rectified by having her in the shadow cabinet. I don't believe in this youth-for-youth sake popular argument, but Imani is not just another young, pretty face. Damion Crawford is not just hip because of his locks and ability to shell dung nightclubs around the world. Find spaces for them in the shadow cabinet, Madam Leader of the Opposition.

The importance of the prime minister's focus on growth came home forcefully to me two weekends ago when I was reading the recently published book (2015) The Great Surge: The Ascent of the Developing World by development specialist Professor Steven Radelet. It is a gripping account of the extraordinary transformation of the developing world.

Hear this: Between 1977 and 1994, 51 developing countries recorded negative growth. However, since 1995, only 10 countries - only 10 - have recorded negative growth. You know which country is one of the 10? Yes, Jamaica. The others are Burundi, Central African Republic, Democratic Republic of Congo, Eritrea, Gabon, Guinea-Bissau, Madagascar, Haiti and Zimbabwe . Me feel shame. I see what Andrew is saying about the urgency of growth.

The last administration did an excellent job in preparing the foundation for growth. But now we have to go for growth itself and, for God's sake, leave that group of economic laggards and tek shame out a wi face.

n Ian Boyne is a veteran journalist working with the Jamaica Information Service. Email feedback to columns@gleanerjm.com and ianboyne1@yahoo.com