Patria-Kaye Aarons: Teams must learn how to lose 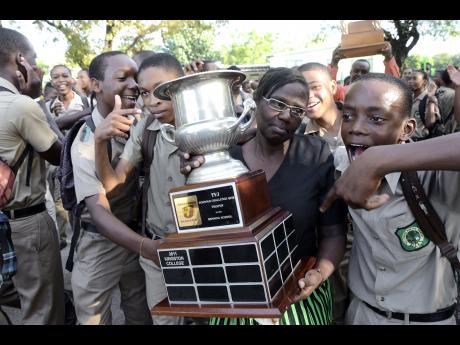 Rudolph Brown
Calabar students celebrate winning the Schools’ Challenge Quiz trophy in 2012. Referring to the controversial powwows over the Kingston College-Campion and Camperdown-Ardenne matches in the 2016 edition, columnist Patria-Kaye Aarons says high-school teams need to learn how to lose with grace.

Who would have thought that an unfavourable end to a high-school competition would have coalesced so many of Jamaica's brightest minds and stirred up such venom in people? The situations in question seem to have escalated to a level not even the intervention of the Dispute Resolution Foundation can help.

Kingston College heavyweights have taken to both social media and the threat of legal action to defend an instance in which they feel their beloved alma mater was wronged. And you know the force of Fortis doesn't let up. The matter surrounds a two-point defeat by Campion College (my beloved alma mater) in the quarter-finals of this year's TVJ Schools' Challenge Quiz. A similar complaint has been mounted by Camperdown High School against the media house, going as far as seeking an injunction from the Supreme Court that the competition be halted.

Having been present myself at several live shows, and a watcher from home like most, I, too, would have seen outcomes I didn't agree with in previous years. More than once have I thought an answer correct and still the points were not awarded. I would not have been such a stickler for pronunciations with the children, and would have given a pass to any answer that sounded even remotely close. But that's my personal opinion.

I am not a judge. And in all competitions - debates, sports, quizzes, beauty contests, etc. - participants are made aware, "The judges' decision is final." That, I believe, should be upheld and respected.

Absolutely, at some point, all students must be taught to not be pushovers and stand up for themselves, and what they believe is right. However, this isn't the ideal situation for that lesson. The outpouring of intellectual "nuh fret, we going to defen' it" from, perhaps, well-meaning adult supporters sends the wrong message to the students about how to deal with perceived injustice.

"... Schools would attend matches with previously written and presigned letters to challenge the outcome of matches, just in the event they do not secure the results they desire." Lunacy!

The students may have lost the match, but it is the adults who are the failures. Invariably, because of the way the matter is being handled, the students are now being taught a slew of lessons perhaps that were not intended. Lessons like:

- Always be prepared to challenge authority.

- Only accept a loss if you believe you lost.

- Whining and crying can be effective ways of getting what you want.

- Try intimidation and public shaming and see what happens.

I remember being involved in organising a primary schools' debate competition once, and the team that lost behaved deplorably. Correction: the coach for the team that lost behaved deplorably. After the winner was announced, three already sad primary-school girls had their spirits further broken by a coach who just couldn't lose with grace. He was so caught up with protesting the result that he completely missed the opportunity to comfort his team and congratulate them on a job well done, regardless.

Not winning, in any competitive arena, can perhaps be one of the biggest teaching moments for our young people. As adults, we have a responsibility to teach them to lose graciously, and that the end result isn't the only thing that matters.

Were the shoe on the other foot (as it has been in the past), and Campion suffered an unfair defeat, my argument would be exactly the same. Dear complainers and protesters, feel proud that your teams did their best when representing your schools. Congratulate and console them and keep it moving. We don't always get our way. Welcome to life.

- Patria-Kaye Aarons, a Campion alumnus, is a television presenter and confectioner. Email feedback to columns@gleanerjm.com and findpatria@yahoo.com, or tweet @findpatria.