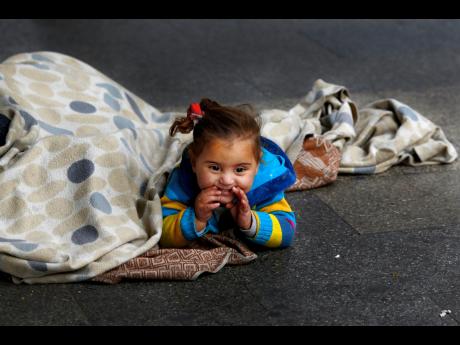 AP
In this February 10 photo, a Syrian refugee girl lies on a sidewalk in Beirut, Lebanon. A study published last year by the International Labor Organization, UNICEF and the Save the Children charity organisation found there are more than 1,500 children living or working on Lebanon’s streets, nearly three-quarters of them Syrian. 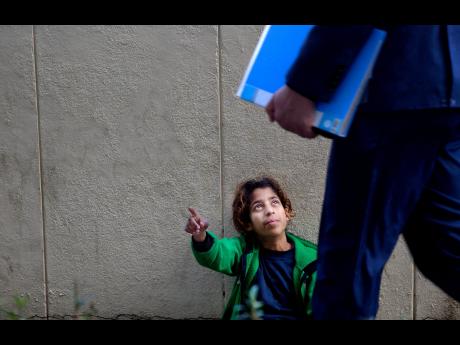 AP
In this March 16, 2016 photo, a Syrian refugee girl begs for money on a sidewalk outside a hospital in Beirut, Lebanon. It is one of the most visible signs of the refugee crisis that has put an immense strain on neighbouring countries and destabilised Europe.
1
2

I will leave the 'Man a Yard' and others to work out the details of the $1.5-million tax deal. So hopefully after they retreat, it is expected that there will be no surrender except to good reasoning.

True, I am truly embarrassed that either the outgoing People's National Party had milked the coffers and simply left no money where it should have been, or Finance Minister Audley Shaw had tunnel vision and was peering too deeply in the wrong place.

Whichever way, as the fat man who had his finger on the pulse of everything economic would have said, "Haste makes waist," and we must hold our breaths and open our eyes, lest the hurriedly thought out scheme be recklessly implemented.

Mark you, if the gap between promise and policy is as wide as some of the erstwhile issues in the health sector, not even the reclassified nurses who got their committed multiplication of their salaries during his first ministerial stint can help the economy convalesce.

Nonetheless, while they figure out how to turn theory into practice, the public-sector unions burn and Beijing smiles because of the anticipated toll revenue, someone suggested that when we need money, we might not have to go to the Far East in filling the budgetary gap.

Doubtless, the Chinese, who don't celebrate Lent, and hardly hold on to their Buddhism as official religion, must have taken the entire Easter season working out the kinks as to how to avoid losing as many millions as they have unemployed Chinese on the mainland. No! It is not time yet to bail from the junk or worry about getting shanghaied. But China has issues of its own and cannot be seen as our new saviour.

Well hidden in another newspaper, a member of the public suggested that Jamaica should get in touch with its DNA and open its arms to the myriad Middle Eastern refugees displaced by the conflicts in Syria and Iraq. In the view of this writer, there are millions of professionals who have had to run from their war-and ISIS-torn countries and are now homeless and nationless.

Recalling the original wave of immigration about a century ago, he noted that these persons of Arab and Islamic descent have made major contribution to nation-building in all spheres. Many of the Jamaican versions of the Arabic names do not sound, and are not spelt quite like the original, but there are many.

While it is true that the economic impact of this ethnic group has been solid and far-reaching, and we really appreciate it, the success story of the Arabs in Jamaica is not a simple one of them pulling themselves up by their own bootstraps. Rather, not only was Jamaica a refuge for them, but the colour-ranking system emanating from the plantation legacy facilitated their integration in the middle and upper-middle classes. Thus, banks and other institutions, which interestingly had the accumulated pennies of the black majority working class, made capital not as difficult for them to access.

However, don't tell me that I am using a Trump card, but like Mr Hair Force One, I would not support an unfiltered immigration of Middle Easterners in Jamaica, and it doesn't matter if the individuals are family members or rather close relatives.

The first problem is that we have never had an open-door policy to people of sub-Saharan African descent. When Haitians fled from mortal danger, we did not welcome them with open arms. So, then, if it is a selective immigration policy where we target only the professionals and those with caches of money, maybe we are on to something.

Jamaica offers one of the most tolerable places for brown to off-white people to live. Once landed, their status gets a bump up, because in Jamaica, unlike the USA and the UK, Arabs are white here. Second, this same plantation legacy, along with just plain sensibility of the leaders, has led to such peace and harmony between Jews and Islamic peoples that this is the only country where controversial Nation of Islam leader, Louis Farrakhan, could have gone into a synagogue and worshipped.

Rich Syrians, without a trustworthy environment and the constant threat of ISIS, could conceivably give Assad story, resettle here and experience what true democracy means. Not to mention that the women there will live in a country with one of the best 'status of women' profiles in the world. This would be the second Arab wave, and this time, they could bring their own money.

Yet, blood is not as thick as ideology, and Islamic extremism has no economic status. I'm sure Uncle Sam would get nervous if a raw set of Syrians would settle so close to the USA. After all, this is not Belgium, or the rest of Europe, where ISIS only has to cross the Mediterranean Sea. All that is needed is one woman with a strap-on bomb for a major incident to touch American soil. Oh by the way, did anyone notice that since January, Islamic extremists have killed around 200 Africans, between, Somalia, Cote D'Ivoire and including 86 people, including children, burned to death by Boko Haram in Nigeria?

- Dr Orville Taylor, senior lecturer in sociology at the UWI and a radio talk-show host, is author of 'Broken Promises, Hearts and Pockets'. Email feedback to columns@gleanerjm.com and tayloronblackline@hotmail.com.