Orville Taylor | No labour parties, only Labourites and Comrades 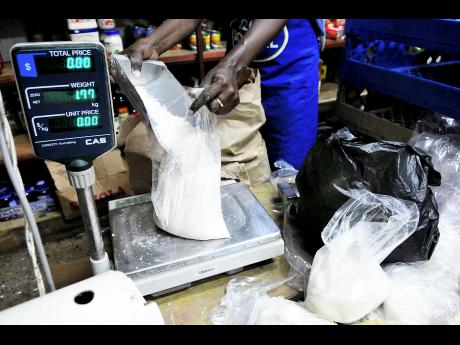 When we were teenagers and young men, the idiotic factions from the Jamaica Labour Party (JLP) and People's National Party (PNP) would work on different days. It might sound silly, but the 'Labarites' would grudgingly engage in projects approved or recommended by the socialist PNP Government and the so called 'socialis' and ''Comred' (most couldn't spell it) would work on May 24. Yes, they were that ignorant because labour meant JLP and they could not endorse anything that contained the word.

For their part, the JLP activists were just as dumb as doornails. And if they forgot the adage and became choosers while begging, you had better give them five $1 bills or a combination of Paul Bogle on the $2 bill and the 'Busta'. True, just like the partisan showing on the most recent nomination days when they, two tribes use 30 pieces of Sangster or three pieces of Joshua, the foot soldiers had no clue.

Yet, the saving grace for that period was that there were two sets of parliamentarians who were fighting for the rights of workers. Inasmuch as the JLP took the 1960s for granted and handed the working classes to the PNP, Hugh Shearer had finally awakened from his slumber and pushed two bills. These two became the pillars of industrial relations for the next 30 years as the Employment Termination and Redundancy Payment Act (ETRPA) and the Labour Relations and Industrial Disputes Act (LRIDA). Counterbalancing each other, Michael Manley, the charismatic frontrunner for most of his life, had his nemesis in the persona of his cousin, Shearer. They were backed by fist-clenching Comrades from the two PNP unions and the JLP had its Bustamante Industrial Trade Union (BITU).

Behind Manley were Clive Dobson, Lloyd Goodleigh, Las Perry, and a cadre of intellectuals who would make many pretentious lawyers or executives eat humble pie in negotiations. They had a more reserved but ever-present Navel Clarke from the Union of Clerical, Administrative and Supervisory Employees (UCASE) in the Senate. Indeed, the National Workers' Union (NWU) was explicitly set up in 1952 to be the labour arm of the party, and even the Trades Union Congress (TUC), with Senator Hopeton Caven, was an auxiliary. The NWU, unless the last set of power brokers in the party changed it en route to their road map to electoral failure, has full voting rights like a super delegate in the party.

Though headed by Shearer, the BITU was run by the literally larger-than-life Lascelles Beckford, who, at 300 pounds and counting, was not an easy opponent to get around. Call it a shameless pun if you wish, but a young Dwight Nelson was more than a dark horse in the stable; he also literally shadowed 'Becky', along with Pearnel Charles, Cliff Stone, Rudyard Spencer, and others.

Contrary to popular beliefs, the majority of disputes brought by the unions were not wage negotiations, and most of them did not result in work stoppages. Unions were seen as relevant because the leadership was visible and made sense. There was constant discourse regarding the legislative and policy/procedural changes which were needed to further enfranchise the working class. The unions had frequent polls to determine bargaining rights and the Ministry of Labour was kept busy.

This is not nostalgia, and I never look back to find the good old days. Good whole days are here in front of us, and there is a lot to do. Assuming that the afterlife is not what pastors imagine, Manley, Shearer, Becky, Dobson, Caven, and the myriad labour leaders who fought for workers' rights after Bustamante, Norman Manley, and Thossy Kelly in the post-1952 period must be writhing in their graves over what has become of their legacy.

Today, tens of thousands of workers are labouring under disguised contracts, where they are bona fide workers but are given uniforms, strict hours of work, tools, and everything that says that they are workers, except a lying employer. And Government and the Opposition know this. Union membership is at an all-time low, and despite the amendment to the LRIDA in 2010, which gives access to the Industrial Disputes Tribunal (IDT) to non-unionised single workers, one has to be a worker not a contractor to take a matter there.

Manley's PNP seemed to have forgotten him, and even his foundation is just that a foundation and facade but a non-funded edifice. Indeed, for the first time since 1952, there is no NWU or UCASE officer in either of the Houses of Parliament. And never mind the University and Allied Workers' Union's (UAWU) Senator Lambert Brown; he has no locus standi in the party as union arm, although he could easily take the place of the two PNP union heads by himself.

And despite Nelson disappearing and blending into the shadows, the BITU's president general, Kavan Gayle, is a big man in the Senate, keeping the tradition. Furthermore, Spencer is in the House of Representatives and the Ministry of Finance. Topping the list is the most powerful man in parliament, the indefatigable Charles, bedecked in his anachronistic wig that got soiled on the Ark. Now, the JLP has more labour leaders in its labour party.

Nevertheless, will this mean a more labour-sensitive government? Its $1.5-million tax break has ignored those already below the $592,800 threshold, and unless Audley Shaw is as accurate as he was in 2008 when he said that the global economic crisis will not affect us adversely, the recent devaluation to US$1:00=J$125:00 will make us froth before we catch wind of it.

Trade unions have typically ignored the lowest categories of workers. Can the parliamentary unionists keep Shaw honest and hold him to no more new taxes? Can some miracle work against the historical evidence that devaluation invariably makes local and imported goods more expensive?

And tell me that the economics book, and research are wrong, that without increased productivity and growth, more money in the hands of lower -middle and middle-class workers won't make the price of flour and salt fish more expensive. Dig up the bauxite research and see what happened to agricultural workers when that happened in the 1960s.

Tomorrow is Labour Day. What can the workers expect?