Orville Taylor | Well said, Andrew, but we still a ‘tikya’ 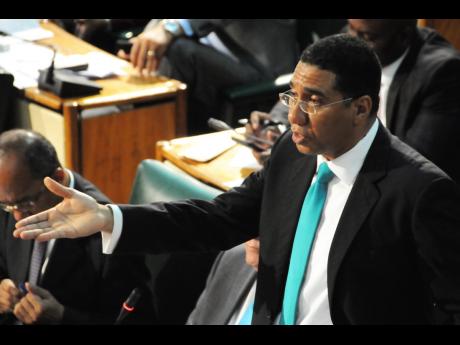 Some critics were as flat-footed as an old-time policeman chasing a little boy into a Chinese-owned shop, but Prime Minister Andrew Holness' Budget presentation last week was impressive, despite some areas of concern. There have been two-hour presentations in the past, but the large speech is nothing at which to snub one's nose.

True, he has inherited some programmes from the People's National Party (PNP), such as the one-stop electronic registration of businesses, the generation of employment in the business processing outsourcing sector, the use of information technology in job creation, educational transformation, among others.

However, it is hard to knock him when the International Monetary Fund (IMF) has not poured cold water on his fanciful tax package and the post-facto thinking in raising the threshold. Furthermore, thinking on his feet with uncharacteristic swiftness, he pulled the imagery of Usain Bolt running away from his rivals on the final leg, while they remained literally anchored with a Philips-headed screw in astonishment.

Whether it works or not, he addressed growth strategies and indicated which sectors he expects the economic boom to come from. Say all you want about the intention of making Jamaica into an international maritime centre. For three years, we heard from the last administration about the logistics hub but nothing concrete was ever presented. Indeed, the only sound that reminded us about the Goat Islands was that the discourse was in the month of 'May'.

Now, Holness has mentioned a well-advanced commitment from a German firm to set up dry-dock facilities. With Kingston having one of the seven best harbours in the world and our logistical proximity to the United States, there is no reason why this shouldn't have been on the agenda years ago.

Of course, I am nervous over the US$270-million revitalisation of the train service, because it will certainly railroad the existing agreement with the toll owners and we might have to pay millions in compensation out of the speculated earnings from any economic activity it stimulates. And although a PNP idea, I cannot rubbish the plan to convert garbage into fuel. And making the most of the 'ishen' and other nutraceuticals is a great idea, long advanced by my colleagues.

Imagine having a burgeoning seafront like the Malecon in Santo Domingo and Havana or even Fort Lauderdale, Miami Beach and South Beach. Add that to the commitment from Shahine Robinson, St Ann North East member of parliament (MP) and minister of labour and social security and I see good signs. Irked by the complaints of inaccessibility of local craft vendors to the tourists who arrive by cruise ships, she has declared that she will be addressing this anomaly.

Regarding our large and underutilised craft market downtown on the waterfront itself, I can finally see how a Malecon and a transformation of the downtown area into a sort of Riviera would help tens of thousands of small-craft producers. Micro, small and medium-size enterprises are the engines of economic growth globally. And, if the Government, with the necessary support to and from the police, says, 'zero tolerance' to harassment of tourists, and undisciplined vending, the benefits will be transformative. It should be noted that although we do not spread this fact enough, our crime-against-tourist rate is one of the lowest in the world.

Speaking of which, given that our most niggling crime, he has to be commended for increasing the capital part of the national security budget and his commitment to augment the number of mobile police stations, police officers being trained, motor vehicles and bikes. In this I also read a serious upgrading of the facilities under which Officer Dibble works. After all, unsuitable barracks have long been chinks in the armour of the boys in black and blue. He will have to seriously deal with police lockups as well.

Nonetheless, Holness and Security Minister Bobby Montague must tread as carefully as if stepping on egg, coconut or spent shells. Both must remember that they were MPs when our version of 9/11 took place in the last week of May 2010. Indeed, it was 'Labour Day', because it was when the staunchest and most dangerous supporter of the JLP gave the Labourites their comeuppance. It was their Jamaica Labour Party (JLP) that made the major contribution to our Corruption Perception Index (CPI) reaching a record low of 30, when it engaged a foreign law firm to snag the wheels of justice.

This came right after we had the highest number of murders in Jamaica's history, more than 1,690 in 2009. Moreover, in the first 10 months of the JLP's tour of duty, which began in 2007, an unprecedented 16 members of the security forces were murdered. And the cops know where the majority of killers came from.

Our police need the assurance that this dark period of our history, though recent, is as far behind us as the opportunity of a former prime minister to regain control of Gordon House. Anything that looks remotely like political interference, even if the tint is mint green, must be shunned and spurned.

Inasmuch as it looks like a helping hand, the proposed trampling on the constitutional rights of innocent-until-proven-guilty accused is ill-advised. Bail is not a privilege; it is an entitlement unless other factors militate against it. And never mind the fact that the police teams usually get it right when charging suspects for murder, there are occasions when they get it wrong. Remember, police personnel and licensed firearm holders do get charged for murder, too, not because they are guilty but because they have cases to answer. Mandatory sentences are dangerous grounds, too.

Nonetheless, Holness seems to understand that the 37 per cent of homicides linked to domestic/neighbourly conflict are connected to issues of low social protection, poverty and lack of housing stock, and, of course, the family.

Doubtless, I need to see more, such as worker protection; and appointing Bruce Golding to re-evaluate CARICOM is as wise as asking a Muslim to examine Jamaican gay rights.

Yet, Holness still gets two thumbs up.