Gordon Robinson | Who wants to root out crime? 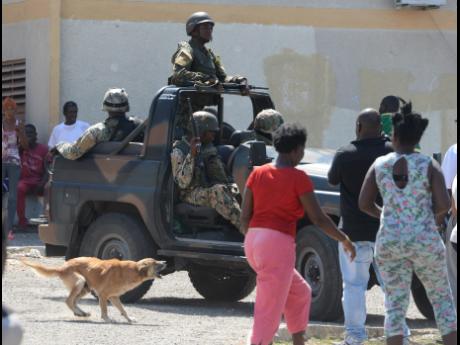 I am a terminal nuisance, especially as it relates to the English language.
I believe we inherited some good from our colonial slave masters, including the Queen’s English. It’s a challenging mixture of nuance, complexity, contradiction and precision. I love Patois (Patwa). But in today’s global village, if we don’t learn English and nurture Patwa as a tourist attraction, we’ll wither and die on the vine of global trade.
Still we insist on getting the English language wrong. For example, we don’t understand the difference between ‘legend’ and ‘icon’, so we keep calling Usain Bolt a legend. But, strictly speaking, legends are dead. The word ‘legend’ describes somebody like Wyatt Earp or Rhygin. Their lives, through exaggerated storytelling over time, become more folklore than reality.
Bustamante is a legend about whom stories become more and more apocryphal:
“Busta [to a cheering crowd]: Who is your leader?
Crowd: You, Chief!
Busta: Who give you work?
Crowd; You, Chief!
Busta: Who give you bread?
Crowd; You, Chief!
Busta [a trifle carried away]: B-R-E-D, bread?
Crowd [now delirious): You, Chief!
(Sangster whispers to Busta, “Yu fahget de ‘a’, Chief”)
Busta: B-R-E-D-A, bread!”
Never happened. But it’s part of the Bustamante legend.
Thus, English gave us the expression ‘living legend’. Every now and then an icon is spoken of with such awe and admiration that, even while alive, his/her extraordinary contributions attain legendary proportions. Miss Lou was one such.
In journalism, we have a living legend in Fae Ellington (Aunty Fae to us, whippersnappers). Those of us old enough to remember the brilliance and professionalism of young Fae Ellington at the University of JBC doing ‘The Bamboo Lounge’ and then ‘Morning Ride’, despite every imaginable adversity, aren’t surprised she grew up to be the Matriarch of Jamaican Journalism. She’s one of a kind, talented, compassionate, dedicated, fluent with the spoken and written word, equally adept in English and Patwa, and knowledgeable in Jamaican music history. Aunty Fae is top-class in all.
So, when Aunty Fae engages the likes of me on Twitter and asks for my take on an important global issue, what choice do I have? This is how it began:
Fae: “What is at the root of violence across the world? Hate or insanity? Or does one fuel the other? @cnni @BBCWorld @djmillerJA Research needed.”
Me (with trepidation): “@FaeEllington @cnni @BBCWorld @djmillerJA Aunty Fae, u figet. Ongle Jahmekyan patois (oops patwa) ave a wud fi di combo. Dat wud? HINSANITY!”
Fae: “@TheTerribleTout @cnni @BBCWorld @djmillerJA Gordon, with all that's happening across the world I have thought about this time and again.”
Me (more confident): “@FaeEllington @cnni @BBCWorld @djmillerJA I'm sure Hinsanity is the product of a more fundamental formula: INSECURITY+DOGMA-EDUCATION = HATE.”
Fae: “@TheTerribleTout @cnni @BBCWorld @djmillerJA I'm with you Gordon. But seriously, where does mental illness come in? #Hate”
Me: “@FaeEllington @djmillerJA Ppl who commit atrocities usually sociopathic not mad. Add2much dogma&they believe they can make their own rules”
Fae: “@TheTerribleTout @djmillerJA Gordon, so could personality disorders be the real culprit? You remember Freddie Hickling's findings?”
I do indeed.
I’ve been writing forever that we’re tackling violent crime as if we don’t want a reduction. Crime must be tackled at its root, and crime detection is more important than solving crime. I’ve called for a modernised police force, including comprehensive computerisation; proper training in IT and lateral thinking, and modern surveillance equipment.
I make bold to say that violent crime will NOT be reduced by more patrols, curfews, action squads and draconian legislation. Not now. Not ever. NEVER! Just being alive in 2016 is a thinking person’s occupation and21st-century solutions are all technology driven.

In 2011, Freddie Hickling and Vanessa Paisley conducted a scientific study that found a 40 per cent personality disorder rate in Jamaica (highest international rates 15 per cent). The Hickling-Paisley report insisted this was a key factor in Jamaica’s high crime rate. Hickling opined that if public policy didn’t change in line with the report, “then we’re doomed to repeating the same mistakes of the last 100 years or since Independence”. Governments thumbed their figurative noses at Hickling and Paisley and merrily continued applying insane formulas, producing more violent crime.
Hickling and Paisley identified three key factors that contribute to personality disorder: power-management struggles, psychosexual dysfunction, and dependency issues.
Power management (PM) is one of Jamaica’s most lacking skills (observe any of us in uniform and you’ll understand). Yet ‘power’ is Jamaicans’ most-sought-after ideal. Undereducation ensures most Jamaicans’ inability to handle power and contributes significantly to the dysfunction of persons who achieve even the smallest smidgen of ‘power’. They prioritise their own goals and desires above those of others, ignore other people's perspectives, disregard other people's feelings, and treat ‘underlings’ with scorn and contempt. Their days are spent plotting how to preserve their power and they become aggressive when it’s threatened.
Psychosexual dysfunction (PD) is the inability of a person to experience sexual arousal or to achieve sexual satisfaction under appropriate circumstances. This is caused by physical disorder or, more commonly, psychological problems. Imagine this combined with PM struggles. The need to preserve power, mixed with the struggle to satisfy an inappropriate sexual desire, is a potent recipe for violence.
Dependency issues usually arise from addiction problems with alcohol, drugs, relationships (stalking), sex, work, food or gambling. Family members with these problems develop self-destructive tendencies; learn to repress emotions; and disregard their own needs. They become ‘survivors’. They develop behaviours that help them deny, ignore, or avoid difficult emotions. They detach themselves. They don’t talk. They don’t touch. They don’t confront. They don’t feel. They don’t trust. Before you know it, combined with PM or PD, voila, Ted Kaczynski.
Michael H. Stone, of Columbia College of Physicians & Surgeons, New York, produced an excellent paper on personality disorders and crime (2007) in which he postulated the majority of persons committing violent crime exhibit a personality disorder. He found the disorder could be restricted to one of those described in the Diagnostic & Statistical Manual of Mental Disorders (DSM), or a complex combo as was propounded by Hickling and Paisley.
However, Stone allowed for the possibility that the personality of certain violent offenders may not be in DSM, such as psychopathic, sadistic, hypomanic, explosive-irritable, passive-aggressive or depressive.
Stone also propounded that, while the connection between personality configuration and crime type may be quite close, as in the case of mass murder or serial sexual homicide, a single murder, especially within the family, may be committed by persons of any personality type.
He wrote:
“One way of understanding personality disorders, in general, is to view them as habitual dispositions toward the interpersonal world that limit one’s options in relation to stressful situations and thus lower adaptiveness. From this perspective, violence, intimidation, unlawful imprisonment and the like represent desperate choices from a (presumably) seriously compromised menu of possible solutions. To take but one example, the jealous man who, in the context of a deteriorating marriage, kills his intent-upon-divorce wife, ‘so that no one else can have her’, is operating within an all-or-none schema.
“According to this schema, a man ‘owns’ his wife totally; the ‘crime’ (in his eyes) of defection is punishable by death; killing her thus constitutes what sociologist Katz has characterised as (from the vantage point of the murderer) righteous slaughter. The more adaptive solution - that both he and his wife might in the long run be better off separating and ultimately finding partners with whom each could be more compatible - is not available to the [husband’s] seriously narrowed mindset. This leaves only the option of uxoricide, which the husband pictures as ‘justified homicide’, but which the community rightly appraises as murder.”
As I write, Jamaica is in another cycle of panic about crime. All sorts of violent and repressive ‘solutions’ are being suggested, including states of emergency; curfews; patrols; and restrictions on bail. Yawn. Been there, done that. I was glad to hear the commissioner promise more ‘cerebral’ solutions, but the bottom line is that it takes cash to care and modern police forces need to be properly funded to acquire personnel and equipment required for 2016. Governments won’t spend what’s essential to reduce crime. With that agenda, calls for resignations of water-carriers-in-baskets are absurd and solve nothing.
There you have it, Aunty Fae. Tell me, does the Jamaica Constabulary Force so much as employ a single personality profiler?
Peace and love.
- Gordon Robinson is an attorney-at-law. Email feedback to columns@gleanerjm.com.