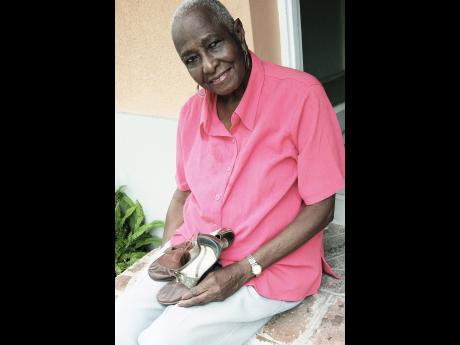 LeVaughn Flynn
In this September 2008 photograph, Dr Cynthia Thompson sits on the steps of her home on Wentworth Avenue, St Andrew, with a pair of spikes she’s had since 1954. The spikes are embellished with the signatures of legendary African-American athletes Jesse Owens and Wilma Rudolph. 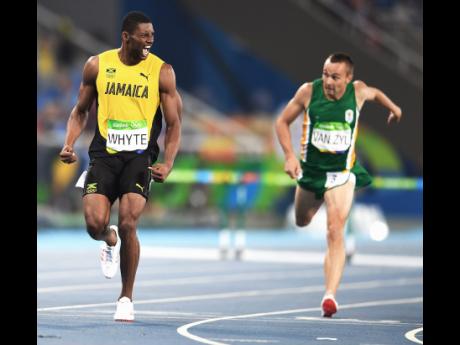 And so you saw history unfurl, and Betsy Sullivan cringes while feeling a deep feeling of satisfaction that, after 44 years, another Jamaican, is representing the country in Olympic diving. And yet, apparently in a deep romance with ignorance, and despite having two Jamaican commentators, ESPN Caribbean kept referring to Yona Knight-Wisdom as the first Jamaican representative in diving in the Games.

There is no space for me on the bandwagon, because as a true track and field aficionado, and to a lesser extent a general sports enthusiast, little in the performance of the medallists and finalists surprises me. Indeed, as Gladys and her other knights celebrated the gracefulness of our first sprint hurdles gold medallist, we non-wagonists didn't have to dig deep into the background of Omar McLeod to know that this young man, described by my colleague, Patrick Anderson as, 'Mr Smooth' since his Fortis days, would go far.

But again, there are so many backstories in our Olympic and track and field history, in particular, that we could write, and in fact, right a complete volume on those who have never tasted Olympic gold but were world-class, if not world-best. Truth is, except for legends Arthur Wint, George Rhoden, Donald Quarrie, Usain Bolt, Shelly-Ann Fraser-Pryce and Veronica Campbell-Brown, along with Deon Hemmings, Melaine Walker and now Elaine Thompson and McLeod, most of our best have never caused the 'Eternal Father' or 'God Save the King/Queen) to be played. Hundreds of athletes did their best, pulled out the performance of their lives. Some got other medals for the effort; some got none

Doubtless, Bolt is an enigma, but he is not our first world-fastest sprinter. More than a century ago, G.C. Foster, for whom the college is named, attempted to run in the 1908 Olympics. However, Jamaica was neither a country nor a member of the International Olympic Committee. As a citizen in a British colony, he conceivably might have been eligible to compete for Britain. Yet, my suspicion is that his blackness would have prevented him from representing the mother country. So he had to just suck it up. Nonetheless, Foster competed in 10 post-Olympic 100-metre races in Britain, vanquishing Irish-American sprinter A.J. Northridge and Olympic finalists Briton, John Morton, American, Nathaniel Sherman, and Irishman Patrick Roche.

Bet hardly anyone remembers or knows that in the same 1948 London games in which Wint and McKenley medalled, Cynthia Thompson finished sixth in the 100-metre finals and set an Olympic record of 25.6 in the heats of the 200 metres. As a matter of fact, three other females made finals, too. Vinton Beckett and Kathleen Russell finished fourth and sixth in the long jump, respectively, and Kathleen Phipps was a high jump finalist as well.

Thompson's story is not as glorious as her namesake at the present Games, because, unlike Elaine, she could not afford a proper ticket, and like my friend, 'Food Head', had to travel on a banana boat. Fortunately, she did not suffer the ignominy as he, when he painted himself green and hid in the hold among the unripe fruit. However, like him, her prospects did not turn to gold as the fruit did, and she didn't medal. After 14 days at sea and unmitigated bouts of seasickness and vomiting, she, by her own description, was "frail by the time I got to London". Cynthia Thompson put the 'her' into heroism.

We know that McKenley had twice suffered disappointment in the 400 metres and 100 metres between 1948 and 1952. Thankfully, his scintillating run in reeling in the Americans gave us our first relay world-record victory over the USA. But flash forward to 1984 to a proud Bertland Cameron, who, bent on shoving the unwarranted braggadocio of American Antonio McKay, ripped a hamstring muscle just after the first 100 metres. Coming to a virtual halt in excruciating pain like a major toothache or labour cramps in his leg, he resumed running to finish fourth and qualified for the final in an awesome 45.10. This time, even without adjusting for his stopping, is faster than two of the three Jamaicans who represented us in Rio. Pundits calibrate the Cameron run as perhaps a sub-43 performance.

In these Games, Shelly is still a hero, and not because of her medal. Running through pain and unable to fully train for the entire season, she gave it her all, and a season's best, getting the bronze as a brawta. What more can one expect than someone peaking and doing her best time of the year on the biggest occasions? This is what young Christania Williams, whose 10.94 in the semi-final, did. Such a time, if equalled, would not have given her a higher finish in the final, although she slowed up because of a leg cramp.

What of Annsert Whyte? He gave of his best in the final of the 400 metres and ran faster than he had ever run, with his third PR of the championship. His female counterparts Ristananna Tracey and Leah Nugent also did their best. For the record, Janieve Russell would have had to have run faster than her best time ever in order to medal. And the sprint hurdlers as well.

True, there were disappointments in the shot put, with O'Dayne Richards failing to match his 21.69 metres, which would have given him Olympic bronze as in last year's World Championships. Similarly, Federick Dacres' lifetime record 68.02, which is also his season's best, would have given him the silver medal. But try throwing even a snide remark or a careless word with an injured throwing finger.

It might be the tip of the iceberg, but three women entered the discus and two in the shot put. Despite none advancing, they have made history and added to our diversity. Don't beat triple jumpers Kimberley Williams and Shaneika Thomas. Even if they had done their personal bests, neither would have done better than Williams' seventh place in this event. Similarly, long jumper Damar Forbes' lifetime best would not have put him on the podium.

So take your time and spare a thought for the 'supporting cast.' I thank every single person who donned the black, green and gold in Rio and in every preceding Olympics.