Luke de Noronha | The deportation charter flight - what’s all the fuss about? 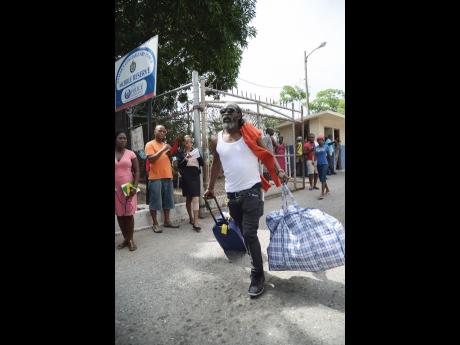 Jermaine Barnaby
A deportee from the United Kingdom leaves the Mobile Reserve facility on September 7.

Forty-two Jamaican nationals were deported from the United Kingdom last Wednesday on a chartered private plane. But why was there a protest in London on Tuesday night outside the Jamaican High Commission? And why are the British media covering this extensively? If this flight on Wednesday was not unusual, as the national security minister assures us, what is all the fuss about?

The British government regularly deports Jamaican nationals. Some of these people have breached immigration controls, and others were convicted of criminal offences (although very few are serious offenders). Some deported persons moved to the UK as children and don't remember the island. Others have family links and may have only been abroad for a short time. In my research, I find that most people are deported from the UK after many years living there and usually leave their family behind: their spouses and their children.

Normally, people are deported on commercial airlines. They sit at the back of a Virgin Atlantic flight from London Gatwick to Montego Bay, accompanied by escorts (these flights go three times a week). Hence, there is a steady flow of Jamaican nationals forcibly returned by the British government. But the charter flight was different. Why?

Last week, I spoke on the phone with people who were booked on the flight. They were being held in immigration detention centres in the UK. One after another, they explained that they had been detained suddenly in the preceding weeks. While signing at reporting centres, complying with the conditions of their immigration status, they had been detained by the authorities. They were then held, moved to detention centres, served with flight directions, and most ended up on the flight.

When the British government charters a private plane, it wants to fill the seats because chartering a plane is incredibly expensive (on average a charter flight costs an estimated J$34 million, which, in this case, would mean around J$800,000 per deportee).

How do you fill the plane? You conduct indiscriminate sweeps of all the Jamaican nationals with uncertain immigration status, detain them, and serve them with the tickets. In other words, charter flights are different because they are more rushed, and people rarely have the time to appeal the decision - or even process what is happening to them.

Charter flights are rushed, and they are also highly secretive. There are no members of the public on the flight to hear you scream, and as such, charter flights are often more violent (there are many reports of this). One of my research participants was deported on the last charter flight, in November 2014, and he was shackled in wrist-to-waist restraints for the duration of the flight, only to be loosened when he ate. He was restrained this way not because he was resisting his removal, but simply because he was a big man. This image of mass deportation, with people in restraints, being forcibly expelled from the UK to Jamaica is a deeply uncomfortable one.

The minister of national security is right when he says there was a charter flight two years ago. The question is, why are they being reintroduced? When David Cameron offered his 'prison gift', it was clear that his administration wanted to increase deportations from the UK to Jamaica. That was his main concern. There may have been a change of prime minister, in both countries, but the desire to streamline the deportation of Jamaicans still seems to be top priority.

Another reason people were outraged in the UK was because many of these Jamaican nationals had not exhausted their appeal rights. UK policy dictates that people can be deported first and have their appeals heard out of country. But can someone really lodge an appeal from Jamaica? How do they communicate with solicitors, prepare documents, and pay for legal fees?

People are angry in the UK, not least deported persons and their loved ones themselves. Jamaicans are being denied access to justice. Forty-two people were rounded up and forced on to a secretive flight, away from their loved ones.

These are the two issues that sting the most: the lack of access to justice and the family separation.

Readers might say, 'Well, they should have behaved themselves. They had a golden opportunity and they blew it.' Perhaps, but for many deported persons, the UK became their home. They were not migrants in any meaningful sense; they

were British. Many people moved to the UK as children, so it wasn't their choice in the first place.

The UK regularly deports young men who moved to the UK aged three or four. Is this justice? Are these people Jamaican? In fact, it's hard to know where this will end. There is one case in the courts at the moment of a young man who was born in the UK and has never been to Jamaica. In fact, he has never left the UK!

However, being born in the UK does not mean you are a British citizen automatically. This young man's mother is Jamaican, and so the British authorities want to deport him to Jamaica because of his criminal record. This is not 'sending somebody home'; this is banishment. And while this individual has never been to Jamaica, is there really so much difference if you leave the island as a toddler?

Others leave Jamaica for the UK as adults, and then turn to crime because they do not have secure immigration status, are unable to work, and so seek income in the informal economy. We must remember, too, that all the research suggests that the criminal justice system is racist at every stage, and black men are more likely to be stopped, arrested, charged, and convicted than their white counterparts.

The charter flight should remind us that deported persons don't call Jamaica home any more. They are not irresponsible migrants who squandered opportunities given to them, nor are they dangerous criminals. Most are people who moved to the UK, made it their home, and were then punished with banishment because the British government wants to appease the public over fears around immigration.

For as long as the British government can pursue its deportation policies without resistance, this political game will play out on the bodies of Jamaican nationals who stand to lose everything.

- Luke de Noronha is a PhD researcher at Oxford University, United Kingdom. His research is focused on examining the issue deportation from the UK to Jamaica. Email feedback to columns@gleanerjm.com.