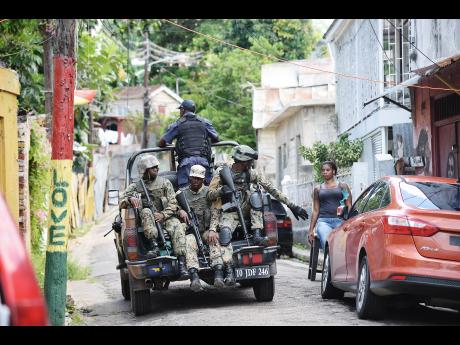 Close to 200 murders in the parish since the year began. Despite an overall drop in violent crimes in the country during the period, the St James Police Division is keeping the nation on its toes.

A number of very disturbing videos have been circulated, along with the police reports. In a yet undisclosed location, a car with at least three assailants pounced on a young man and fired a barrage of bullets while he was purchasing petrol. There is a sort of fearlessness among these young men who think there is little likelihood of being caught or being punished. Or perhaps, they are so out of love with life that they stare death in the face and sneer. After all, it is unthinkable that gunmen could dare ply their murderous trade on Barnett Street, just a few metres from the police station.

The police will need all resources available to put the fear of God and man back into these young men who are creating mayhem in the west. Old, hard policing must be combined with deeper cooperation with the citizens who know who and where every single one of the shooters is. However, the problem in the west is not a police problem; therefore, the solution is not a policing one.

The west - Montego Bay, in particular - is like ingrown hair that one has ignored for too long. However, nothing short of serious surgical intervention will get rid of the deep pus.

Montego Bay and the tourism northwest represent a microcosm of all that went wrong with social and economic policy in this country. On the one hand, there is every evidence of economic expansion and capital development. Doubtless, with the megacity-size hotels and the jobs generated, many were applauding. On the other hand, the question always arose, how much of this is truly trickling down to the masses? It is old developmental policy - focus on growth and everything else will follow downwards.

The stupidity of the trickle-down economics argument is that there is no economic theory that speaks to trickle-down. Capitalist development is by definition an inequitable process, and the only way wealth trickles down, especially in small, open economies, is for there to be deliberate strategies for redistribution.

We knew that the west was a paradox. Yes, we created investments for foreigners, who came in and generated profits and the tourism product improved, and we counted our victories in terms of visitor arrivals. Never mind the negative impact on the environment, the algal growth on the reefs, or the overall impact of the overwhelmed sewage systems.

The problem with the growth-first approach, if it works, is that it puts immense pressure on the price of goods and services since a small set of earners are pursuing the same amount of commodities. Simply put things get dearer, while just a small set of 'lucky' workers and bosses can afford to purchase. So, are goods and services in Montego Bay cheaper than in Kingston, St Thomas, or St Mary?

Then there is the issue of decent work. One might think that it is simply benevolence, but since 2000, I have been preaching about the evidence that there is a strong correlation between decent work and the level of worker productivity, as well as conflict at the workplace and social violence. Supporting research and common sense are so clear that sighted people can read the Braille.

When poor labour practices lead to substandard conditions of work and fragile employment contracts, the person who typically suffers the most is the young subadult male. Thus, when the poor wages or parents and household heads can't deal with the young man who is too untrained to get a job and not yet ready for university or college because he didn't complete grade 11, what do you think happens when he gets 'shub out'?

Well-meaning clergymen and other pseudo-social scientists love to jump on the back of 'poor family structure' children being born out of wedlock and yadda-yadda. Nonetheless, we have been 80 per cent 'bastards' since the first slave ships landed here. None of the family features has changed drastically, and many of the gangsters have fathers.

However, no one noticed that youth unemployment was more than twice the national average in 2000, and we didn't notice that the flagship boys' school in St James, Cornwall College, had not featured in the top 40 CSEC results in close to a decade. In 2007, leading up to the general election, none of the political parties put an explicit youth policy in its manifesto.

And they act surprised. Well, brace for Matthew, not the storm, but the tax collector, whose dividends are now on display.

Still, the silver lining is that it has awakened the entire nation and the political parties are on the same page. It is not too late to fix it, but it takes work and honesty.