Orville Taylor | The audacity of grope 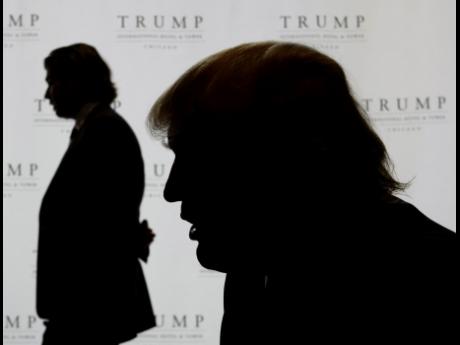 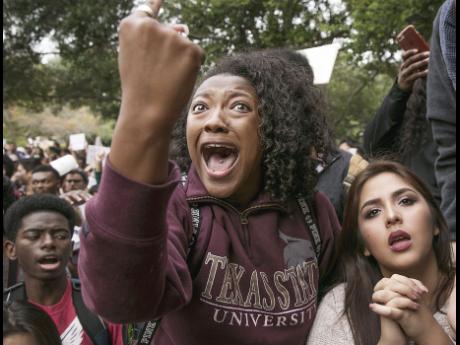 AP
Arielle Moore, 19, argues with a Trump supporter during a protest at Texas State University in San Marcos, Texas, on Thursday, November 10, in opposition to Donald Trump's presidential election victory.
1
2

What happened in North America makes the homophones 'in continent' and 'incontinent' synonyms as well. As we collectively pinch ourselves to arise from the never-ending dream that Donald Trump, Mr Hair Force One, orange-faced like the Halloween pumpkin, has gone a shade darker and has reddened the White House once more.

As incredulous as the world is, Trump is the president-elect of the greatest and most powerful nation on earth. With his small hands, he groped and grabbed the P and stuck his index finger and hooked it on to the 'resident'. Like it or not, protest if you all want, post facto, unless something dramatic occurs, he will be the occupant of 1600 Pennsylvania Avenue for the next four years. Now he is free to seek new frontiers.

Scary, he had promised/threatened to "make America great again". This would entail locking up his adversary, Democratic nominee Hillary Clinton, by appointing a special prosecutor, build a wall to keep out the Mexicans who have a view to migrate illegally, and round up all undocumented immigrants living in the USA and deport them back to where they came from. Importantly, he intends to end birthright citizenship. Therefore, as with the second-generation Haitians living in the Dominican Republic, children who are born in the USA to illegal immigrants and perhaps persons on visitors, students or other non-resident visas, will not automatically gain American citizenship.

On top of that, he is going to ban Muslims from entering the country, bomb the faecal matter out of the families of suspected terrorists, a la ISIS, reduce American support to NATO, while embracing anti-NATO Russian President Vladimir Putin, withdraw from the UN-sanctioned nuclear treaty with Iran, beef up the military, and allow waterboarding (torture) of prisoners of war.

By the way, he intends to eliminate 'gun-free zones' at military bases and schools and allow persons to carry concealed firearms in all 50 states.

In putting America back to the pinnacle of international trade, he will bring back jobs from China and displace the hegemony of that nation. He will also do away with the regional trade agreement with Canada and Mexico.

THE WRITING ON THE WALL

Of course, there's many a slip twixt the cup and the lip, and he might find that speech and action have a bigger gap than he can put his hands across. True, he is likely to have an easier time than Barack Obama, because he has what looks like a 239:193 ratio in the House of Representatives and a 51:47 advantage in the Senate. However, there are supposedly large enough numbers of Republicans who do not share these intentions, and with the opposition from the Democrats, many could stall.

Nonetheless, Trump's success in the polls, although shocking to most people, had the writing on the wall and the writhing in the halls of the Democratic Party since early 2016. In every poll of significance between late April and early May 2016, it was reported that he would have beaten Clinton in a head-to head contest. Indeed, he must have been on to something a decade ago, when he remarked that when one is a star as he is, one can do anything. Well, he beat Hillary as if she were a pickpocket caught in Coronation Market, and came away with the presidency.

Interestingly, for all his demonstrated misogyny, he had 53 per cent of the white female vote and, incredibly, 62 per cent of the non-college educated Caucasian women. In contrast, only 32 per cent of this last group were with Clinton. Clearly not only did he have his finger on the pulse of the swooning 'powerless' women, he was groping, but they were feeling him, too. Please note I did mention this in an earlier column that the operative expression was, "They will let you."

Possibly, it could be that Clinton suffered from electile fatigue, as female politicians who remain too long in the public sphere without clearly defining their legacies do. Thus, as obnoxious as Trump is, the voters were just 'clyde' of her and her almost 40 years in representational politics. And if she learned any lessons about the impact of performance in debates in other countries, it still made no difference. Maybe her moment had simply passed. Does Hillary look like a loser?

Yet, it could simply be that America is not what its motto 'E Pluribus Unum' (out of many one) says. As I indicated in another column, America is still a very sexist country, with females earning significantly less than their male counterparts, labour laws on maternity benefits largely non-existent, and women being under-represented in politics. Around 100 of the UN's 193 members, including five in CARICOM, have elected female heads of government. Remember, it is still not yet 100 years since American women earned the right to vote. Our women earned this right in 1918 and the USA in 1920.

Nonetheless, a scrupulous examination of American history should have predicted the outcome. "Once you go black, you get pushed back." The 1865 emancipation of black Americans from slavery led to the assassination of Abraham Lincoln, the ascendancy of Andrew Johnson, and a century of oppression under 'Reconstruction', including the rise of the Ku Klux Klan. Ironically, the Klan, which backs Trump with fists, guns and hate rhetoric, is the creation of Hillary's Democratic Party. Similarly, the concessions made by John F. Kennedy to the civil-rights movement led to his own murder in 1963 and unmitigated state violence against black people. After the 1966 Harper v Virginia Board of Elections decision that finally gave black Americans the unrestricted right to vote, the resistance to black enfranchisement led to the murder of Martin Luther King and John F. Kennedy's younger brother, Senator Robert Kennedy, in 1968.

Somehow, in 2008, we had the audacity of hope; not grope and a half-white man, called by the 'N' word by Trump's largest chunk of supporters, managed to take his melanised wife and their two picaninnies into the great house and soiled the interior. It's pushback again.

My hope is that Trump was simply making empty speeches like his leaked video and he doesn't intend to carry them out. I hope he will make America 'great', but if the 'again' is any of what its history is, I'm going to beg my dog for some of my supper that he is eating.