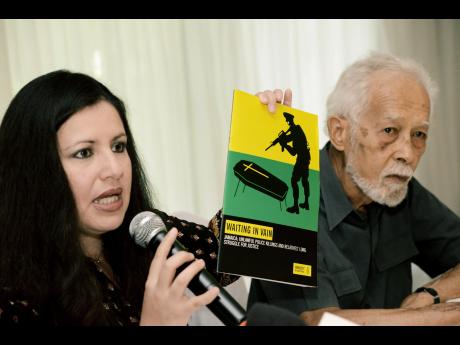 Rudolph Brown
Erika Guevara-Rosas, Americas director at Amnesty International, speaks to journalists during last Wednesday's launch of Amnesty International's new report into the impact of police killings on families. Beside her is Horace Levy, executive director of Jamaicans for Justice.

Our opposition leader had a flashback to the days when 'no gyal, no bwoy' couldn't test her, and in a moment of fury issued a stern warning that she will return to the constituency of NE St Ann and won't go alone.

Of course, I imagine that she will be returning like Terminator/Commando Arnold Schwarzenegger, but in the company of her bodyguards and the Fresh Prince, P.J. Patterson, and, perhaps, Michael Manley's ghost to restore peace and loyalty to the People's National Party (PNP). One is free to speculate about who she would 'carry'.

On the other hand, a recently released YouTube video showed Daryl Vaz, a senior officer of the Jamaica Labour Party (JLP), in such an animated style, he could be easily called a tailor, as he cut cloth when provoked to wrath. This he did in public, and unlike my Olympian friend who, leading up to the last general election, ran a relay of expletives and almost blew it on the third leg.

It is reported that it is an old video of Vaz that has been resurrected. However, like the decade-old tape of Donald Trump boasting that he can do whatever he wants and grab JL, PN and any other Ps, it simply puts into focus the importance of people running for office recognising that their public utterances haunt like stale sardine on one's breath.

Moreover, speaking of ghosts, we know that 'duppy know who fi frighten', because, apparently, our Jamaican leaders in both elected and bureaucratic offices can easily be seen by the international community as facilitating lawlessness, and in particular, human-rights violations. Worse, we have nationals who are hell-bent on giving the worst picture of their country, even as they comfortably live here.

Now once more, Amnesty International has turned to its Caribbean beating stick, Jamaica, and points to the thousands of alleged police-perpetrated murders. Perhaps since the American dollar is worth more than 129 Jamaican bills, there is the belief that there is in play another form of mathematics as well.

According to Erika Guevara-Rosas, America's director at Amnesty International, "Jamaica's shocking culture of fear and violence is allowing police officers to get away with hundreds of unlawful killings every year. Shocking injustice is the norm." She should check the numbers.

While I would hasten to admit that there is, indeed, a likelihood that Jamaican police officers do engage in extrajudicial executions, it is extremely disingenuous to imply that there is a culture of impunity. Indeed, there has been a consistent pattern of reduction in police killing of suspected criminals/civilians over the past six years or so. Whether our Independent Commission of Investigations (INDECOM) or the Police High Command wants to take credit for it is irrelevant. What matters is that the Jamaican authorities have been making sustained efforts to improve compliance with their UN-crafted Use of Force Policy, and there has been success.

Yet, we have to admit that Jamaica is a violent society and has one of the highest homicide rates in the world. Worse, it has a police homicide rate that is more than four times that of the population. For all the criticism of the Jamaican security forces and the strong likelihood of killer cops in their midst, an average of 11 police officers were murdered each year between 2000 and 2014. So, it is not a mere debate as to whether the Jamaican cops need to use deadly force to protect the public and themselves.

Of course, the suspects/victims are invariably armed and, according to Amnesty, might have planted weapons on them.

Again, I do believe that there are cases when cops do that, but to suggest that it is the majority, without any evidence, is reckless and prejudicial and simply unscientific. Not even INDECOM, with its perceived antagonism towards cops, makes such a claim.

After all, it is difficult to refute the evidence when police officers have bullets in their bodies and corpses that did not come from their service weapons. Even so, INDECOM's own admission in its last report has been that there has been a massive 50 per cent reduction in police killings in the past year, even when the national homicide rate increased.

Nevertheless, with regard to the activities of law enforcement, we need to juxtapose the deeds of American cops against their Jamaican counterparts. As indicated in previous columns, American cops have consistently killed more unarmed civilians in the past decade, despite the level of threat in the society declining; America has enjoyed a sustained reduction in homicides since the Obama presidency.

Imagine, the head of America's security forces has admitted that there has been torture of civilian combatants in the War on Terror. Furthermore, the president-elect had campaigned on the promise to wantonly bomb civilian family members of suspected Islamic terrorists. But that is war. American police use methods that would make Pilate baulk. Tell me under what circumstance a Jamaican police officer can push a 65-year-old grandmother on the ground and handcuff her? When do you use pepper spray on a wheelchair user? And where is it acceptable to tell a bank teller dressed in his suit to lie on the ground after he is 'stopped and frisked?'

I am not saying that Jamaican police are fully compliant, but one needs to recognise the efforts and acknowledge the progress. But this is Jamaica, a country with the 10th freest press in the world; America is 41st, and the flip side of that is we exaggerate and highlight the worst about ourselves while ignoring the inconvenient positives we have made.

Anyway, tomorrow is our parish council elections, and our democracy is robust. America got it in 1966. However, we have had 72 years of universal adult suffrage and more than 30 elections of parliamentarians and parish councillors. We have never assassinated an elected official and we have never had to protest the overall results of any general or parish council election. Go and vote and make a difference, but no threats or 'bad wud'. And Amnesty, give us an amnesty nuh!

• Dr Orville Taylor is senior lecturer in sociology at the UWI, a radio talk-show host, and author of 'Broken Promises, Hearts and Pockets'. Email feedback to columns@gleanerjm.com and tayloronblackline@hotmail.com.